Nasty’s Is Anything But

Put your feet up at this new Thornbury dive bar that takes upcycling to the max and has a super-tight drinks list (that means no cocktails). 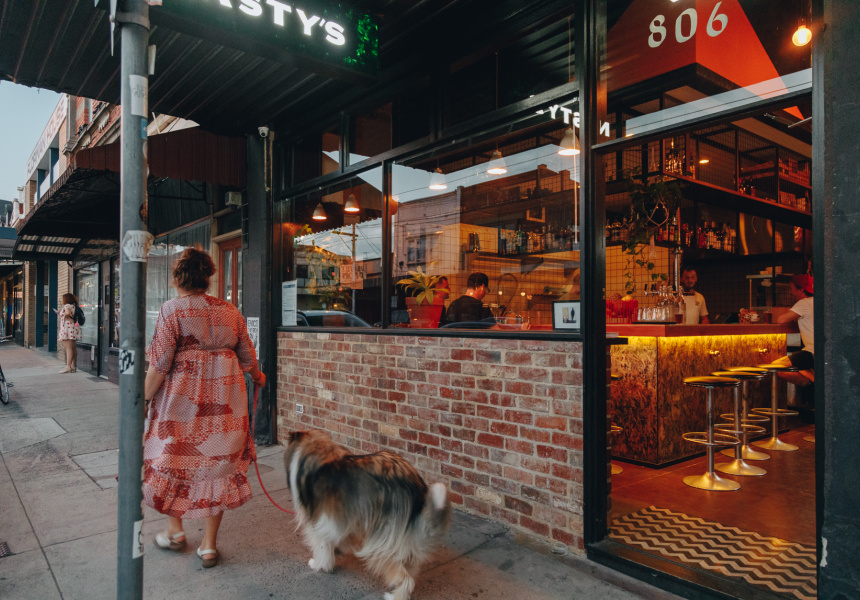 “It’s a nickname of mine,” Nick Matheson says of Nasty’s, his new Thornbury bar. “But I don’t think people call me that because they actually think I’m nasty. I think people think I’m nice.”

Matheson is actually quite a lovely, laid-back bloke, and that’s reflected in the vibe at Nasty’s. The former Easey’s bartender designed and built the low-key terrace hangout himself, with help from close friend Danny Connick. “Building Nasty’s was a huge undertaking,” Matheson says. “It took me five months and it hasn’t been easy.”

What is easy about this joint is settling in. Visually nothing matches, which feels odd for a bar opening in 2019, but it has a comforting effect – knowing you won’t find any minimal Scandi design or velvet millennial pink couches here is calming (though you will find the odd monstera plant). This is one incredibly chilled-out watering hole, and the further you venture inside, the more personality it reveals.

The first thing you’ll notice upon entering the dimly-lit front bar is the graffitied wall on the right by Mitch Walder (an “absolute dude”) in frenzied acid green and orange. A large window looks out onto High Street and you can plonk yourself along the blond timber benches that skirt the walls and bar, and hang your jacket on one of the doorknobs protruding underneath. The concrete floors are painted maroon, and a large metal cage encases the tiny, soon-to-open kitchen, which will churn out booze-friendly snacks like cheese toasties and fried chicken.

Move deeper into the building to find a wall holding a dozen or so framed dog portraits, which Matheson collected from his friends. Further in, small rooms are filled with old ironing boards, kegs and skateboard decks that function as furniture. One couch is made of old Saab car seats (complete with cup holders) found at a Pick-A-Part. Two bathtubs have been conjoined into a corner seat. Further out the back, there’s a beer garden, and there are plans to open the upstairs in coming months. On the speakers, you’ll hear anything from hip-hop to Johnny Cash.

When asked about the mismatched fit-out, Matheson says it was designed on a shoestring budget – but he also loves the Gumtree purchases and hard rubbish finds that make up the space. “It’s like an upcycled dive bar,” he says. “I didn’t want to take it too seriously.”

This candour carries through to the drinks menu. There’s not a cocktail in sight (though Matheson says that if you ask nicely, he’ll still make you one). Instead, there’s a tight selection of spirits, beers and wine.

“At the moment it’s just everything I dig, everything I’m into – I guess you could call it ‘me centric’,” Matheson laughs. “But I like to choose local, and anything with a nice story to it is good too. I wanted the bar to be a good jumping-off point. The intention is to expand over time, as my palate grows.”

Brews might come from Bodriggy Brewing Co in Abbotsford or Hargreaves Hill in Yarra Glen. There’s a solid selection of classic spirits alongside booze that Matheson feels a personal connection to, such as gin from Mountain Distilling, produced near his home town of Gisborne.

“Man, when I open that bottle and smell it, it literally smells like the mountain that overlooks Gisborne,” Matheson says. “[They] foraged everything from there, and it’s really explosive on the palate, but super balanced.”

This article was first published on February 28, 2019. Menu items may have changed since publication.