More Than Just a Cooking Class for These Asylum Seekers 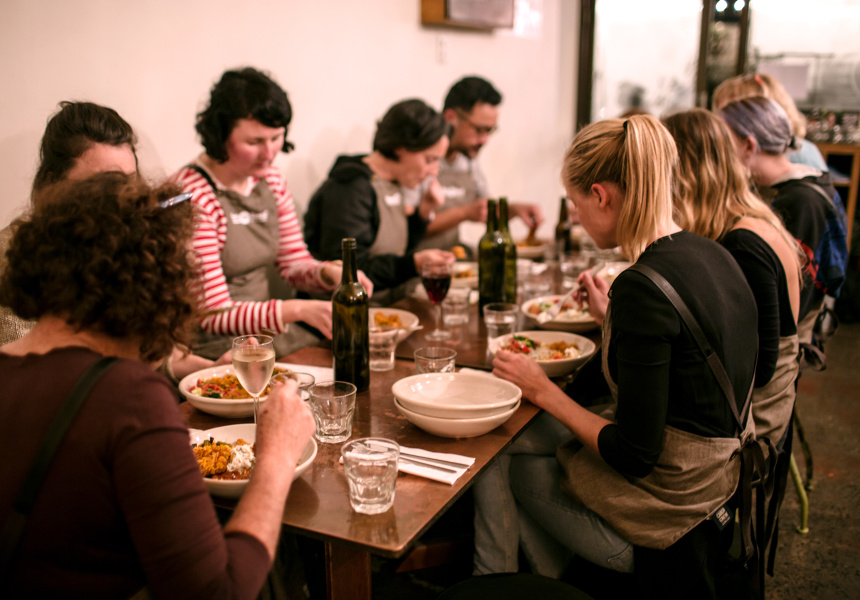 Hamed started as a kitchen hand before opening a traditional Persian restaurant in Iran’s capital, Tehran. He fled in 2012 with his wife, who was four months pregnant at the time.

En route to Australia, via Indonesia, he and his wife took a small boat that was escorted to Christmas Island, where they were detained. They were finally resettled in Melbourne, where they had their first child, a girl. They are currently on bridging visas while their applications for asylum are being assessed.

Hamed has had no work rights until recently. His employment with Free to Feed – a pop-up cooking school with all classes run by asylum seekers and refugees – is his first paid job in Australia.

He learnt of the organisation through the Asylum Seeker Resource Centre, where he works as a volunteer. Loretta and Daniel Bolotin set up the social enterprise in late 2015 to provide asylum seekers and refugees with training, mentoring and a range of skills to help them find future employment.

Still in its infancy, Free to Feed has two other instructors teaching classes – Mahshid, also from Iran, and Niro from Sri Lanka. Asylum seekers from Kenya and Pakistan have also undergone training and are waiting in the wings to lead classes. Recruitment of asylum seekers and refugees for the program is a rolling process. When Free to Feed reaches a critical mass of instructors, different cuisines and recipes, it hopes to release a cookbook.

I attend one of Hamed’s classes on a chilly Sunday evening at Kau cafe in Northcote.

The intimate space is filled with the sounds of Farhad Mehrad, an Iranian musician who rose to prominence before the Iranian Revolution in 1979. His haunting song Booye Eydi (loosely translated as “A Scent of the New Year”) is a favourite of Hamed’s and reminds him of his homeland.

The music quickly gives way to the excited chatter of the 10 participants eager to learn more of the cuisine and culture Hamed will be sharing.

He is a charming, tall man with a broad grin. While he apologises for his command of English, he is easy to understand and speaks in an enthusiastic, engaging manner. He offers us traditional honey, saffron and cardamom tea, as well as a fresh brew made out of sour cherries – a warm start to the occasion, both figuratively and literally.

The first dish we learn to make is yatimcheh, a vegetable stew Hamed despised as a child, but now loves and serves to his own family (he has a two-month-old son and his daughter is now three). Accompanying this is lubia polow, a saffron rice, green bean and tomato dish. The real magic lies in the piece of Lebanese bread placed in the bottom of the pan as it cooks. It crisps up brilliantly and offers a welcome crunch when sprinkled through the dish.

Felafel is a staple in the Middle East and every country has its own spin on it. The Persian version features ground chickpeas, capsicum and garlic. While felafel-making gadgets exist, in this class we mould them by hand. This sensory experience immediately creates a bond between the participants, despite most of us only having met tonight. Little surprise, then, that Free to Feed is pitching its classes as suitable for organisations seeking team-building experiences (it also runs home gatherings where the instructors come to you).

Between mouthfuls of the delicate rosewater and pistachio halva the group has just made, Hamed asks us whether we are enjoying the food. We are. But perhaps more enjoyable is seeing someone who has fled turmoil making his way in Australia. His enthusiasm for Persian cooking is undoubted, as is his desire to share this with others – through these cooking classes for now, and perhaps in his own small cafe in the future.

Details of Free to Feed’s cooking classes, taking place in various locations, can be found here.