To Moon Dog and Back

Melbourne's most experimental brewery gets an on-site bar in Abbotsford. 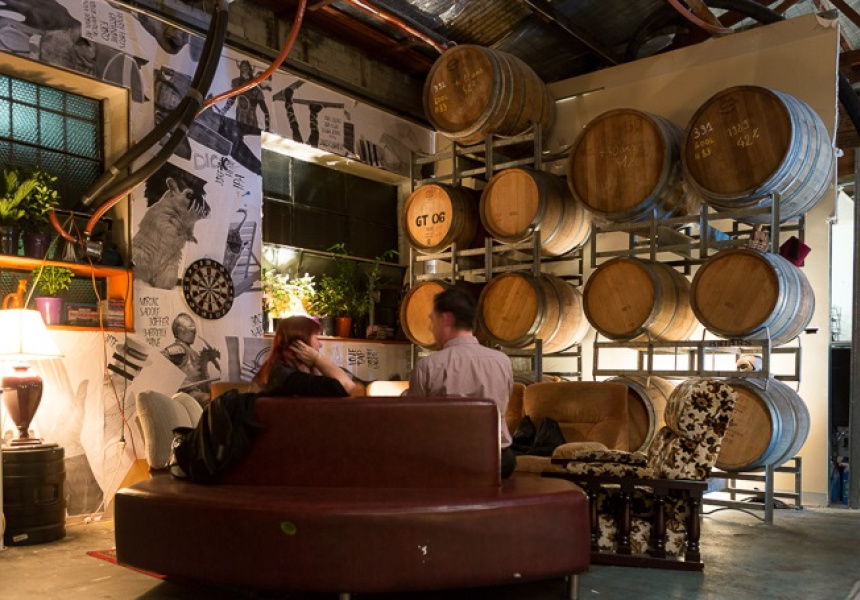 It's not the likeliest place for a bar: a seedy street in Abbotsford's industrial quarter, surrounded by panel-beating shops and brothels. But then Moon Dog has never bothered with convention. Started four years ago by brothers Josh and Jake Uljans and their mate Karl van Buuren, the brewery turned heads with its very first batch, a potent double IPA. Since then, it's successfully experimented with outlandish ingredients such as watermelon, truffle, chilli, pumpkin and wild yeast.

“This location is great,” van Buuren says. “We can make as much noise as we want." And the new bar does get rowdy – there's free popcorn, table tennis, and a different food truck parked out the front each night. Eight taps rescued from neighbouring CUB pour everything from Love Tap, a relatively plain lager, to Perverse Sexual Amalgam, a tangy drop which tastes like fuller-bodied champagne spiked with balsamic vinegar.

It's this style-agnostic attitude which has made the brewery a cult success. Six months ago the site's roller door was often up, with mountains of new packaging threatening to spill out onto the street. Only when the adjacent warehouse came up for rent were the trio able to knock a hole through the dividing wall, doubling the floor space and putting in the long-anticipated public bar. “A bar is the best way to showcase not just your beers, but who you are and what you're all about," Josh Uljans says.

As it turns out, Moon Dog's founders have as much character as their products. A "secret" bookcase door connects the old site with the new. The bar's walls are adorned with such oddities as a framed photo of John Candy and a mounted pink elephant toy van Buuren got when he was born "from a very disturbed uncle." "It's not a contrived, made-up version of what Moon Dog is about," Uljans says. "We made it into a place we would want to be at."