A Monster Good Enough to Eat 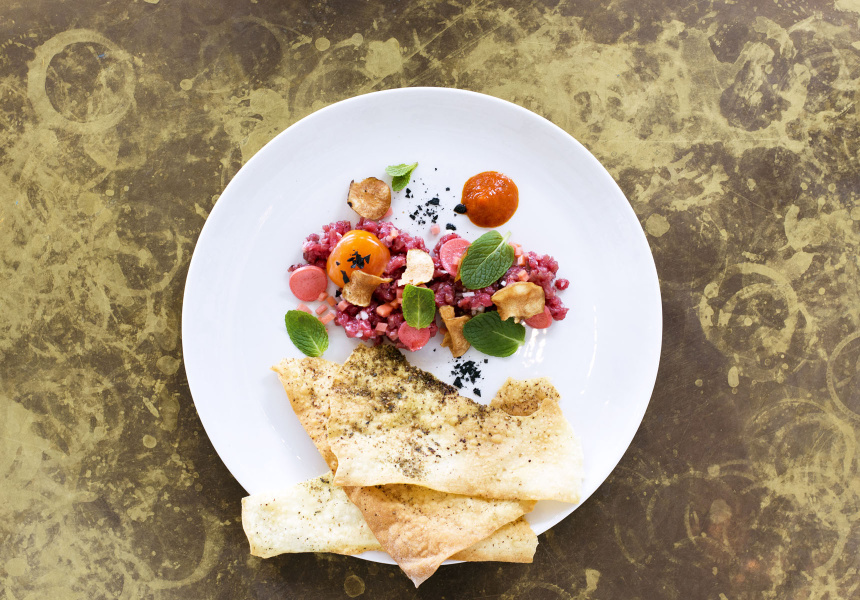 A lot of curious gazes were set squarely on the work-in-progress lobby of Canberra’s Hotel Hotel when it opened in the Nishi building last summer. Upon its arrival, the 68-room boutique hotel in the stylish NewActon precinct spelling a welcome change in Australian hotel convention. The collaborative work of a large group of creatives and designers – including March Studios, Studio Round, Right Angle Studio, The Good Copy, Kloke, Oculus and Broached Commissions – the launch set a match to Canberra’s reputation for being dull, drawing visitors from all over Australia and beyond.

Chef Sean McConnell (younger brother of Andrew McConnell, celebrated chef and owner of some of Melbourne’s top restaurants including Cumulus Inc., Luxembourg and Supernormal and Matt McConnell of Bar Lourinhã and Casa Ciuccio) heads up Monster, the hotel’s restaurant and bar. McConnell is well known for his work at nearby cafe, Mocan and Green Grout and so, understandably, before the doors opened, talk of many possible concepts was rife. The opening date was repeatedly delayed a number of times and just before opening, the restaurant’s name was changed from Godzilla to Monster. All of these alterations only added to speculation about what exactly would emerge from the deep.

When we visit, Monster has been open for just three weeks, and McConnell is enthusiastic about how it’s been received. “There have been a lot of eyes on the project for a long time, so the delay just encouraged that interest,” he says as people wander in and out of the fluid, open space just near reception. For a chef who once swore he’d never work in a hotel kitchen again – after clocking five years at resorts in Vanuatu – he’s certainly changed his tune. “When I finished there I almost made a pact with myself that I'd never do it again,” he says. “Hotels are difficult because you don't choose your audience, your audience chooses you.”

Chefs work calmly in black T-shirts in a wide-open kitchen set opposite a long, high bar. And with tables set beneath art-deco style lighting, the space lends itself to settling in. In the heart of winter, a cavernous fire warms clusters of deep leather couches. In the nearby library, visitors sip wine or espresso while flipping through a selection of design-focused publications by Perimeter Books, a Melbourne niche publisher. Nooks and crannies abound, but nothing feels cordoned off here. Travellers of all sorts come and go; businessmen with their Scotch, residents from the apartments above popping in for a wine with friends and locals eager to see what all the fuss is about.

In an ambitious move, the restaurant opens from 6.30am until 1am without a break, and includes room service offering the full à la carte menu. If you’ve never eaten a pork neck and kimchi steamed bun, or pickled crudités with warm bagna cauda while soaking in a giant, Aesop-infused stone bathtub, it’s an experience to be savoured in one of Hotel Hotel’s suites.

“We've adapted the menu to suit all sorts of different travellers. You can have a quick meal if you like, a quick breakfast or pastry on the way out in the morning, or you can sit down and tuck into a pretty serious meal,” says McConnell. “I didn't want to do 24-hour room service and have a duty manager prepare a cheese plate at four in the morning not up to standard. So we extended the kitchen hours to incorporate a late-night offering just because I think a hotel like this deserves it.”

McConnell’s food is inspired by his travels, and that’s easy to see on the menu. Flavours and spices of the Middle East are peppered throughout; dukkah here, labne and locally raised beef kibbeh there. Hints from Spain are apparent too, such as plates of jamon Iberico with pickled chilli. But the menu is not without a twinge of humour. A tangle of crunchy, curly, salt-cod churros, for example, is an inspired bar snack, and a toasty yabby jaffle with crème fraiche and horseradish also heads straight to the late-night eats leader board. “This venue was always supposed to be non-exclusive and welcoming to all, so we didn't want to take the food too seriously,” says McConnell. “Nothing too finicky or fussy, no obnoxious wording, no silly garnishes. Food that people feel comfortable ordering.” The deep, fireside couches and local wine list also help. For breakfast, house-made crumpets with the hotel’s own honey, or a Snowy River trout hash-brown with a fried egg and soft herbs send travellers off on their way happy.

Though McConnell intends to change the menu according to the season and any interesting produce he finds on his travels, one dish has already been slated to be a permanent fixture on the Monster menu. “The lamb can't come off the menu from the looks of things,” he says. “It's going crazy.” The lamb in question is a pulled shoulder with pistachio, yoghurt, crisped, almost transparent vine leaves, pomegranate and shards of brik pastry. It’s a mainstay for a reason.

Broadsheet visited Monster as a guest of Hotel Hotel. 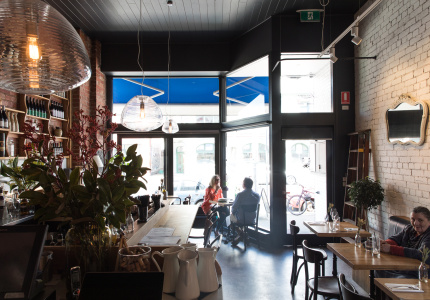