Strawberry sour and Japanese-inspired dark lager from a Holgate alum. The bold American India Pale Ales of San Diego and the smoked beers of Bamberg in Germany are just two styles that inform the offering at Melbourne’s newest brewery, Molly Rose.

And founder Nic Sandry made sure he experienced those beers – and more – in their homelands as part of a four-month research trip to Japan, the US, Belgium, Germany and England last year. He spent time with brewers, sake makers and distillers along the way, then did a wine-grape harvest season back in Australia before beginning his first batch for Molly Rose.

Sandry studied chemistry at university, and homebrewed for fun “to have delicious cheap beer on tap at home”, before moving to Perth to earn a graduate diploma in brewing. He spent five years in various roles “from floor scrubber to head brewer” at breweries including Perth’s Little Creatures, Byron Bay’s Stone and Wood and Holgate Brewhouse in Woodend, all while continuing his experiemental homebrewing on the side.

To launch the brand, Sandry pre-sold packs of six different Molly Rose beers to raise funds. The bottles spanned the globe in influence, and included a Japanese-style dark lager, a barrel-fermented Belgian saison, and a beer co-fermented with shiraz grapes. The wine influence comes from girlfriend, Callie Jemmeson, who co-owns Pachamama Wines in the Strathbogie Ranges. It’s also where Sandry currently brews his beer while he searches for a permanent base for a brewpub in Melbourne.

While the initial online offering sold out, you can find a small amount of Sandry’s stuff at select Melbourne bars and bottle shops, including a hoppy, funky Belgian-inspired saison called Matilde. A barrel-aged strawberry sour ale, Sour Tom, will hit shelves soon. Sandry says if there’s one beer that typifies Molly Rose, it’s that one: you can smash it back and enjoy without too much thought, or drink with consideration and find depth of fruit flavours and hints of oak.

While journeys overseas inspired the range, the name Molly Rose comes from closer to home: Molly and Rose were the names of Sandry’s two late grandmothers. He remembers them both as generous and welcoming – something he hopes his brewery espouses. 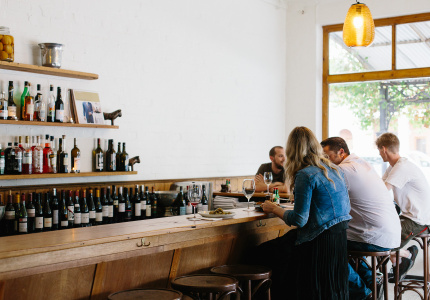