A Mini Cooper covered in 3000 sweet, colourful macarons is driving around the city today. 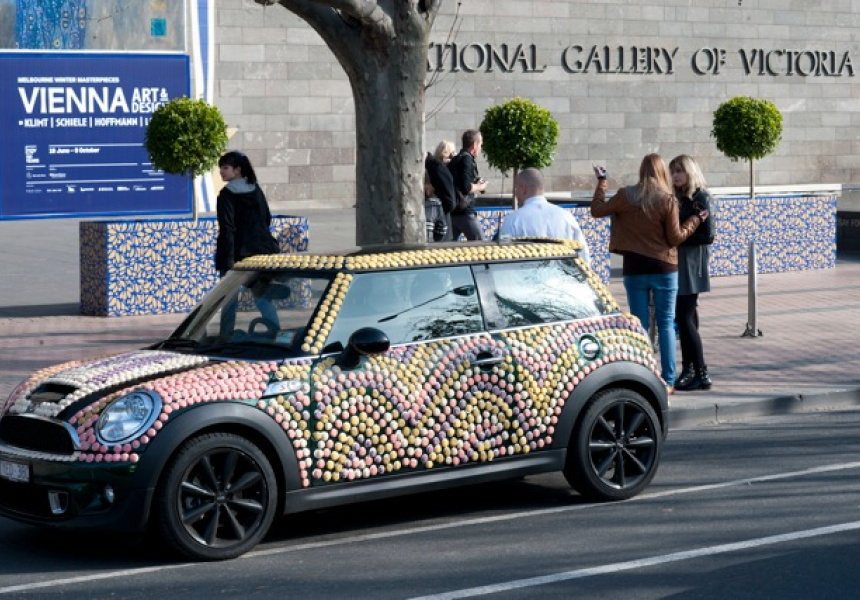 Have you seen this car driving round the city this morning? A Mini Cooper covered entirely with macarons (3000 in fact) of different colours and flavours, each piped by Le Petit Gateau’s acclaimed pastry chef Pierrick Boyer. The completed ‘Miniron’ has been driving in sweet circles around the city from 6.30am and will be on the road until early this evening, stopping at secret locations around the city to pose for photographs.

Inaugurated by the volunteer-based team behind Melbourne Macaron with funding support from the Melbourne Awesome Foundation, the project – and the small but unanimously delicious French treat – has come a long way. The unique homage to Ladurée’s creation of ganache-filled macarons in the 1900s has morphed into a rolling spectacle of 3000 delectable spare tires (or rather, macarons) tastefully affixed to a Mini. The proud Miniron took a total of 180 man-hours to complete, with 22 macaron-worshipping volunteers behind the scenes preparing for the big day.

People who catch the Miniron cruising about the CBD are encouraged to join the online buzz by using the Twitter tag #Miniron or @melbmacaron or by posting on the Melbourne Macaron Facebook page.