Attention raw fish aficionados: you can cancel that flight to Tokyo. Melbourne’s sushi game just took a big step up. In an era where Melbourne’s restaurant scene often borders on an elbows-out spectator sport (with the lengthy line-ups, tourist crowds and deafening noise levels to match), the concept of a serenely hushed, bookings-only dining room manned by a fleet of politely hospitable staff can start to seem incredibly seductive.

Add to this the fact that this particular spot is also quietly serving up one of the most authentically Japanese sushi experiences in the city. And when we say sushi, we’re talking pure, unadulterated nigiri (raw fish on seasoned rice), no hand rolls, no teriyaki, no side orders of miso. Think traditional. Think Jiro. Think delicious.

Positioned in a non-descript residential Richmond backstreet, the intimate 40-seat restaurant is the first solo outing for talented Japanese sushi master, Koichi Minamishima, and his ambition is disarmingly modest: “to fill each customer with joy through the art of sushi”.

Melbourne sushi fans will know the chef’s calmly concentrated face; he clocked up 15 years at CBD stalwart Kenzan, most recently as their head sushi chef – so it’s fair to say he’s well versed in the mysterious art of high-end nigiri.

As with the best of Japan’s traditional sushi restaurants, the offering here is typically minimal. Option one is $150 per person for a 15-course sushi omakase (chef’s selection) seated at the long bar, where Minamishima and his coiffed sidekick Hajime Horiguchi precisely prepare and deliver each course to you personally, one tasty morsel at a time.

Option two (also $150 per person) is perhaps better suited to parties of three or more and takes place in the elegantly understated, low-lit dining room, with table service delivered by the impeccably professional wait staff. Included is a handful of shared dishes to start, followed by 10 courses of (individual) sushi, then dessert.

Because there’s such minimal intervention between ocean and plate with this style of dining, you begin to get an appreciation for the fastidiousness of top-end Japanese sushi chefs.

Here, you’ll taste fish in a way that you never have before. Seafood of the highest quality is sourced locally and in some cases, flown-in fresh from Tokyo’s famed Tsukiji Fish Market. The offering changes daily but you might find delicacies such as engawa (sea flounder fin), torigai (Japanese cockle) or even uni (sea urchin roe) from Hokkaido.

With such obvious devotion to their craft, Minamishima and Horiguchi elevate each piece of protein to new levels – with often little more than a few clever knife scores, a faint smear of wasabi and a lick of soy or ponzu. It’s magic.

Restaurant manager and sommelier Randolph Cheung (ex-The Atlantic, Flower Drum) oversees the seamless front-of-house experience with the graciousness of a true professional and is legendary in the industry for his encyclopaedic wine knowledge. Here, with sake as a focus, he’s worked together with chef Minamishima to pair each course with some truly outstanding sake, beautifully showcasing the drink’s unparalleled versatility.

There are plenty of cheaper places to eat sushi in Melbourne, but the opportunity to experience sushi at this level (without an airfare) is another thing altogether. And it’s not just the sushi; it’s the humble devotion to an age-old art. It’s the attention to detail, evident at every turn. This is where the magic happens. 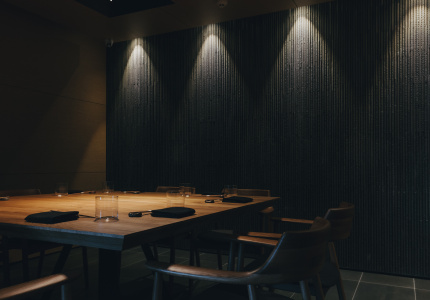