The MIFF Pocketbook: Places to Book

Sometimes there’s no time to queue. Sometimes you’re just not in the mood. Save yourself the hassle and book ahead. Whether you’re time poor, from out of town, or just want the peace of mind, booking is a good thing. We’ve put together a list of venues where you can reserve a table before or after indulging your senses at MIFF this weekend.

Mesa Verde
Has the working week left you in need of something light-hearted? Mistress America is a comic gem showing as part of the Closing Gala in a wrap of films this weekend. While most might feel braving the staircase to Mexican-inspired Mesa Verde is comical enough, if you reserve a spot for some pre-show Margaritas or post-film tequilas and tacos, the chuckles will continue.

Nieuw Amsterdam
They say New York is where you can have it all, any time. Fittingly, Russell Brand’s documentary Brand: A Second Coming, is a tale of exactly that, where a world of unlimited propositions took him to a standstill in his life and career. Catch his side of the story this Sunday, before or after setting the scene at the New York-inspired fit-out of Nieuw Amsterdam. Book a table for lunch, dinner or late to revisit some of your own hangovers, heartaches or good intentions for future quests of sobriety. In a cocktail bar.

Rosa’s Kitchen
If you’re after something a little darker and deeper, see Pasolini, a multi-faceted look at the master filmmaker, poet, iconoclast, Pier Paolo Pasolini. While the film might make you question your destiny, Rosa’s Kitchen on Exhibition Street provides a cosy, comforting way to digest the film. Settle in for an authentic linguine and pinot, and let the relaxing atmosphere take the conversation in all directions.

Mr Big Stuff
Mr Big Stuff is all about getting a group together to indulge and share in food inspired by America’s Deep South. This place brings soul to the city, with trays of Kool-Aid and funky tunes to match, so why not get on board the cliché train for the evening and call in here before seeing Me and Earl and the Dying Girl. The film is an award-winning, hilarious tear-jerker that deals with coming-of-age life crises. Get the pals together for this one and get caught up in the moment. Sometimes that’s what life is about – good food and good times, with good people. 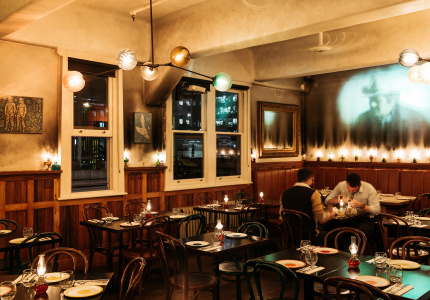