Never order chocolate powder and milk in a cafe again. These guys are way ahead. 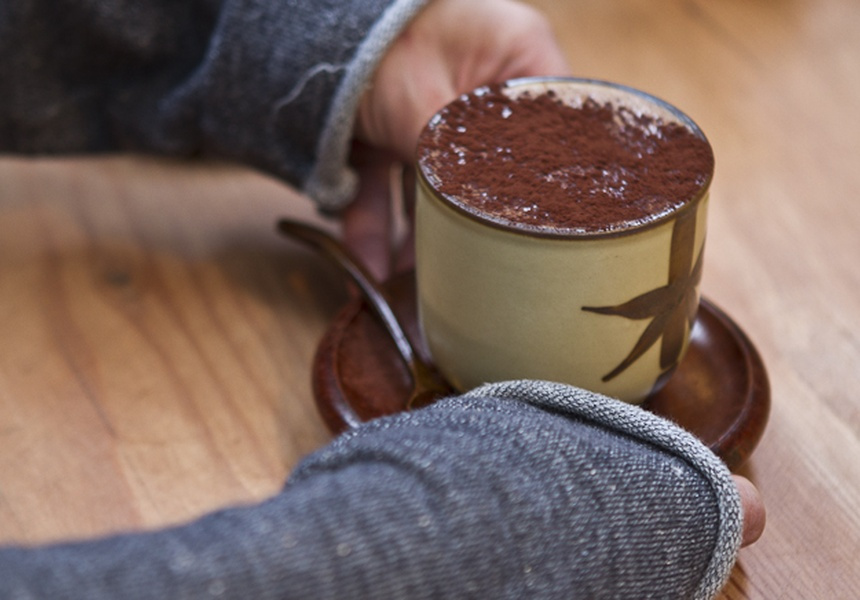 Melbourne winter has inspired in us a rediscovery of hot chocolate, which has in turn led us to some pretty inventive hot chocolates around town.

Just a few things setting the hot chocolates below apart are peanut butter, chilli and melted cheese. We’ve also seen some serious tools pulled out (including a blowtorch).

You may never go back to Milo again.

This DIY hot chocolate requires two hands. Served in a little ceramic bowl, piping-hot milk from a little jug is pored over a scoop of thick ganache (made in-house using 70 per cent single-origin cocoa). “We wanted to make it a proper drink, using real chocolate and not just a mixture of sugar and cream,” says co-owner Jean Thamthanakorn. “We like the idea of the customer becoming involved.”

Monsieur Truffe has been a classic hot chocolate go-to for years, and for good reason. Brian Edwards is chef at the Brunswick chocolatier, which specialises in a variety of single-origin chocolate from PNG to Venezuela.

“I don’t really go for novelty, I just go for simple stuff that’s the best quality,” he says.

But that doesn’t mean the hot chocolates here don’t get a little adventurous. The Jaffa hot chocolate, for example, was a weekly-special-turned-permanent-fixture that involves a shot of triple sec and a candied orange peel to garnish. That’s just enough booze and a (natural) sugar hit to cure wall-hitting. There’s also a Mayan chilli option, which involves a complex mixture of secret spices. All are served in a terracotta mug with a wooden paddle.

You know it’s authentic when you can order a side of cheese with your hot chocolate. In fact it’s slightly rude to order it without queso; a soft, creamy, white cheese, which will slowly soften, but won’t fully melt as you pour the steaming hot chocolate over it.

“Without the cheese, it’s not Colombian,” says Sonido owner Santiago Villamizar. A hot chocolate is a morning ritual for many Colombians, but this one works anytime of the day. For the traditional Colombian drink, Villamizar imports Corona drinking chocolate, which is mixed into the almost boiling milk (80 degrees) and served in an aluminium saucepan in the shape of a small jug (an olleta). To make it extra frothy, use the wooden whisk provided (molinillo) and don’t forget to order an alfajor (biscuit), because once again, it would be rude not to.

In what can only be described as the ultimate tip of the (Yankee) hat to New York, the guys behind Bowery to Williamsburg have created a peanut-butter hot chocolate. Step 1: The peanut-butter caramel syrup is squeezed in. Step 2: A scoop of peanut-butter ganache is added. Step 3: The Mofo Deluxe hot-chocolate mix is combined with milk and heated. If you think it’s going to be too much of a PB explosion, it’s not. The result is a miraculously subtle, nutty taste. “We’ve infused the peanut butter with caramel to tone down the fat. The chocolate tones down the sweetness because it’s such high quality,” says head chef Jesse Keane. Served with a mini Reese’s PB Cup, Step 4 is to drink up.

At Mörk Chocolate Brew House, the drinking chocolate ranges from a milky 50 per cent blend to a shot of 100 per cent cacao (served like an espresso). For all of the signature hot chocolates, it uses 70 per cent. “We’ve found that is the perfect balance between sweetness and the density of chocolate,” says co-owner Josefin Zernell.

The experimental blends include the Hazelnut Caramel Chocolate Bar (basically an energy bar in liquid form) a Breakfast Chocolate that includes house-made oat milk (prepared in the chocolate lab out back) or the Campfire, which involves a torch blower, some swirling smoke, a charred marshmallow and 70 per cent drinking chocolate which tastes like your childhood camping memories. “They are all just really interactive ways of making and drinking a hot chocolate,” says Zernell.

Not using plain-old cow’s milk, co-owner Jesse Aston is really putting the almond into the milk, creating his own “house squeez’d’ almond ‘Malk’” that’s naturally sweetened and infused with dates and a pinch of sea salt (also distributed to a handful of cafes in Melbourne).. The LBSS hot chocolate is “made entirely out of health”, according to the product description, using drinking chocolate sourced from Kew’s artisanal chocolate cafe Xocolatl.

“We default to almond milk not just because it's dairy free, but because chocolate and nuts are basically best friends!” says Aston. “You really can't trust someone who doesn't enjoy scorched almonds.” The drink might be perceived as lite, but it still delivers that natural sugar high. Served in a ceramic mug, it’s the chocolate cleanse we’ve all been searching for. 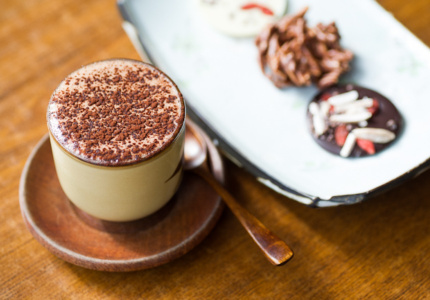