This article first appeared on Broadsheet on March 31, 2020. It has since been fact-checked to confirm all hot cross buns are available in 2021, and made with the same recipes. All prices and details have also been updated.

Density of fruit. Intensity of spice. Butter-to-bun ratio. These are all critical (though highly subjective) factors when it comes to the tasting of a hot cross bun.

To ease the pre-Easter burden of deciding which bun is best for you, Broadsheet gathered some of the city’s best chefs for a blind tasting. We tried 10 buns from around Melbourne, running the gamut from supermarket to specialist, to determine the city’s best and answer all your burning bun questions.

Which one reigned supreme? And is a hot cross bun without fruit even a hot cross bun at all? Here’s everything you knead to know about the buns on offer this season. Bun intended.

“I really like hot cross buns that bake together, so you know when they prove and bake the sides touch each other, and then you get that little bit where they’ve kissed,” Reid says. “That’s actually my favourite bit.”

An abundance of any one spice would mean lost points in Burnett’s eyes. Especially cinnamon. “I hate it when there’s too much cinnamon,” she says, laughing.

The winning bun and two runners-up are listed in order below (remaining buns are in no particular order). Reid: “This is great – nice and chewy – and I love the big chunks of candied peel. It also has really good fruit distribution. It’s not all just sitting at the bottom, because [that’s] what can happen if your dough is not the right consistency. I’d be pretty happy to eat this untoasted as well.”

Burnett: “Well presented with lots of fruit and peel and a good, even distribution. Good toasted or fresh.” Stanton: “Ooh, I like this one. It’s got a good little crust on the outside. It’s definitely less fruity but agree it’s a good glaze. This would be great toasted. And it’s actually good even before putting butter on it.”

Burnett: “It’s got great citrus and it’s soft and springy.”

Mai: “This is nice. Really fluffy and not dense at all, but I do I think the spice might be a bit too gentle.” Reid: “See, these ones have been kissing! And it’s dense, but it’s like a nice density. I definitely think it’s a bit more savoury. And if I didn’t have an oven [for toasting], I’d still be happy.”

Fraser: “This is a bit more fun in the spice department. It’s almost a bit Christmassy.”

Stanton: “It’s actually quite bitter and a bit savoury. This one would be good to have fresh.”

Allen: “There are citrus and ginger notes ... sort of Christmas-fruit vibes, and I like the flour they’ve used. It’s also a good amount of sweetness.”

Price: six for $18.20
How to get it: pick up from Dench Bakers (109 Scotchmer Street, Fitzroy North) or order as part of a “bread box” for home delivery Tuesday to Saturday.

The Soft, Chocolatey Bun for People Who Prefer Cakes Stanton: “I’m still not a fan of chocolate hot cross buns in general, but this one has a really nice, soft texture. But it should have fruit to be called a hot cross bun. Can we make that a rule?”

Reid: “This is good chocolate quality and it’s delicious, but it’s not a classic hot cross bun. It’s got a slightly cakey texture to it because of the chocolate, but it doesn’t have that pull apart, gluten-y chewiness to it.”

Allen: “I disagree, I disagree.”

Mai: “It could do with a little citrus in it. Maybe just a bit of orange to give it that Jaffa vibe.”

The Bun for the Dried-Fruit-Averse Reid: “These ones haven’t kissed on the sides but [they have] a nice level of spice. It’s not overpowering but it’s there.”

Allen: “Yeah, independently baked. I think it has a good amount of citrus. I would say it’s lacking fruit though – the fruit ratio is off.”

Fraser: “If you’re dried-fruit averse, this could be the bun for you.”

The bun: Phillippa’s Organic Vine-Fruit and Candied Peel Hot Cross Bun
Price: $4 each or $19 for six
How to get it: pick up from Armadale, Brighton or Richmond or pre-order online.

The Bun for Jaffa Fans Reid: “It looks a little bit mean on the inside, like where’s all the chocolate? But there is some citrus, so it almost has a bit of a Jaffa vibe.”

The bun: Dench Bakers’ Chocolate and Orange Sourdough Hot Cross Bun
Price: six for $16
How to get it: pick up from Dench Bakers (109 Scotchmer Street, Fitzroy North) or order as part of a “bread box” for home delivery Tuesday to Saturday. 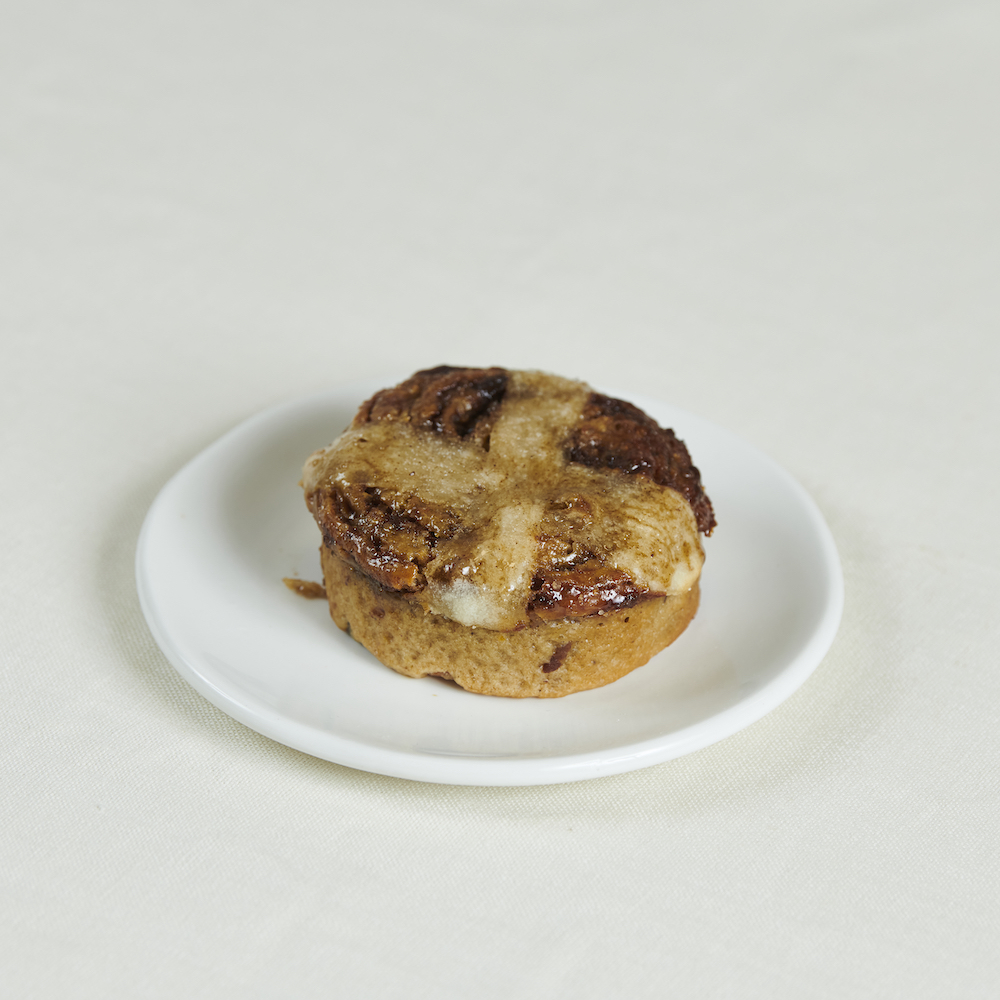 Burnett: “It looks scroll-esque, like a vegemite and cheese scroll – but it’s very sweet.”

Mai: “I’m confused. It’s definitely a scroll. Look at it!”

Reid: “It has a bit of a rugelach vibe to it. Like that Eastern European sweet. Is it appropriate to put butter on it?”

The bun: Mörk Chocolate’s Mork X Bun
Price: $5.50 each or six for $32
How to get it: pick up at Mork Chocolate Brew House (150 Errol Street, North Melbourne) or pre-order online. 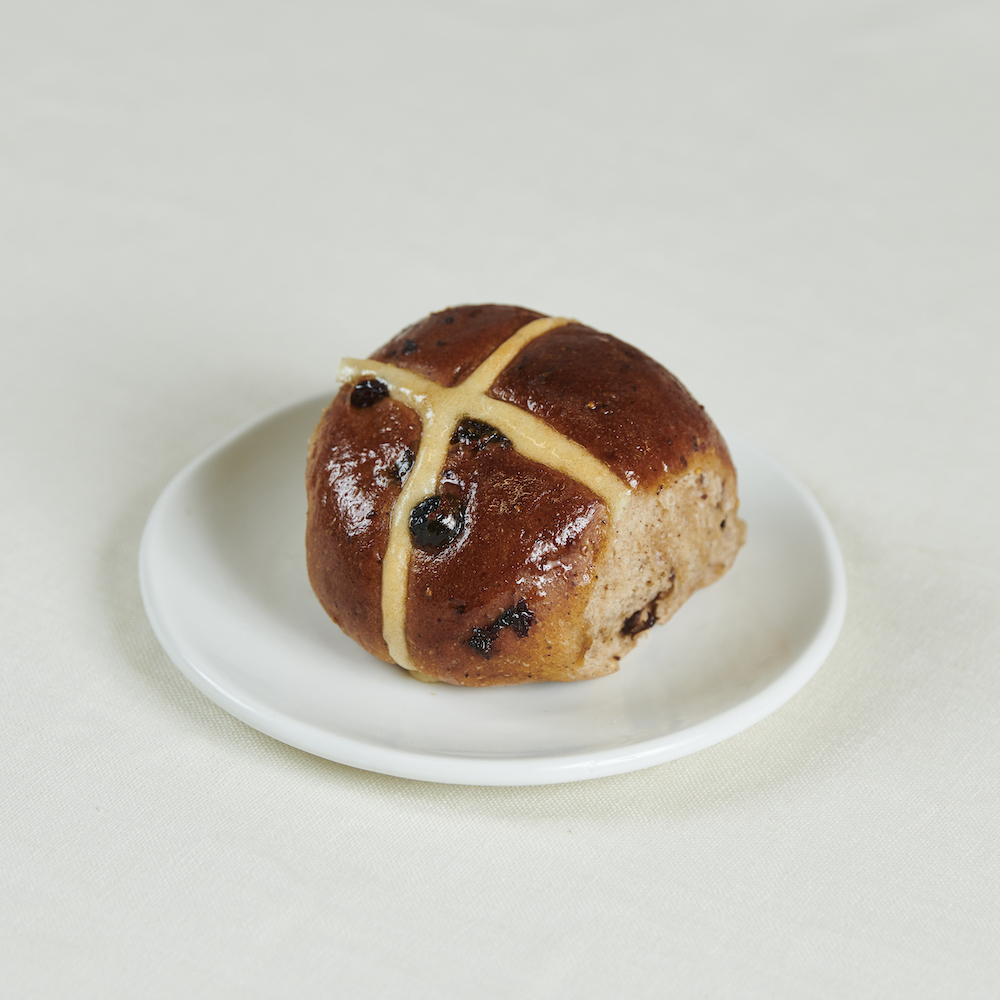 Allen: “Good spice and good texture, but maybe a little too sweet. I don’t think I could eat a full one.”

Reid: “This one has a good fruit density and it’s chewy and moist, but it’s a bit of a gnarly looking bun.”

Burnett: “The cross looks aggressive on this one.”

Stanton: “Bit of love put into the glaze though.”

The Bun for Spiced-Fruit Lovers Mai: “Quite a bit of spice in this one, but is there too much fruit?”

Fraser: “Is there such thing as too much fruit?”

Stanton: “It’s got some cherry or cranberry in the fruit mix. This would be good for bread and butter pudding. It’s got really good flavour.” Stanton: “Look at the volume on that bad boy.”

Mai: “I think I ate one of these this morning. My wife loves the supermarket hot cross buns. It’s fluffy.”

Reid: “You could play the drums on the top of this.”

The bun: Woolworths’s Traditional Fruit Hot Cross Bun
Price: $3.50 for pack of six
How to get it: pick up from any Woolworths supermarket in Australia. 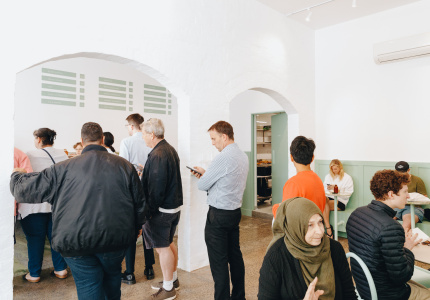