A shockingly simple French dish of egg and mayo by ex-Agrarian Kitchen head chef Ali Currey-Voumard. Choose your dining companions carefully – you’ll want to fight for your right to wipe the plate clean. 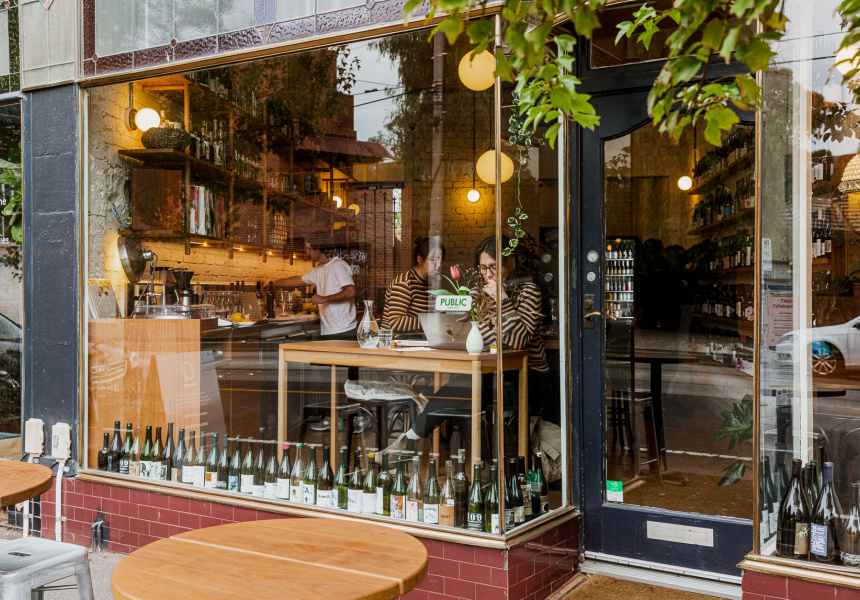 With oeuf mayonnaise, the devil is in the detail.

The classic, shockingly simple French dish of almost-hard-boiled eggs and mayo is taken very seriously in its homeland; The New York Times Magazine recently published a piece on it titled, “The Egg Dish So Good They Have a Society in France To ‘Safeguard’ It”.

In Melbourne, it’s decidedly less of a big deal. But the version at Public Wine Shop – a newish, small-but-mighty bar on St Georges Road in Fitzroy North – is a show-stealing feat of simplicity that stays more or less true to its roots.

Behind it is Ali Currey-Voumard, one of the country’s most exciting young chefs, who made a nationally noticed splash as head chef of Tasmania’s acclaimed Agrarian Kitchen Eatery, a sustainability-focused cooking school and restaurant in New Norfolk.

Her prowess is eclipsed only by her modesty. It’s head down, orders up for Currey-Voumard when Broadsheet visits on a Tuesday night. It’s a full house, and she works methodically – and single-handedly – hunched over a double-plated induction cooktop in the bar’s back corner. It’s an unpretentious open kitchen that belies the restrained refinement in her mostly French-leaning menu (she did a stint in France under chef Harry Lester at Le Saint Eutrope).

This refinement is perhaps clearest in her silky-smooth, perfectly balanced, “ooft”-worthy oeuf mayonnaise. “It’s basic flavours,” she says. “But it’s about really nailing those basics.”

She says she tells diners who are unacquainted with the French bistro staple, plainly, that, “It’s just eggs in mayonnaise … And once you say that people don’t tend to need to know much more. They just get excited by the egg.”

To make it, she boils Chooks at the Rooke eggs (from Cororooke in western Victoria) for five-and-a-half minutes. Then comes the mayonnaise, which she says takes a lot of tasting and adjusting to get the ratio of salt and vinegar bang-on. “You’re just dealing with an egg, which is obviously yummy, but can be bland if not flavoured right.” The egg is then halved and doused in enough mayo to make it disappear on the plate.

At a glance, it could be burrata. But a still-jammy yolk lies beneath. It’s finished with a glug of oil, a criss-cross of Cuca anchovy fillets (an “extra treat”), a herb of some sort (Currey-Voumard prefers celery leaf) and a hunk of sliced-down-the-middle baguette, which you’ll need to wipe the plate clean of any and all signs of eggy excellence.

While oeuf mayonnaise isn’t impossible to make – or even master – at home, “It is a big effort,” Currey-Voumard says. “But I will say it’s pleasurable, for me, to do it well.”

So, put down your stick mixer and leave it to the professional.

“This Melbourne Dish” is a new series about dishes that have caught the eye of Broadsheet’s editors – or that the city has become instantly infatuated with.