Orlando Marzo is off to Berlin for the international finals of Diageo World Class. Head bartender Orlando Marzo of South Melbourne’s experimental fine diner Lûmé, has won the Australian finals of the Diageo World Class, widely considered the world’s premiere cocktail bartending competition. This was his second year in the competition (he was the runner-up in the 2017 Australian finals).

The Italian-born Marzo worked at prestigious European bars – including Milk & Honey in London – before he moved to Australia in 2013.

“The Australian bartending culture might be a bit more contemporary than big cities like London,” says Marzo. The community is more connected to each other. They’re very keen to see what’s next, that’s why Australian food and drink is moving so fast.”

The Australian finalists were asked to compete in four challenges that include drink creation, speed and an on-camera test. For the 10 Year Challenge, entrants were asked to present their vision for the future of cocktails.

Marzo’s winning drink in the category included Tanqueray No. 10 gin, chenin blanc soda, mountain pepper and Salad Burnett, a herb with a flavour that comes close to watermelon. The drink is finished with distilled Campari. The distillation process uses a rotary evaporator (a tool usually reserved for the science lab) to remove the colour from the red Italian aperitivo for a touch of bitterness.

For the Think Global, Go Local challenge Marzo went to the Yarra Valley for inspiration. There he found second-grade apples that are normally rejected by supermarkets and attempted to minimise waste by using apple skin and discarded pulp in his drink.

But he also wanted to think about the carbon footprint of his drink. So rather than use out-of-season limes, Marzo opted for cumquats to add a sour element to his drink.

“If you make cocktails with lime juice when there are no limes, even if you use the skin, it’s not really helpful. I wanted to extend that idea further,” says Marzo.

Marzo will now head to Berlin for the world finals where he will compete against winners from more than 60 countries. But despite the pressure that comes with representing his country, Marzo is taking the expectations in his stride.

“It gets me a little bit emotional just thinking about it,” he says. “I’m never scared, just excited. I’m just out of my skin, I can’t wait to be there.” 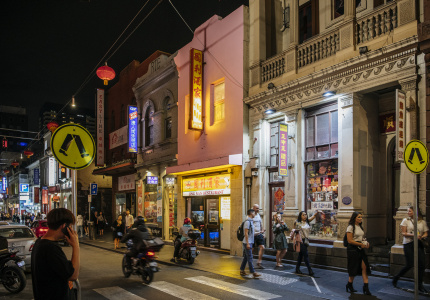