Produced by Broadsheet in partnership
with QT.

Meet the New Baos In Town

Hot Sauce Laneway Bar fills its new baos with ingredients from American diners. In partnership with QT Melbourne, we find out why and get some tips for making your own. The Steam & Stuff Me Chicken Bao with The Enenra cocktail. 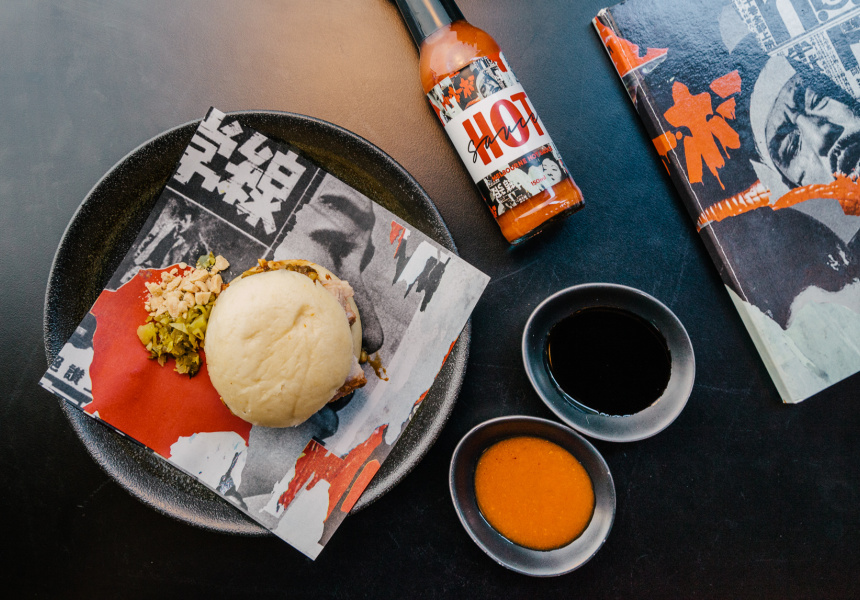 Melbourne has long embraced baos of all shapes and sizes. We’ve sucked up xiaolongbao in Chinatown, stuffed ourselves with char siu bao at yum cha and sought-out delicate sweet baos filled with custard or red bean.

“Baos are a global phenomenon,” says Paul Easson, executive chef of QT Melbourne and its Japanese-Korean bar Hot Sauce. He would know. In preparation for their menu at the newly opened hotel on Russell Street in the CBD, Easson and QT Melbourne Creative Food Director Rob Marchetti visited New York, Taiwan and Hong Kong to sample the best street foods and snacks, including a stop at Hong Kong’s famed Little Bao.“That visit really put me onto the idea to mesh Western and Asian flavours in the bao,” says Easson. “I remember their ‘Sloppy Chan’, filled with braised tempeh, truffle mayonnaise, sweet pickled daikon and fried shallots – the inclusion of truffle mayo was genius.”

In keeping with the theme, Hot Sauce’s condiments have an American diner edge. The fried chicken bao is paired with American yellow cheese and kimchi, while the beef bao has fried cayenne onions and pickled daikon. As for the pickled Chinese bitter melon on the barbeque tofu bao, Easson says it has a sweet “candied” flavour, rather than the vegetable’s traditional bitterness.

Easson says the key to a good bao is the balance of textures and flavours. “You need crunch, some heat and a little bit of sweetness,” he says. “Our baos are made with a bit of pork fat, so they’re slightly sweeter and much richer than regular steamed baos.”

If you base your drink around your choice of bao, Easson recommends you pair the pork with The Stingy Priest cocktail featuring vodka, shochu, apple cider shrub, cinnamon-sugar and rhubarb. If you go for the chicken bao, he suggests The Enenra cocktail featuring mezcal, sake and spiced maple syrup.

For those thinking about making baos at home, Easson has some tips. Arm yourself with rice flour, a rising agent (such as baking powder), pork fat, and a good steamer. If you don’t have much time, bao wrappers are available to buy at most Asian groceries. “All you have to do is steam, fill and serve,” says Easson.

Just make sure you don’t go overboard on the amount of filling. It can get messy.

Easson’s top kitchen cupboard fillings for DIY baos
Mix and match from the below ingredients. Each bao requires an element of crunch, heat and sweetness, in addition to your main protein.

This article is produced in partnership with QT Melbourne.

Produced by Broadsheet in partnership
with QT.
Learn more about partner content on Broadsheet.