Meet and Eat: Cooking Together

Cooking together is the new black for Melbourne foodies. They might not be bona fide cooking clubs, but these groups are whipping up one hell of a tasty storm. 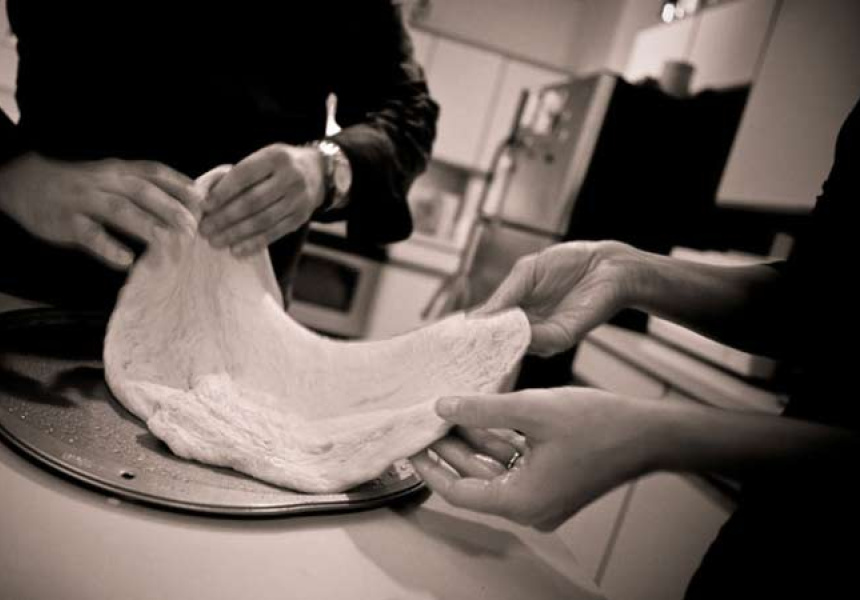 The first time I took part in a group cooking dinner I was very nervous. It was in a converted warehouse, there were 18 of us (all with varying cooking skills) and I knew one other person: the host. But we had a common interest: cooking.

Now you might think that 18 avid food lovers – all strangers – getting together to cook dinner would be a recipe for disaster, particularly in the competitive food age that we live in where, following the likes of Masterchef, everyone is a foodie. But it wasn’t.

Thanks partly to food-centric media and a renewed focus on how our food comes to us, there’s a new kind of dinner party on the rise, and it’s bring-your-apron, not bring-a-plate. Let’s call it a cook-in for want of a better expression, and to all intents it’s a cooking club, but with less defined boundaries.

For Hugh of Richmond and his rotating group of enthusiastic foodie friends the experience is one of complete participation.

“The friends that I have evolved the cooking dinners with turn up enthusiastically and get involved,” says the food and wine devotee, adding that it’s a self-weeding process. Non-participants simply tend to opt out of future dinners, which Hugh estimates happens about once a fortnight in his open-plan kitchen. “It grows organically, but it works because I have the space to accommodate a big group cooking together, and that’s not something everyone has access to.”

But it’s about so much more than space. Hugh draws on the varying cultural backgrounds and experiences of his cooking circle to share the techniques and skills of particular cuisines. Guests can either contribute or learn at each dinner and where knowledge is lacking the group experiments together. Themes have included Mexican, Spanish, Japanese, Italian and Malaysian.

It’s a similar idea for food blogger and New Media enthusiast Jess Ho, with her first cook-in growing out of a twitter conversation into a full-blown dumpling-making workshop in her kitchen.

“We were all on twitter and someone brought up dumplings. We were debating who makes better dumplings, then someone said ‘We should get together and make some.’ Suddenly there were more people wanting to come. So in the end I asked everyone to DM (direct message) me, and I organised it.” In this food-focused context it was as simple as a suggestion.

“We called it a dumpling party and it was held at my house,” Ho says, adding that the thought of having a bunch of (then) mostly strangers into her home to cook didn’t worry her because of the common interest of the group.

Since then, gatherings have included more dumplings, ramen and a Momofuku cookbook dinner, with future plans for a Bourke Street Bakery cook-in and an offal dinner, with everyone sharing their expertise, knowledge and cultural heritage with the group.

But beyond access to a great space and skill sharing there’s another dimension to cooking together that these groups find equally important. It’s a chance to bond with like-minded people. For the girls of the food blog Trotski & Ash, their love of food transformed them from home cooks to food bloggers, cooking-club organisers and more recently caterers.

“The intimacy of the kitchen, and the kitchen table is an old notion,” says Sarah Trotter when asked why she thinks more people are cooking together and what she loves about cooking with blog partner Romy Ash. “[We enjoy] learning from one another, but also it’s simply nice to spend time together in the kitchen, chatting, telling stories and then sharing a meal. To simply sit down at a table together when we live such frantic, busy, lives is enjoyable.”

And certainly the friendships that develop around the act of cooking together seem to last.

“We've had quite a number of people form friendships through our events, although no romances that I know of,” jokes Sarah Robins, project manager of the Victorian Cook Here and Now events hosted by Slow Food Melbourne, which encourage people to come together at farmers’ markets to cook local produce.

“The purpose of CHN has been to introduce people to good, clean, fair food, [to] share their skills and stories and enjoy eating it in a convivial atmosphere – as per the Slow Food philosophy,” she says, noting the swell in interest since the events stared in April this year. That swell in numbers includes repeat participants.

Back at the warehouse, several hours later, dinner was on the table and the 18 of us toasted our success like we’d known each other for years. The sense of group pride in the meal was palpable. Everyone had contributed to at least one dish and we’d swapped phone numbers. The results were spectacular.

The only drawback? With a group cook-in that big, there were never going to be leftovers.