McConnell and Murphy's Moon Under Water

Moon Under Water, the revamped dining room at the Builders Arms, is set to woo diners with its well-priced set menu. 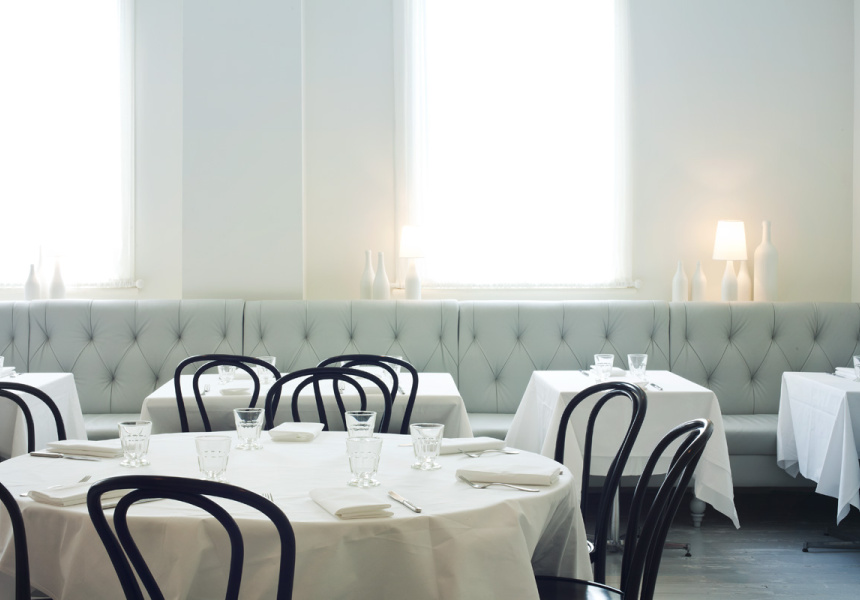 Only a few months after reopening under the stewardship of new owners Andrew McConnell, Anthony Hammond and Josh Murphy, the Builders Arms in Fitzroy has been drawing diners in droves. Its more formal dining room, Moon Under Water, opens today.

The George Orwell essay from which the restaurant takes its name describes the ultimate public house; a place frequented by regulars, with an atmosphere that is convivial, bar food that is perfectly paired with good beer and attention to detail that is particular without being pedantic. Hospitality veteran Hammond and chefs McConnell and Murphy have already hit the mark with the bistro and bar at the Builders, and are primed to do it again with the dining room.

Designed by Projects of Imagination (Golden Fields, Chin Chin, Trunk), Moon Under Water is white on white, without feeling stark, and features an impressive wine cabinet lining the back wall. The room seats 50 and is described by McConnell as a “little oasis”, which will have an emphasis on dining that is fun and delicious. “We don’t want a little temple. It’s about dinner, it’s about not having to think about 50 [menu] choices, it’s about enjoying food with your guests,” he says.

McConnell is true to his word. There’s no a la carte, only a $75 set menu available from Wednesdays to Sunday nights from 6pm and for Sunday lunch. “One of the reasons we’ve decided not to offer an a la carte menu is to give us a chance to really refine what we’re doing,” says McConnell. “It will also give us a chance to respond to the seasons, the suppliers we work with and to hone our craft and our cooking.” In a departure from McConnell’s restaurants of late, Moon Under Water will also be taking bookings.

Murphy has been working with McConnell for the past nine years, most recently at Cumulus Inc., where he won The Age Good Food Guide’s Young Chef of the Year last year. The two chefs aim to create a menu that will change weekly and showcase the best produce they can source. “It’s a set menu, but it’s not a degustation,” says Murphy. “Each course will be a complete dish – it will be a well-balanced meal.”

McConnell elaborates: “We want to keep the food refined but quite pared back,” he says. “Obviously we’ll use technique, but simplify it to the point where the product really sings.”

Hours
Wed to Sun from 6pm
Sun from noon