Whether you know him as the godfather of modern cooking or the bad boy of the British restaurant scene, the retired chef is undeniably one of the world’s best. Here’s where White dines when he’s in town, from a classic Italian enoteca to a stunning rooftop spot. 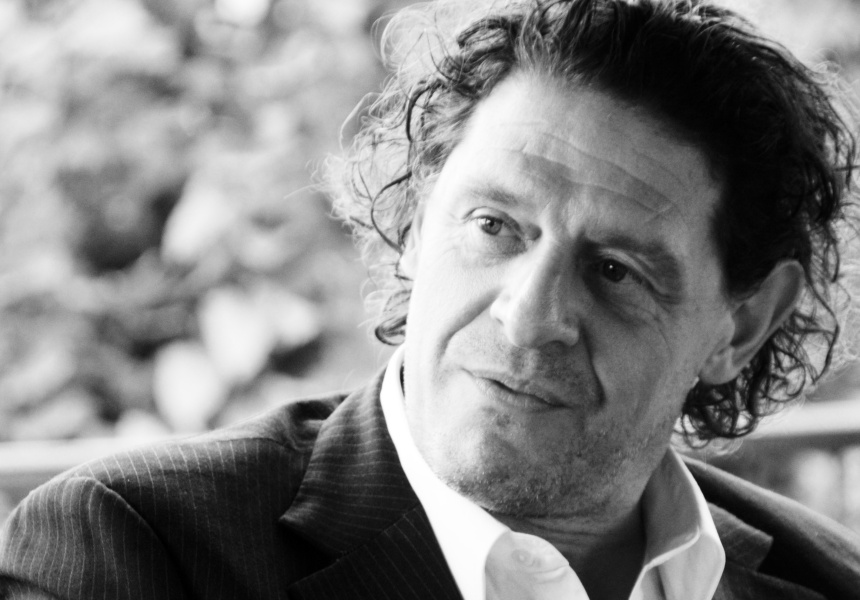 World-renowned celebrity chef-restaurateur Marco Pierre White gained notoriety in the ’90s for his bad-boy good looks and controversial outbursts in the kitchen (he once made Gordon Ramsay cry). He was the youngest chef to have their restaurants awarded three Michelin stars – Harvey’s in London (two stars in two years, 1987 and 1988) and then The Restaurant Marco Pierre White at the Hyde Park Hotel, also in London (the third star in 1994). Though he renounced all his awards when he retired dramatically in 1999. He’s also responsible for training celebrated chefs including Gordon Ramsay, Curtis Stone, Mario Batali and Shannon Bennett.

Now, White’s in Melbourne to host a handful of intimate events for Good Food Month. As we chat, the man dubbed enfant terrible (French for “terrible child”) is anything but, emitting the utmost politeness and courtesy as he takes me through his favourite eateries. He has a strong connection to Melbourne’s food scene, centred around fond memories from his past.

“It’s like going back to Yorkshire,” White says. “It’s very honest, very kind, very generous and polite, and it’s straightforward. But above all, the food here is extraordinarily good. It is all very affordable within an environment you want to be in.”

Here’s where he heads when he’s in town.

Caffé e Cucina
This Chapel Street stalwart has been recreating the atmosphere of Italy’s popular cafe scene since 1988, serving traditional plates of rigatoni al ragu and veal milanese every day of the week in a tiny but bustling space. White heads here for a bowl of pasta and a glass of chianti.

“For me, it’s all about memories. We create memories. I can’t help being a romantic idealist,” White says. “It truly reminds me of my childhood. It’s like stepping back in time. My mother, who was Italian, would take me to lunch at one of her friend’s Italian restaurants and I would just sit there, spoilt.”

If he’s visiting during the day White will sit outside and have a coffee instead.

“The one thing Melbourne does that is without question the best in the world is coffee,” he says. “That’ll take me back to a small cafe I’d go to as a child in Yorkshire with my mother. She’d have her cappuccino, and I’d have a baby mocha.”

Flower Drum
Since opening in 1975, Flower Drum has established itself as a Cantonese fine-dining institution loved by locals and visitors alike. It combines a quiet, elegant ambiance with extraordinary food and top-notch service.

“That place is iconic,” White says. “I’ll always have the Peking duck with the pancake in plum sauce. Delicious. The lobster with spring onion, ginger and noodles is equally good. Without a doubt I’ll finish with the toffee banana fritters.”

“I go to Lau’s specifically for the pork; that pork is delicious,” White says. He’s talking about the pork loin, which walks the line between rich and sweet thanks to a mix of dark vinegar and a little sugar.

Dishes are simple but refined – soft potato gnocchi with duck and porcini ragu, Moreton Bay bug spaghetti, and squid-ink tagliolini with bottarga – in a room that channels an old-school enoteca, with white marble bench tops and geometric patterns on the concrete floor.

“I’ve dined at a lot of places in Melbourne and Tipo 00 has some of the best food; it’s amazing quality, whatever you order,” White says. But he’s a creature of habit, returning to the risotto almost every time. “The rice is always cooked to perfection.”

Siglo
With its Parisian wicker chairs, on-point table service and substantial cocktail list, this charming European rooftop bar is one of White’s go-tos.

“I love visiting Siglo for a late-night drink whilst gazing at the stars and at St Patrick's Cathedral. One night, I remember seeing an amazing shooting star,” White says. “Bang, there it was right in front of me. I made a wish but I’m not sure it came true.”

The terrace is fully heated for frosty winter nights, and you can indulge in a Cuban cigar from the humidor, if that’s your style.