Have some bike safety with your morning coffee. Whether you fall into the category of cyclist, driver or pedestrian, it’s hard to travel the streets of Melbourne without noticing the occasionally tempestuous exchange between the three. And while this is clearly a serious issue, Bikefest and local cartoonist Oslo Davis are having a little fun with notions of bike safety and road harmony.

The Move Mindfully campaign, a partnership between the City of Melbourne and Bikefest, isn’t so much about preaching road safety, but highlighting how all road users can make our streets a little more harmonious.

Davis – a cyclist, driver and pedestrian – has created a series of drawings centred on this message of road harmony, which have then been printed on takeaway coffee cups distributed at cafes around town. Davis’s drawings take inspiration from his wanderings around the city. “It was important to make the drawings authentically Melbourne,” he says, “even though not every drawing had Flinders Street station in the background.”

The illustrations focus on aspects like pedestrian awareness, shared paths, checking mirrors and acknowledging other road users. Davis sees it as an alternative to the often preachy road safety campaigns. “Hopefully it makes people realise that there are different ways to view a situation. It’s a small, humorous piece in a larger puzzle on road harmony, so maybe it lightens things up a bit and gets people to think about the more positive side of sharing the road.”

Participating cafes include 1000 £ Bend, Mr Tulk, Ponyfish Island and The Little Mule among several others, all of which are using the Move Mindfully cups for their takeaway coffees. Who says road safety can’t be a little bit fun? 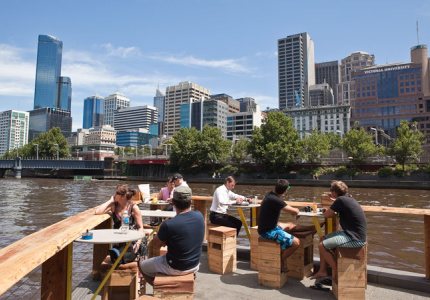