It sells out at farmers markets in a matter of hours, but now Holy Crumpets has its first bricks-and-mortar shop in the CBD. 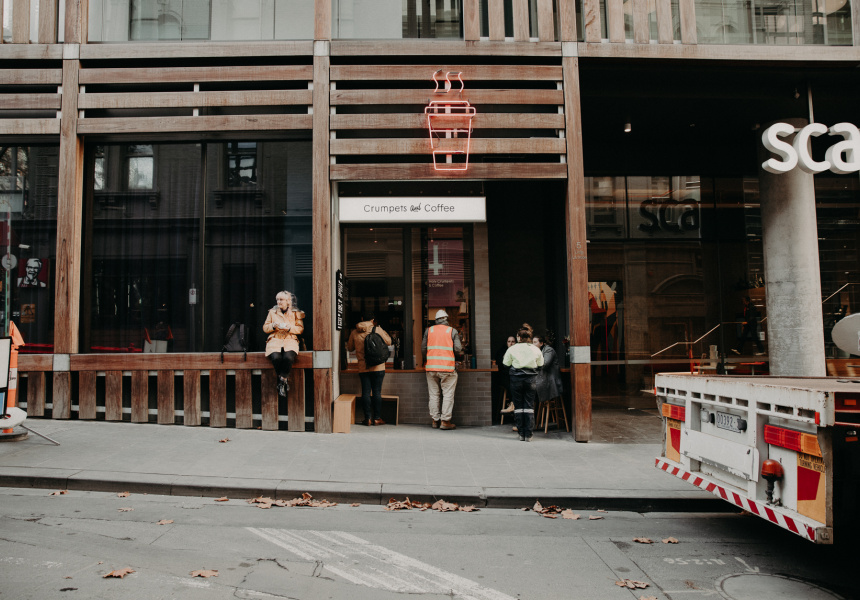 “Knowing the hands that feed you is something that’s always been important to me,” says owner Josh Clements. He grew up in Gippsland with seven siblings, and his mum often baked up to five loaves of bread for the family each day. Most of their fruit and vegetables were homegrown too.

The hands-on Clements family approach holds true at Holy Crumpets. The base crumpet recipe and method took six months to master and is made using whole-wheat and freshly-milled stoneground flour. It’s a 24-hour process to prepare the dough.

“We play the slow game. Cutting corners just doesn’t interest me,” says Clements. “That took a long time … to really have something I believed in. But I don’t shy away when it comes to experimenting.”

In one crumpet, carrot juice substitutes for water in the original recipe. It comes with cream cheese and candied walnuts, and joins other bountiful, regularly rotating specials, like the chocolate crumpet with toasted marshmallow and biscuit crumb. For a savoury option, try one with grilled taleggio – it’s theatrically flamed in front of you and finished with caramelised onions, a sprinkle of thyme and a drizzle of honey.

As well as adventurous toppings there’s a niche exploration of locally made honey. There are six varieties to choose from, mostly sourced from renowned Melbourne beekeeper Robert Redpath’s Lygon Street shop, Bee Sustainable.

Most varieties of honey at Holy Crumpets are Victorian, with the occasional interstate selection. Even within one state, the honey can differ greatly in flavour, colour and viscosity, explains Clements.

Take the evocatively named bloodwood honey, for example. “It’s from north-east Gippsland and the sap looks like blood, like really looks like blood, it’s crazy,” says Clements. “It’s got a bold caramel flavour, thick with a sticky mouthfeel and it’s rather light and fragrant.”

Other accompanying spreads include jams, peanut butters and chocolate hazelnut, all of which are available to purchase by the jar. You can also grab a half-dozen box of un-toasted crumpets to take home too (just order ahead as stock is limited).

The journey – or pilgrimage, if you will – to opening Holy Crumpets began in 2013 when Clements was travelling in the USA. Longstanding family-run Seattle restaurant The Crumpet Shop caught his eye, and the seed of an idea – to one day open his own shop – began to germinate.

Clements began experimenting with his housemate’s discarded sourdough starter, before publicly debuting his crumpets at the Coburg Market in September 2017. They sold out within 45 minutes. Admittedly there was a low supply that day, but even after increasing production the trend continued.

“People were buying 30 at a time to take home and freeze,” says Clements. “Knowing we’re becoming part of people’s ritual and something they’re attaching memories to … that’s everything to me.”

The CBD shop is tiny – about 6 metres squared – and Clements considers it more of a product testing ground than a full cafe offering. A 10-litre honey drum sits next to two staff members who work snuggly side-by-side, grilling and topping the crumpets and making Wood & Co coffee. Outside, two low benches comfortably seat three people each, and another four customers can pull up a stool at the L-shaped bar.

Due to the limited space in the CBD shop, all the crumpets are cooked the night before at the Holy Crumpets wholesale kitchen in North Carlton. That space (at 645 Nicholson Street) is much bigger and is scheduled to open to the public in the coming months with an eat-in option. Customers will get to see the crumpet-making process in the kitchen and up to 30 honey drums lining the walls.

This article first appeared on Broadsheet on May 30, 2019. Menu items may have changed since publication.