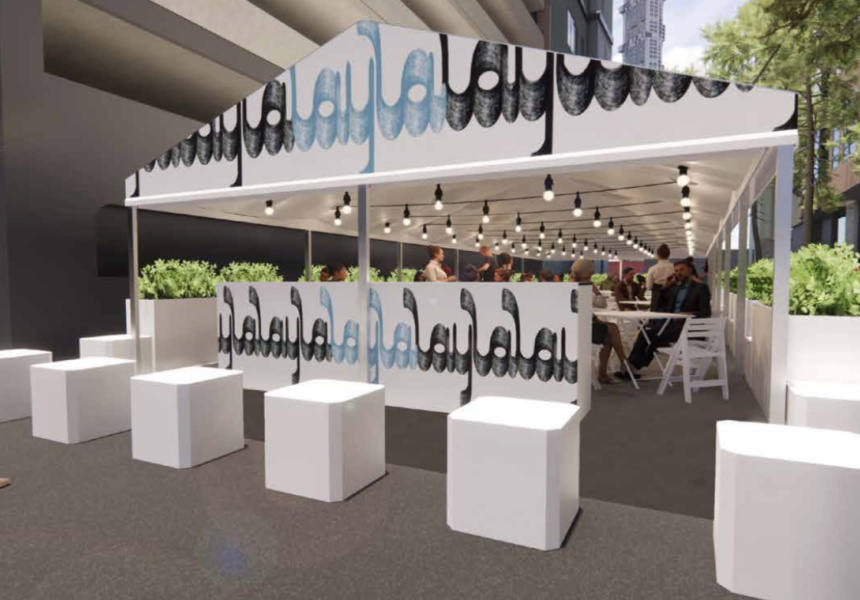 Working with the City of Melbourne, the Maha owner (and founder of Providoor) is cordoning off Bond Street – outside his CBD restaurant – and installing a huge 20-by-10-metre marquee, which he says will be similar to The Birdcage at Flemington Racecourse.

Underneath, he’s setting up an airy, greenery-filled, laid-back Middle Eastern bar and restaurant, which will open next Wednesday and stick around until late March. With new outdoor-dining rules slated for Monday, it will accommodate 70 to start, with room for up to 100 as restrictions ease further.

The five-month activation is inspired by summers Delia whiled away in the Middle East.

“The best memories I have of being in Lebanon are sitting on the beach in a little tent-style restaurant similar to this, where you don’t even get a menu,” he says.

“We want to create a little oasis away from what’s been such a fucking challenging year. Because let’s face it, no one’s going to the Middle East or the Mediterranean. You can’t even go to Sydney.”

On the cocktail list, expect spicy Middle Eastern takes on the classics – such as saffron-spiked Aperol Spritzes and zaatar-infused Margaritas – as well as Maha’s signature Pomegranate Sour. Plus, a punchy wine list, and beers from Brick Lane in the Dandenongs.

The menu will be snacky and meze-focused, and “not set in stone”. You might get freshly shucked oysters; little buns slathered with caviar or taramasalata; and cheesy basturma (Turkish cured beef) sandwiches with capsicum chutney on Baker Bleu bread.

On weekends, there’ll also be Middle Eastern-style yum cha for brunch. Roving waiters will be armed with trays of dishes such as kataifi-wrapped haloumi with fennel-seed honey; lemony fatteh (loaded Lebanese flatbread) with smoked trout, chickpeas, toasted nuts and tahini; and fried eggs with challah, sujuk (spicy sausage) and burnt-sesame butter. You can make it boozy with Bloody Marys or an array of champagnes, but there’ll also be freshly squeezed juices. Plus, brunch will be a dog-friendly occasion.

Essentially, Delia wants Melburnians to lap up a summer of outdoor dining after being cooped up for most of the year. “We’re not going to be here for a long time,” he says. “We want people to get in while they can, have a great time, and then move into winter.”

Layla runs from November 11 until the end of March.