The cult croissanterie’s second shop will be reminiscent of its Fitzroy sibling, but built for the city crowd, with a truncated menu, and espresso bar-style benches so visitors can down a pain au chocolat and coffee between meetings. 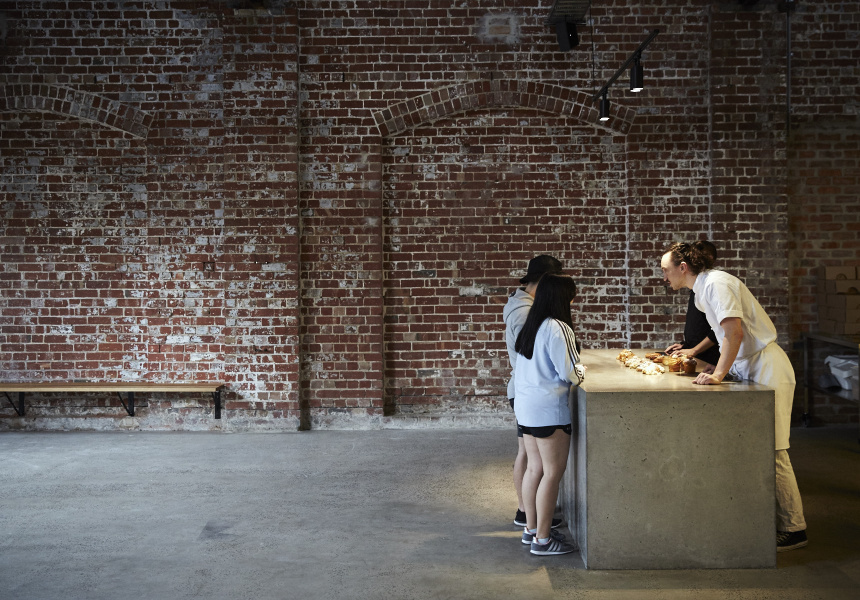 There’s paper over the windows of a Russell Street shopfront between Collins Street and Flinders Lane. You’d easily miss it if you walked past, but you won’t from next week: it’ll be the place with people queuing outside.

The CBD outpost – a minimalist, concrete-laden “unbakery” as Reid describes it – is clearly a sibling of Lune’s dramatic Fitzroy headquarters.

“I'm really excited to see it full of people and pastries, but right now it feels space-age Brutalist,” she explains. “It’s drawn very strongly from the Fitzroy design. It’s got low ceilings; it’s got a bit of a bunker feel to it.

“When we stripped it all back, all the walls were concrete and exposed brick, and very similar to the feel of the pre-existing building of Lune Fitzroy.”

Reid designed the CBD store, located at the base of the historic T&G Building, with co-owners Cameron Reid (her brother) and Nathan Toleman.

Two strips of LED lights race up the wall and across the ceiling. The wall opposite is clad in black mirror, reflecting the fluorescent tubes.

“While it’s not the same as the lighting in the cube, you know its a little sister,” says Reid, referring to the glass-encased “Lune Lab” in Fitzroy, where croissants are prepared in view of every visitor.

Customers won’t get to see raw pastry being made in the CBD – all the dough is prepared in Fitzroy, then transported 10 minutes away to Russell Street to prove and bake on-site throughout the day.

The menu will include a short list of Lune classics: the plain croissant, pain au chocolat, almond, ham and gruyere, and the lemon-curd cruffin.

“From time to time, if we've made a big batch of special cruffins, we might send the filling to the CBD, but typically it will be five classic items on the menu,” Reid says.

“We're going to be attracting people in a different demographic – people on their way to work. They don’t have time to wait while customers choose from 15 different flavours, so we’ve created a truncated menu of the classics. Hopefully they'll treat Lune as their regular morning choice.”

There's nowhere to sit in, but they’re going for “an Italian espresso bar vibe” with “three fairly generous bar areas” for customers to stand at with their coffee and croissant.

“There's a big island bar in the centre of the customer area, and a beautiful bar in the window. The sun comes in the window in the morning and you stand and watch the world go by,” Reid says. The third standing bar, which like the others is made of poured concrete, gives customers a view of the patissiers egg-washing and baking Lune’s world-famous croissants.

Reid expects to open from 7am until 3pm, Monday to Friday, but it depends if they can keep up. They’ll use the first week to see if they can “come close to meeting the demand we might experience.”

“In Fitzroy, [Lune] is almost a destination – you have to know it to go there,” she continues. “In the city, thousands of people will walk past who have never heard of Lune, so hopefully we'll really expand our customer base.

“There will be people who choose to get their Lune fix in the city, but we don’t want to take away from how special that Fitzroy space is to visit. There’s something about coming to Fitzroy and seeing the whole process – standing and watching that raw pastry being made is a form of food theatre … We still want people to come to the Fitzroy headquarters to see the crazy flavours we're doing.”