In partnership with Philadelphia cream cheese, we’re working with some of our favourite cafes to create unique lunch dishes. Manchester Press have created this sweet, multicolour wonder. Lee Skyrme, manager of Manchester Press in the CBD, has been serving classic bagel combinations for the past five years. He wants to try a combination that stands out from your typical Reuben.

“We’ve been making the same bagels since we opened,” says Skyrme. “Same old, same old. So doing something like this is great because we’re giving the people what they want, but being a little unexpected, too.”

Skyrme is talking about Manchester Press’s limited-edition Blueberry Cheesecake Rainbow Bagel. He assures us it’s not as overindulgent as it appears.

“It’s actually all-natural colouring with no artificial dyes,” he says. “We wanted something sweet but nothing with tonnes of sugar. Natural is the way to go.”

The colour of this limited-edition delight, made exclusively for Manchester Press by New York Bagels, comes from fresh fruit. Slathered inside is Philadelphia cream cheese with lemon zest and blueberries. As the name suggests, it tastes a bit like a summery version of a blueberry cheesecake.

“It’s pretty fresh, and has the smooth, silky texture of the PHILADELPHIA cream cheese,” says Skyrme. "We try not to crush up the blueberries as we’re mixing the cream-cheese filling, so you can feel them pop when you bite into it.”

It was Skyrme’s love of the Big Apple that inspired the colourful creation.

“There’s a place in Brooklyn that does them,” he says. “I’ve always had an affection for New York and I wanted to bring a little piece of it here.”

For those interested in trying it at home, Skyrme recommends using a blueberry or sweet bagel. “The rainbow bagel is going to be exclusive to us for a while, but these would bring similar sweet flavours and help to replicate the taste,” he says.

It’s the kind of dish best suited to lunch, which according to Skyrme can start at Manchester Press as early as 10am.

“We’ve definitely noticed a change in the times people come in during the day,” he says. “Five years ago our peak times were 12pm to 2pm, and now it’s more like 10am to 1pm. I find myself following the same pattern when I go out; I’m usually going out for lunch at about 10am to 11am.”

Another change he’s noticed is Melbourne’s keen incorporation of food trends. Two years ago when meat smoking and barbequing hit its peak of popularity in the city, he jumped aboard and introduced brisket and pulled pork to the menu.

“It’s all about giving the people what they want,” he says.

Update: This item is no longer available in-store. Here's how to make Manchester Press’s Blueberry Cheesecake Rainbow Bagel at home.

Ingredients:
1 bagel, sliced in half and toasted (a blueberry or sweet bagel is best, but plain will work too)
75g Philadelphia cream cheese (room temperature)
75g fresh blueberries
1 tsp lemon juice
Zest of half a lemon
2 tsp icing sugar

Method:
Combine all filling ingredients in a bowl and mix thoroughly. Spread mixture evenly onto your toasted bagel.

This article is presented in partnership with PHILADELPHIA Spreadable Cream Cheese. Featuring the signature smooth creamy texture of PHILADELPHIA cream cheese, we've worked with some of our favourite cafes to design this limited edition lunch menu item, available in-store now. 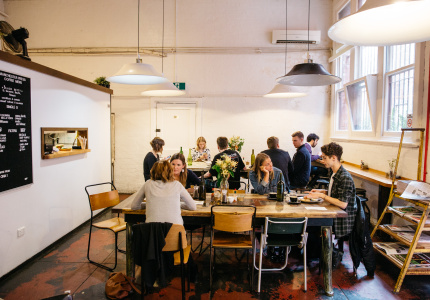 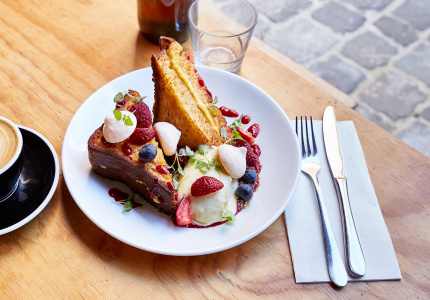