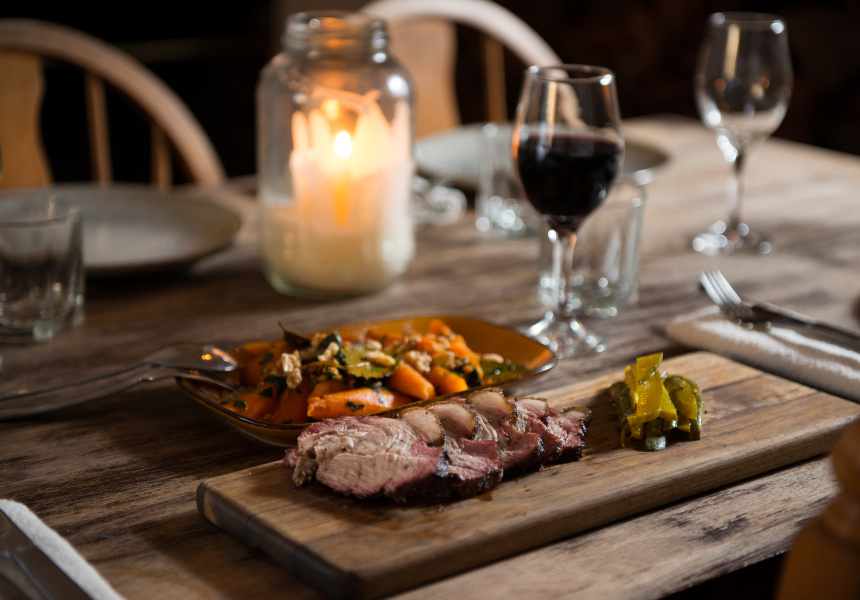 Behind the familiar social section of The Worker’s Club in Fitzroy is a small eatery that feels a thousand miles from Melbourne. The team from Ironbark BBQ (Dave Barron, Paul Hammond and Nat Prescutto), which has been catering to hungry patrons at The Worker’s with a pop-up for the past six months, has opened its own proper little dining area, The Lumber Yard.

Hammond and Barron are both from the UK and have put a traditional British spin on their American barbeque. You’ll find house-made blood pudding with green apple and celery slaw, and a full-flavoured pastrami made from beef cheek paired with pickled beetroot and horseradish. Barron says that the pastrami is Lumber Yard’s homage to the Katz’s New York Deli version, but using beef cheek instead of brisket means it can absorb just a bit more flavor.

From the grill is a choice of lamb ribs with vinegar-mint dressing, or another version of the beef cheek, this time slow cooked in a beer braise to melt in your mouth and served with pickled onion. For the vegetarians, there’s a mac‘n’cheese made with vintage cheddar, unpasteurised Gruyere and shaved mushrooms.

To complement this hot British mess, mix it up with sides of smoked carrots, creamy potato mash with parsley liquor, or a bubble-and-squeak corn bread.

To finish, an old British favourite of Barron’s: the choc ice. We Aussies know it as an Eskimo Pie, and the Ironbark team is getting some help from Gelato Messina to recreate this nostalgic dessert.

Old-school jazz and blues music plays in the background, without the noise from the bar area seeping through. An open fire, walls adorned with old-fashioned wood-working tools and taxidermy make you feel like perhaps you’re sitting in a log cabin in the woods, rather than on a busy street corner in Fitzroy.