Up All Night To Get Some (Breakfast) Situated down the Jam Factory end of Chapel Street, Lucky Penny opened its doors only two weeks ago and word has spread about the knowledgeable baristas, punchy chili oil and Black Ruby gluten-free bread.

Jason Chan and Vanessa Nitsos, formerly of Reservoir’s Lady Bower Cafe, teamed up with Matt ‘Lanis’ Lanigan and Justin Re, both of whom are successful entrepreneurs devoted to the Melbourne food scene.

Designed by Biasol Studio, the interior is influenced by vintage modernism with a rustic Scandinavian vibe. The space is painted all white with blonde-wood floors, high tables, greenery and minimal clutter. The cafe bar is made from reclaimed timber and accompanied by shelf space holding jars of homemade preserves.

Chef Chan is channeling a home-cooked vibe, which he recreates through locally selected, high-quality produce from freshly baked bread to bacon. Breakfast and brunch is all day and all encompassing. It ranges from raw to comfort food, such as the granola served with seasonal yoghurt and carrot slice. The Superfood Breakfast Bowl is also popular; it’s a smoothie in a bowl, with blueberries, banana, and buckwheat served with chia seeds, nuts and kiwi fruit. 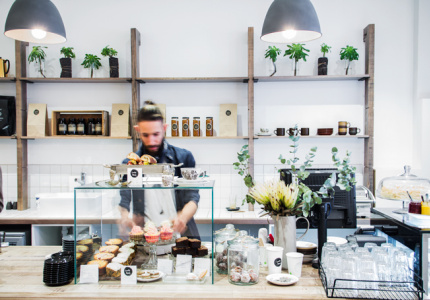