A New Italian Restaurant by The Lucas Group

The Chin Chin team looks for a CBD site. Chris Lucas has his hands full. He already owns Chin Chin, Baby Pizza, Kong and Hawker Hall. On the way: a second Chin Chin in Sydney, an unnamed Japanese restaurant on Flinders Lane and something else on Smith Street in Fitzroy.

And yet, he’s not too busy to open a new CBD restaurant with Harry Lilai, the chef best known for his time at 400 Gradi, Cecconi’s and the Fitzroy Town Hall Hotel. The pair has been friends for “the best part of 20 years”. A couple of months ago, Lilai dropped into Baby for a chat.

“We got this idea that Harry would come on board and help us develop a stronger Italian focus within the Lucas Group,” Lucas says.

Initially, the idea was that Lilai would polish Baby’s menu and give it a more regional focus. The new version was released today, featuring capretto al forno (slow-braised goat) and re-worked pastas, such as a cream-free carbonara.

“It just so happens that at the same time we were having a bit of a yakka and a couple of bottles of barolo,” Lucas says, “Anthony Simone from Simone’s in Bright came to see me, and explained that his parents were selling up the business.”

Talk about serendipity. Simone has signed on as head chef at the new, unnamed restaurant, which Lucas is yet to find a site for, or even really decide on a concept. He does know it will be more refined than Baby. Lilai will serve as executive chef, splitting his time between the two spots.

“One guy’s a young guy, one guy’s been around a long time, so it’s a really great blend of youth and experience,” Lucas says. “For me it’s almost the perfect ingredients.

“I almost felt an obligation that I had to open another restaurant. But by that stage we’d hit the third bottle of barolo, so I could probably get talked into anything.” 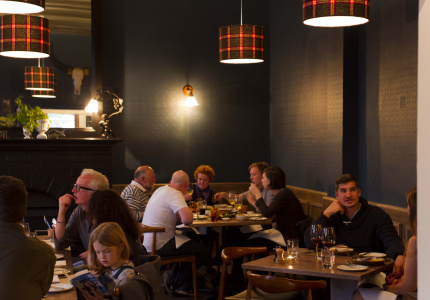