A Look Inside Entrecôte City 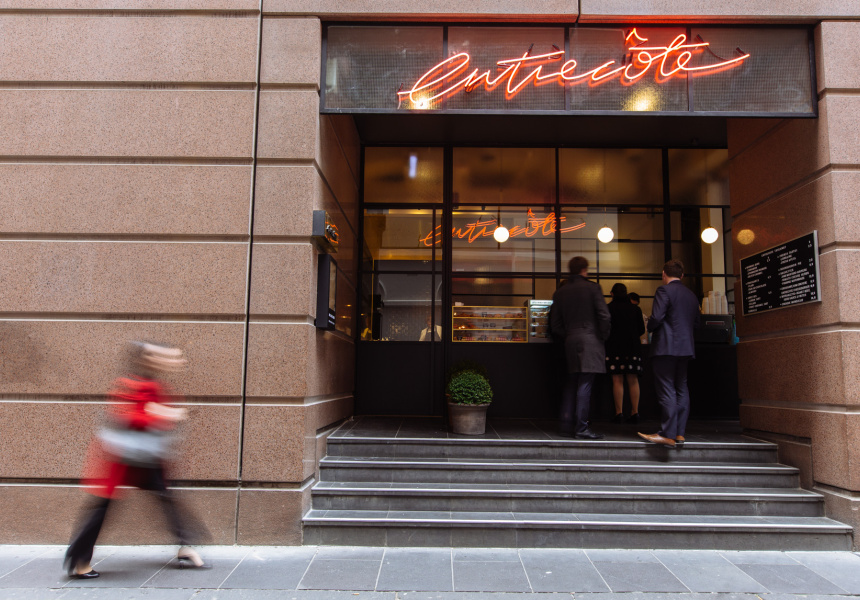 There’s only one main meal on the menu at Entrecôte: steak. More specifically, it’s grass-fed Black Angus Porterhouse from Hopkins River, with the very secret sauce maison and limitless frites.

Lord knows it works at Entrecôte V1; the South Yarra venue was so popular restaurateur Jason M Jones was convinced to bring his Parisian bistro joint to the CBD. “I’d always planned to open the first Entrecôte in the city, but when the opportunity came to take over South Yarra, that was the pilot store,” says Jones. “That was really the catalyst to see whether it worked.”

It did and does work, and it’s replicated en masse at the Alfred Place site. Serving from 7am until midnight, Entrecôte stays true to its Gallic DNA by offering a full-menu all day long. Along with the compulsory bifteck, there’s a selection of around ten hors d’oeuvres, including spanner crab tartine with witlof, cress and pickled shallot; escargot in garlic butter; onion soup; and the simple but wildly satisfying “prawns mayonnaise”. “We’re not messing with anything,” says Jones. “It’s purely true classics.”

The wine list’s equally Francophillic, tending mainly to old-world wines. “It’s predominantly, 80 per cent French,” says Jones. “But because it’s the city, the boys love their big Barossa shiraz and their classic reds, so there’s a smattering of big and famous reds. We’ve got a fair bit of aged stuff coming into the auctions.”

Now Melbourne’s Entrecôte is safely opened, Jones has his sights set on interstate expansion, with a Sydney outlet likely in the next six months. “From day one, it was always set up for expansion,” he says.

And, while Jones’ and Philippa Sibley’s ticketed dining experiment, Prix Fixe, ultimately came to an end, Jones insists he’s not done with the model. “We were probably a bit ahead of the time as far as pre-booking was concerned,” he says. “We’d just do it bigger. Prix Fixe was too small. Friday, Saturday nights you could have done 200 people, but during the week it was harder to fill. We just need more seats, but I’d definitely do it again.”