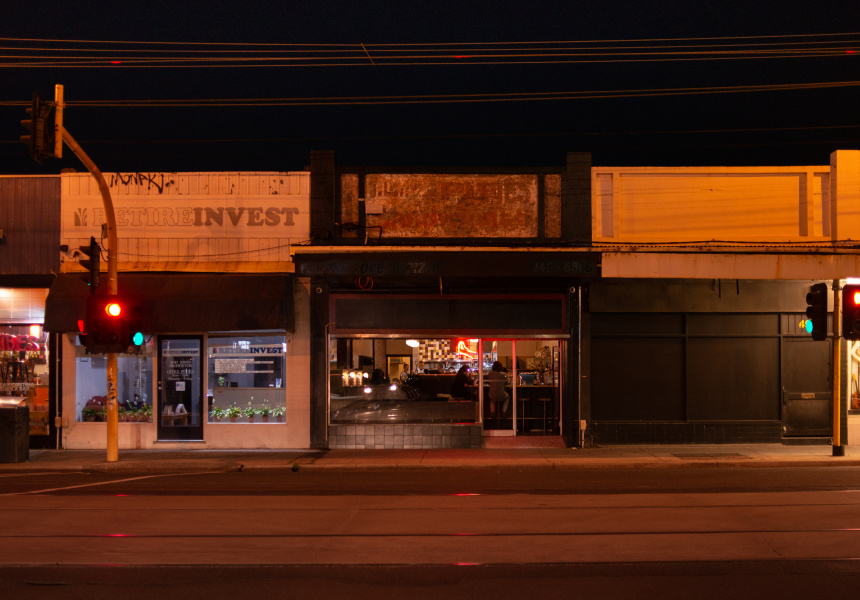 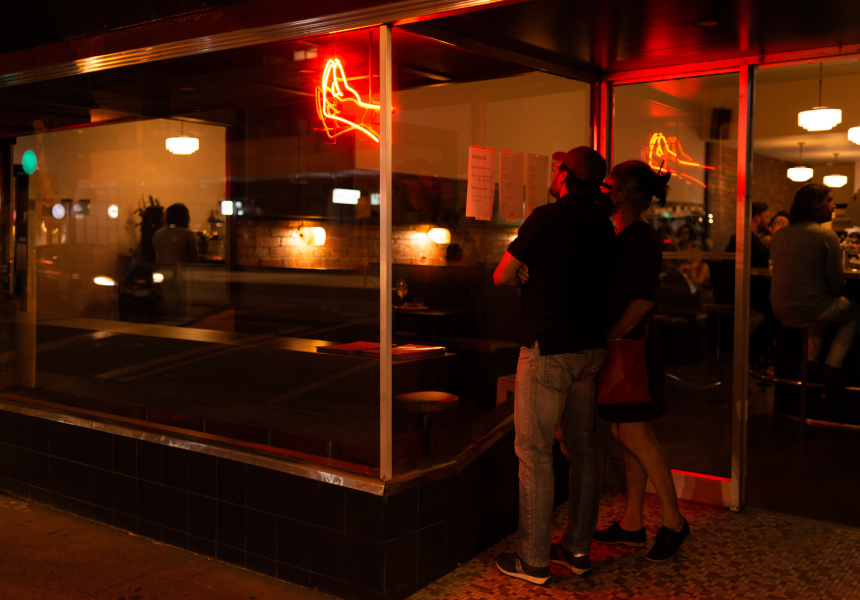 Before ever stepping foot in Va Penne – a new addition to High Street, Northcote – I was struck by the animated, neon red hand (with “pinched fingers”) flickering in the window. A classic Italian gesture, it translates to something like, “Whaddaya want?” It’s bold, a bit flippant, but ultimately charming – just like this dimly lit Italian bar and eatery. (And its name is a pasta-y play on va bene, which means “alright” in Italian.)

“The original concept was to create somewhere friendly and casual where you can drop by on the way home from work or hang out before a gig starts and not get booted,” says co-owner Szebastiaan Butler, who opened the restaurant with long-time business partner Gustavo Gonzalez. Together they also own Joe’s Shoe Store down the road, which sort-of inspired this new venue.

“A lot of the people that used to visit Joe’s have now moved on,” says Butler. “They’re like, ‘It’s too loud, it’s dark’. This is a bit more adult-contemporary. The music’s not as loud, but it’s just as good.”

On heavy rotation is a mix of Italian new-wave, soul and rock selected by front-of-house manager Lazlo Evenhuis. International travel restrictions notwithstanding, he visits Italy every two years to buy records and work at a Piedemonte winery, which informs the restaurant’s beverage selection.

Like Joe’s, the drinks list at Va Penne is short but sharp – and reasonably priced. Vermouth is a big focus, present across about half of the cocktail menu (try a sour made with chinato, an aromatised wine somewhere between a vermouth and an amaro). “People are looking beyond Aperol for something to kick off a night with,” says Evenhuis.

For those averse to strong botanicals, the Bizarro Spritz blends a mild citrus-infused aperitivo by Delinquente with prosecco and rosemary. There’s also a small selection of local and Italian beers (Peroni Red included) and, of course, wine. The list is centred mostly around Italian-style drops, but that doesn’t mean they’re all imports. “There are more and more local producers playing with Italian grape varieties in Australia, largely for environmental reasons,” Evenhuis says.

Va Penne’s food menu is also locally minded and intentionally minimal, leaving room for rotating specials. “We’re not reinventing the wheel,” says head chef Mario Fijan. “We’re just looking around in the local area, seeing who’s doing what and trying not to do the same.”

Small antipasti plates (think house-made pickles, salsa-verde-doused burrata and salumi) come with a breadbasket, which includes crisp, cracker-like Sardinian flatbread made in-house. There’s also a pork-and-fennel meatball ragu studded with speck; a rotolo pasta (loaded with Tuscan cabbage and ricotta) that’s poached then pan-fried in brown butter; and a garlicky spaghetti vongole – swimming gloriously in oil – that Evenhuis (rightly) says is “the one people are travelling for.”

There’s also a selection of punchy 11-inch pizzas, with toppings such as gorgonzola, fig and vincotto; and broccoli, white anchovies and chilli.

While the menu has no particular regional focus, it will change with the seasons. Southern-Italian dishes and ingredients will take pride of place in summer and spring, while the team will move towards northern-style cooking in the cooler months.

Va Penne has an outdoor courtyard, which has room for 40 people. Inside, there’s a curved front bar, exposed red brick and cosy booth seating built by the same person responsible for the Joe’s fit-out – a dose of familiarity for those not quite ready to move on.

This article first appeared on Broadsheet on February 17, 2021. Menu items may have changed since publication.