For visionary chef Massimo Bottura, running the best Italian restaurant in the world isn’t enough. During a visit to Melbourne, he tells us about his next project, and why the Pope is backing it. 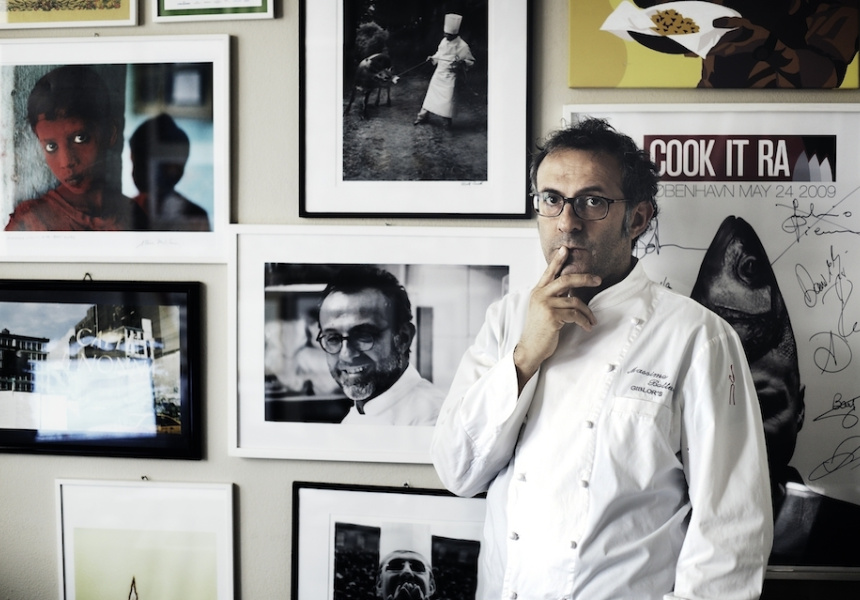 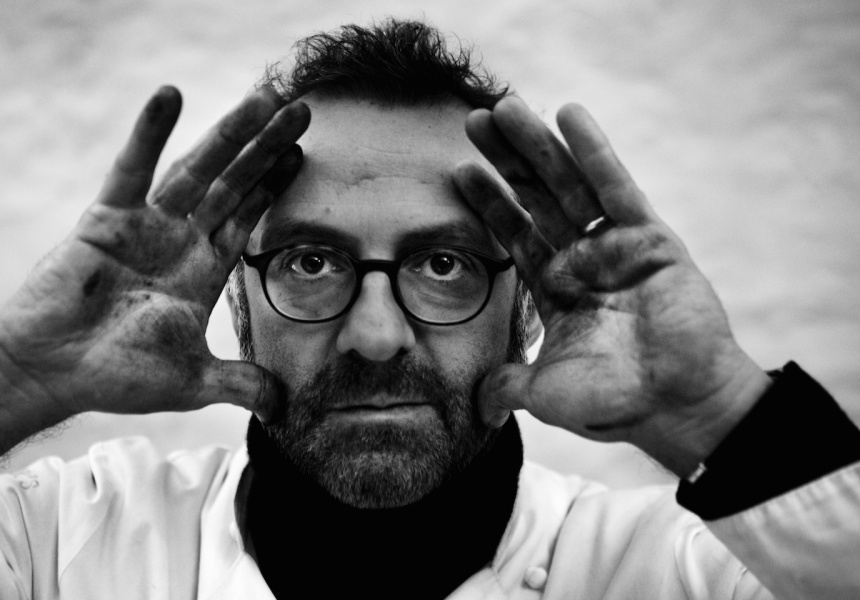 When the folks at Google or Nike want to know how to inject more creativity into their business decisions, who do they turn to? Or when Ferrari needs advice about how it can make cars that respect history, but also embrace the future, who’s top of their list?

They beat a path to Modena, a regional Italian city about the size of Geelong, to glean the wisdom of the owner of a small 25-seat restaurant in Modena’s Old City.

Osteria Francescana, established and run by Massimo Bottura since 1995, may be pocket-sized (often there is more kitchen staff than diners), but it is also without doubt one the best restaurants in the world. It has placed in the top five in the S. Pellegrino World’s Best Restaurants every year since 2010. This year it was number three.

Visiting Melbourne recently to promote his new book, Never Trust a Skinny Italian Chef, the 52-year-old Bottura says unashamedly that his approach to cooking, with art and creativity at its centre, can be applied far beyond the culinary world.

“What I said to Ferrari is you can’t defeat the past,” says Bottura. “They know that you have to start from the past because the past is so important but you have to look at the past in a critical way, not a nostalgic way.”

“There are three things that cannot be tampered with in Italy: football, the Pope and your grandmother’s recipes,” Bottura writes in the book. “Nevertheless, in the kitchens of Osteria Francescana we pry, poke and question the authority of our culinary traditions.”

This approach has produced dishes at Osteria Francescana, all documented in the book, such as a ‘meatless’ Osso Bucco (instead it’s just two reductions complemented by pure white Japanese Sakamai rice) and Bottura’s equally minimalist take on the lasagna (called ‘The Crunchy Part of the Lasagna’), with alternating triangles of crispy pasta and Parmigiano crackers each sitting on top of dollops of béchamel foam.

These two dishes, and 48 others from Bottura’s time at Osteria Francescana, are sumptuously detailed in the new book, a painstaking English-language collaboration between Bottura and his American wife, Lara Gilmour.

The offering is not so much a cookbook but rather a series of written and photographic portraits of each dish. If you’re curious about the recipes, they’re tucked away at the back. But be warned: almost everything is way outside the range of even a very good home cook.

For Bottura the complexity of the food is a direct result of an approach that elevates two things above all else: ideas and taste.

“Food has to be good, not just interesting,” says Bottura.

“But at the same time, cooking is an intellectual act. Your brain is the main ingredient.”

This drive to put ideas on the plate has lead Bottura not just to the offices of footwear companies and car manufacturers but it has also inspired efforts to create social change where food is the main ingredient.

When Modena was hit by an earthquake in 2012, Bottura spearheaded a push to rescue 360,000 wheels of Parmigiano Reggiano cheese that were damaged in the quake, putting businesses and hundreds of jobs at risk.

Bottura responded by creating new Parmigiano recipes that he distributed to stoke demand for the damaged cheese, which he arranged to be repackaged and sold at special collection points around the city, with the help of the cheesemakers and other restauranteurs.

Within six months, all the damaged cheese had been sold.

“This is recipe as social justice,” says Bottura. “No one lost their jobs. Not a single company closed down.”

Now Bottura’s seemingly never-ending energy is being applied to a new project as part of Milan’s hosting of the World Expo next year. Bottura is setting up a mess hall, or refectory, in a disused theatre that will feed the homeless and students using food rescued from the Expo’s pavilions.

He’s already got the endorsement of Pope Francis, who has thrown resources behind the project. A who’s who of world gastronomic superstars, such as French-born luminary and Bottura mentor Alain Ducasse, Brazilian wunderkind Alex Atala and even Melbourne’s own Ben Shewry (Bottura dined at Shewry’s Attica during his visit), have agreed to do stints in the kitchen.

“We are giving life to a building that is dead, as we give life to the food that is almost dead,” said Bottura.

He’s already been approached by groups in Peru and Argentina that want to replicate the rescued-food-refectory concept. He says he would love to bring the idea to Melbourne.

The Milan refectory is just the latest instance of Bottura pursuing projects that elevate food above the merely culinary and into the realms of the artistic and socially conscious. And he’s always striving to go higher.

“My biggest nightmare is that one day I wake up in the morning and I have stopped dreaming. The idea of not dreaming any more is a nightmare."