A beachy brunch and lunch spot from the duo that brought us Moby 3143. Christina Higgins and Steve Svensen brought us their perennially packed Armadale cafe Moby at the end of 2016. Now the pair has backed it up with another cafe, Lenny, in Albert Park.

Although it stands alone from its predecessor, the duo has been led by Moby’s wins. “We know what works,” Higgins says. “So we’ve tried to incorporate the things that are great from Moby and bring it into Lenny.”

One of those aspects being their choice of Windsor-based design firm Golden to oversee the fit-out. The studio was responsible for Moby’s award-winning interior.

The brief for Lenny: “Something beachy, but not literal.”

Brightly lit with inviting wicker chairs, a pink marble benchtop, and a palette of white and blue, that’s how it feels. Coral accents and a handmade wooden communal table also add to the waterside vibe, but it’s considered and polished, with contemporary light pendants by Australian maker LAAL.

“It’s got that calming effect when you walk in,” says Higgins, comparing the space to Moby, which has more of a “hustle and bustle” atmosphere.

Lenny can seat 90, including outdoor seating on both Victoria Avenue and Page Street. The resort-style umbrellas shade the wide sidewalks and “provide this real pop of colour,” Higgins says.

The co-founders weren’t actively looking to open a new venue, but Albert Park was a place they’d been keeping an eye on for its proximity to the beach and neighbouring suburbs Middle Park and St Kilda. When the heritage corner shop became available in February (previously occupied by The Petty Officer), they jumped.

Head chef Svensen “knew straight away he wanted something a little bit fresher” with regard to the menu. “We’ve taken a few of the favourites from Moby and brought them over,” Higgins says. “But then we’ve also had a bit of fun.”

Here the food line-up is more lunch-focused than at its Armadale sibling. There’s a 16-hour braised-beef-cheek rendang curry, and a pumpkin hummus bowl with lamb kofta. The confit salmon and soba noodles is a stand out for Higgins. Those familiar with Moby will recognise the superfood salad and chicken bao too.

Similarly, the Mr Lenny smoothie (aka Mr Moby) has been carried over because of its popularity. The liquor license is on its way.

The cafe is dog friendly too. In fact, it’s a tribute to Svensen’s vizsla. “Moby was my dog,” Higgins says. “Lenny is Steve’s.”

This article first appeared on Broadsheet on June 22, 2018. Menu items may have changed since publication. 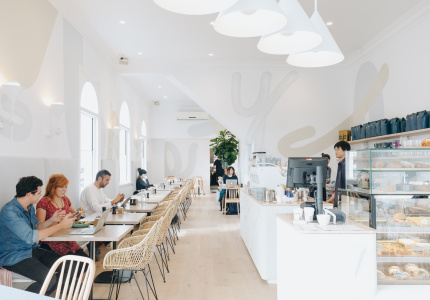