The Lasagne That Kickstarted a Charity Feeding Frontline Workers

Alex Dekker’s sister worked in the covid ward, so he made her a lasagne. Now he provides thousands of meals to those in need. In partnership with the City of Melbourne, we talk to the champion feeding healthcare workers and vulnerable communities. 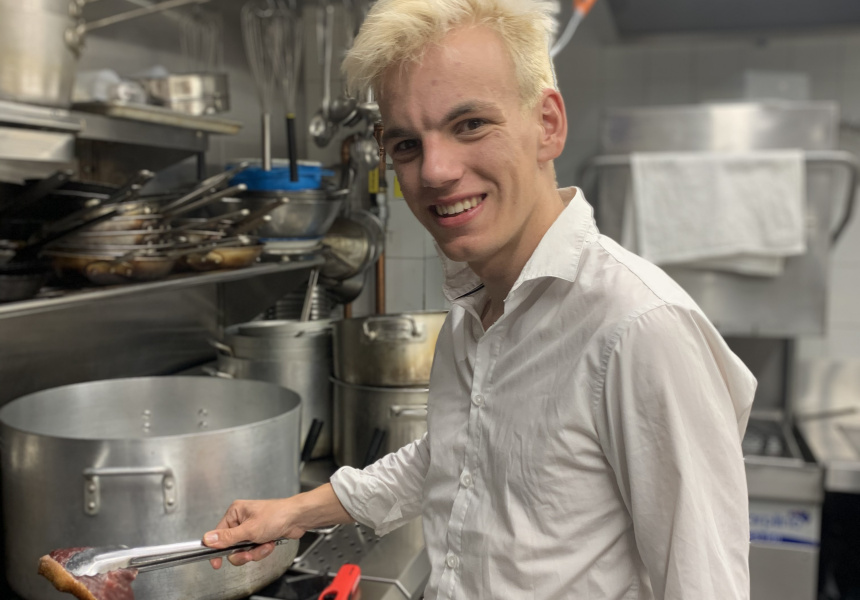 When coronavirus hit Australia earlier this year, the biggest change in university student Alex Dekker’s daily routine was the shift to remote learning. His life plan was still the same: finish his science degree, enter the academic field and work his way up the ladder.

He didn’t think that would all change so drastically in just half a year.

Now Dekker runs Alex Makes Meals, a charity he founded in March to feed frontline and healthcare workers dealing with the pandemic. He quit uni and completely pivoted his career to focus on the initiative.

“So many of the things we’ve done are things I wouldn’t have said were even close to possible six months ago,” he tells Broadsheet. “It’s so far from where I thought my life would be, and it’s so very far from my previous life direction that it all still feels surreal.”

The catalyst was his sister, a doctor at Monash Medical Centre’s covid ward. After finding out that she had only eaten a muesli bar during her long work shift, he offered to make her a lasagne. And since he had a bit of extra time on his hands, he figured he would offer the same to other frontline workers, through a post on Facebook.

“I expected maybe five or ten people to reply, but about 400 did that day, which is a bit more than I had capacity to cook for,” he says. “I was faced with a choice: I could either stop because it wasn’t feasible, or I could do everything I can to feed everyone I could.”

Many, many phone calls and four sleepless nights later, he was all set up in a commercial kitchen with a group of volunteers, and they sent out those first 400 free meals. Since then, he and his 60-strong team of volunteers have scaled up, cooking thousands of free meals each week.

“It was really just an act of brotherly compassion where I wanted to help my sister and on a whim, said I could help other people. And that’s lead to us serving over 100,000 meals,” he says. “We’re doing such incredible work and it’s really been a finding of purpose.”

The charity has been nominated as a finalist for the Melbourne Awards-, which you can watch at home on Channel 9 at 2pm, Saturday 21 November, and highlights community champions who’ve stepped up to serve fellow Melburnians in the face of crisis. But Dekker says much of his success is owed to that same community he strives to help.

“We only showed up because we were needed, and the really amazing thing that’s happened is businesses from all over Melbourne did – and continue to – jump onboard to help us out,” he says. “This really showed me that charity is born from the community pushing us to succeed.”

And while the virus’ spread in Melbourne is slowing down, Alex Makes Meals won’t be slowing down anytime soon. Instead the group’s focus has shifted from hospitals to others in need, such as the homeless, women’s shelters and youth projects.

“The people who are most affected by this are no longer those that are on the frontline, but those who were already the most vulnerable. And when this gave them a bit of a kick in the teeth, we’ve got to help them,” he says. “We serve to anyone and we don’t really ask questions; so long as we’re confident that the meals are going somewhere they need to get to, we make them.”

This article was produced by Broadsheet in partnership with the City of Melbourne. Tune into Channel 9 at 2pm, Saturday 21 November, to watch the Melbourne Awards