When it landed in New York, Eater magazine named it the best fried chicken in the city. Now the first Australian outpost is here. Get ready for tender, crisp fried chicken made using a method perfected over nearly 40 years. Pelicana Chicken is Korea’s largest restaurant chain, with more than 2000 stores in South Korea and outposts in China, Malaysia and America. Eater recently named it the finest fried chicken in New York. And a few weeks ago it finally landed in Melbourne’s CBD.

The Franklin Street 40-seater might resemble a classic hot-chicken shop, but fast food it is not. The process starts two days before you place your order. Whole chickens are marinated for 48 hours, then divided into individual pieces. They’re marinated again, seasoned, then deep-fried for exactly 10 minutes and 30 seconds before landing hot and crisp in front of you.

“You have to show love to the chicken,” says store owner Justin Ko.

The marinade is a secret formula, and it’s been that way since Pelicana first opened in South Korea in 1982. But the origins of Korean fried chicken (or KFC, so often mistaken for the Colonel’s fried bird) go back much further, with some reports it was introduced by American soldiers during the Korean War in the 1950s. However it came to be, KFC is a firm Korean household favourite.

Ko thinks back to eating Pelicana in Korea in the ’90s as a child. “I remember the green boxes back then, how we used to just eat and chat … It’s really a family business in Korea … mum will order Pelicana and they’ll be on a first-name basis [with the owner]. You just feel at home.”

Choose from a half or whole bird, bone-in or boneless. Each order of fried chicken comes with cubes of pickled radish and house-made coleslaw on the side, and topped with your choice of 11 sticky, thick sauces – such as wasabi, honey butter, soy sauce, garlic, and hot and spicy – that balance salty, spicy and sweet in wildly varying ratios.

If you think you're up to it, try the Chicken Eating Challenge, which you'll need to book ahead for. Diners who can eat their way through 2.2 kilograms of fried chicken, a serve of chips and a drink in less than 15 minutes will get their meal for free, score a Pelicana T-shirt and see their name in lights on the Wall of Fame. Ko says only three people have come out on top so far.

"We know it's possible. The last person who completed it did it in 10 minutes 45," he says. "He was shaking and struggling all the way through, but it was so impressive."

On the drinks list there’s rice wine, flavoured soju and Korean beer from Cass and Oriental Brewery. Try a Soju Bomb, similar to a Jagerbomb but made with lager and a shot of soju. There’s also coconut and grape juice, tea, and local brews from Mountain Goat, Pirate Life and Stone & Wood.

Ko says we can expect to see more uniquely Korean sauces hit the menu soon (think pineapple and other fruity flavours). In the meantime, he recommends asking for crushed peanuts – which used to come standard, but have been removed due to allergy concerns – on your chicken for the OG Pelicana experience. 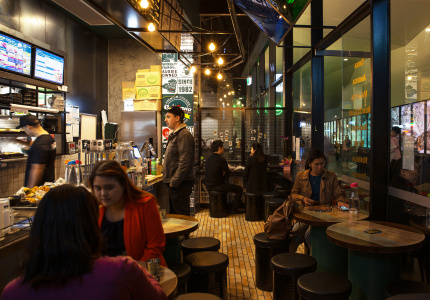