The barbeque trend is still hot and Chin Chin’s Chris Lucas is set to fan the flames with a new restaurant venture to rival the rest – Kong. Chris Lucas, the brains behind still sizzling-hot Chin Chin and Baby Pizza will add another string to his culinary bow in March when he opens Kong, an oriental pit barbeque restaurant.

Located in what was Pearl Café in Richmond, Kong will draw on age-old Asian barbeque and smoking techniques, with “pit master” Dan Briggs, Chin Chin’s sous chef, presiding over the kitchen. The executive chef will be Chin Chin’s Benjamin Cooper.

Lucas, who lived in Japan for three years in the ‘90s, is keen to bring a lesser-known dimension of Asian cooking to Melbourne. “We’ve only seen a sliver in terms of what Japanese and Korean food can represent,” he says. “The cornerstone of both of those cultures has been cooking over hot coals and slow cooking.”

Kong also gives Lucas an opportunity to take a little bit of Chin Chin to another part of Melbourne.

“One of the most popular sections of Chin Chin has been our barbeque items. To me it’s a natural extension to take part of the Chin Chin world into a more specialised eating style, in this case oriental barbeque,” he says.

The 60-seat restaurant will be fitted out by designers Eades and Bergman to feel like a corner Tokyo barbeque spot, with an emphasis on casual dining and takeaway.

Kong will offer a selection of meat, seafood and vegetables cooked over coals and in traditional smoking ovens, served with Asian sides – salads, tofu dishes and, of course, kimchi. 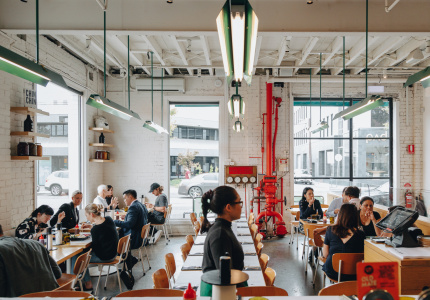