Kombucha, or fermented tea, is a refreshing addition to the fermented-food trend. And it’s beginning to make an impact among our health conscious. 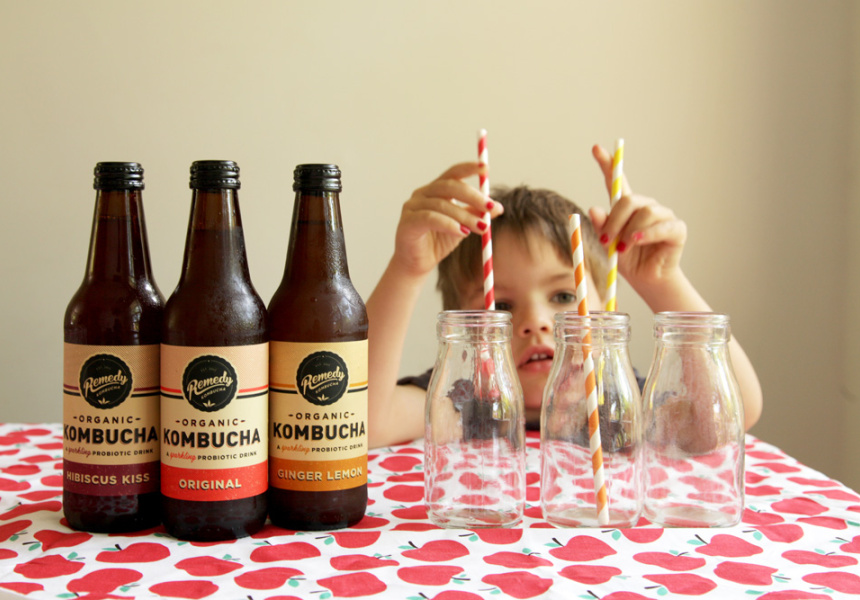 When Emmet Condon and his wife Sarah began experimenting with fermented foods, they had no idea it would lead to a keenly sought after and rapidly developing brand. Remedy Kombucha is a Melbourne-made kombucha drink launched in late 2012 and now it’s stocked across Victoria and is quickly growing its presence in Sydney.

A mix of science, home-brew ingenuity and nutrition, kombucha is an ancient super-drink reborn, and its popularity among health-conscience consumers is growing. Kombucha is essentially a sparkling, fermented black tea. It’s made by brewing a large pot of tea and then, with the addition of mother culture – also known as a SCOBY (symbiotic culture of bacteria and yeast) – it becomes alive. This mother culture activates the drink, propelling it into a living and healing beverage. After a fermentation period of roughly three weeks, the flavour of the drink can be tweaked and perfected by adding fruits, roots and spices to the mix.

Emmet says he began brewing the drink five years ago after some experimentation with fermented yoghurt and other gut-health goods. “We started making it for ourselves, and then our friends started asking for some and then we couldn’t keep up with demand,” says Emmet. What he loves most about kombucha is the way it makes you feel after drinking it. “It’s exciting to be creating something that makes people feel healthier, and this is all part of the appeal.”

Like most fermented products, kombucha heals and energises the body. The real heroes of this drink, though, are the probiotics it’s packed with. They support the nervous system and aid the digestive process.

When it comes to consuming it, quality and quantity are not equal. The best way to consume kombucha is by having a small glass (100 millilitres) at multiple times throughout the day. But this isn’t to say you can't smash a whole bottle in one go. The reason smaller quantities is recommended is because it can be used to energise and kick-start the digestive process, or even to satisfy a strong sugar craving if you drink a sweeter version of the drink, such as Remedy’s Ginger Lemon.

If you’re sceptical about yet another super-food, maybe a brief foray into the figures will settle the doubt. A recent CNBC article highlighted that in the United States alone, kombucha is projected to be a $500 million industry in 2015. The recent explosion of the product on health food shelves is part of a larger movement in consumers’ increased interest in digestive health, seasonal and organic products.

Remedy is well established and readily available on shelves in Victoria, with more than 60 stockists in its home state alone.