The heritage-listed building reopened over the weekend after three years, revealing a shiny new espresso bar, an Italian deli and grocery store, and a rooftop bar with one of the most stunning outlooks in town. 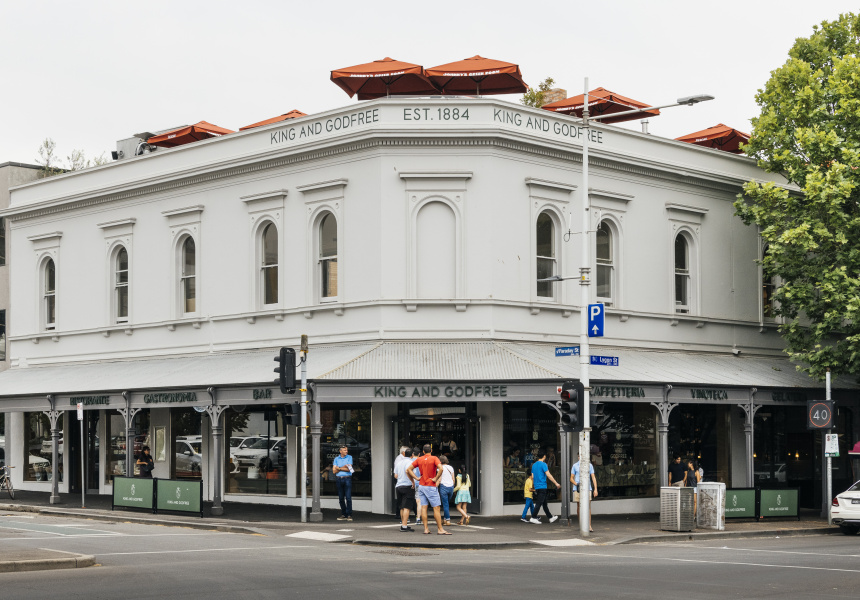 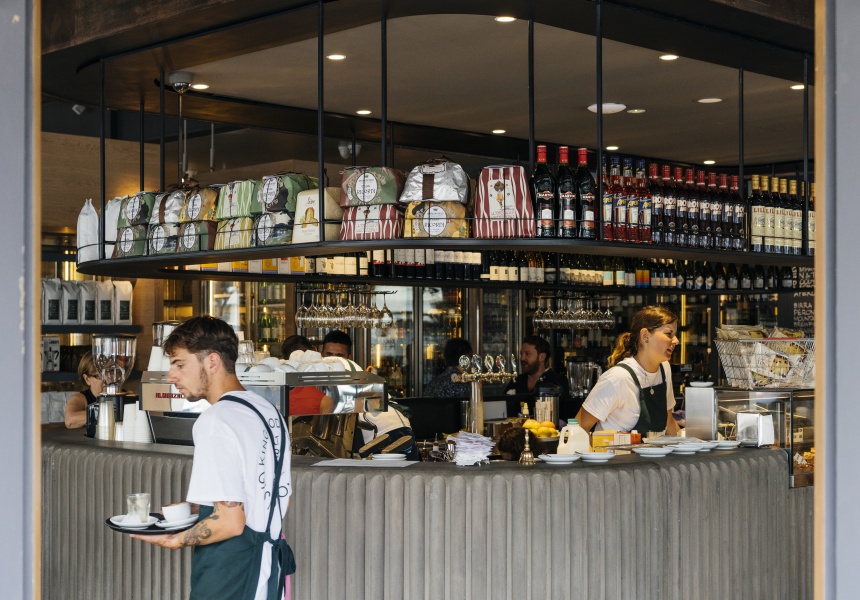 Back in 2015, the heritage-listed King & Godfree building on the corner of Carlton’s Lygon and Faraday streets began a dramatic transformation. While it took longer than expected, the doors have finally reopened.

Carlo Valmorbida bought the iconic building back in 1955, but it was first established in 1884 by George Godfree and Edwin King. Carlo, a pioneer of Italian produce in Melbourne, expanded the site into a labyrinth of shelves stacked with bottles of wine and Italian goods such as Lavazza coffee, Sirena tuna and now-staples such as parmesan, and before long the Valmorbida name became synonymous with Italian culture. The building stayed much the same for decades, with the exception of granddaughter Lisa Valmorbida opening gelataria Pidapipo in one of the ground-level shopfronts in 2014.

Maintaining the heritage of the building formed a large part of the design brief. The King & Godfree crest, removed during a renovation years ago, has been rebuilt by a terrazzo maker. The space feels timeless rather than on trend.

“We’re not trying to reinvent the wheel,” says general manager Anthony Musarra (Van Haandel Group, Estelle Group). “At the end of the day, you eat pasta because it tastes great, not because [the building’s] got fancy bits on it.”

The new King & Godfree is like a tiny microcosm of an Italian market, with an espresso bar, an Italian delicatessen and grocery store, a soon-to-open wine bar and restaurant, and an expansive rooftop bar named Johnny’s Green Room, after a now-closed hangout on Faraday Street.

“[Johnny’s] was an original late-night hotspot back in the ’60s and ’70s in Carlton,” Musarra says of the bar’s namesake. “We just wanted to bring some of that fun energy back.”

Entry to Johnny’s is via King & Godfree lane where a lift takes you to level three. As you walk out onto the open-air space, the aspect is immediately stunning. “Because Lygon Street is so flat, you get this incredible 360 [view] around Melbourne,” Musarra says. “Across the city skyline, Exhibition Building, St Patrick’s, and back north.”

There’s room for 200 patrons, with peach terrazzo benches (made from repurposed steps dating back to the ’50s) topped with navy blue cushions, brick dividing walls, enormous potted plants and marble-topped tables filling the space. A neon-lit Sirena Tonno (tuna) sign has been carefully restored after sitting atop the building for decades, and a 15-metre-long bar sports an impressive drinks list curated by head sommelier James Tait (Lee Ho Fook, Tonka).

The bar menu is all about modern-day Italo snacks designed to sit alongside a Victorian wine on tap, a rhubarb spritz or a Manhattan (made here with Bulleit rye whisky, Averna amaro and walnut bitters), all best enjoyed in the afternoon sun. There’s a veal cotoletta roll with slaw and salsa verde, spaghetti-filled cacio e pepe croquettes, pork and veal meatballs with tomato sugo, salumi plates with mozzarella and pickles, and choc tops from nearby Pidapipo. Hope Street Radio is taking care of tunes, and in winter there’ll be open fireplaces.

Back on ground, the espresso bar seats 45. The tight breakfast menu includes pork-and-fennel sausages with cannellini beans on toast, and scrambled eggs with cured salmon and chives. From 10am, a dedicated panino menu kicks in (sopressa, eggplant and provolone; roast pork; beef with horseradish), or you can build your own sandwich. Of course there’s pasta (amatriciana, lasagne or tuna puttanesca), salads, more Pidapipo gelato, and from 4pm to 7pm it’s aperitivo time, when the cicchetti (small plates) menu becomes available.

Ringwood-based ceramicist Ingrid Tuft is behind the handmade plates, and Lucas Carrington (ex-Allpress in London) is serving up robust house-blend espresso coffee. There’s filter and cold brew too.

The muted tone of the facade is highlighted by pared-back branding courtesy of Projects of Imagination (Supernormal, Laneway Greens, Chin Chin).

“Think back to the days of those big general stores; they weren’t overly posh. They just felt grounded and simple,” Musarra says. “We’ve had a bit of fun with Johnny’s, but nothing’s overembellished.”

Future plans are in motion, with Agostino, a wine bar slash restaurant, to open later this week. Another laneway (off Faraday Street) will eventually lead to a courtyard and kitchen garden.

“One big step,” Musarra says. “Then lots of little steps.”