After a decade with Andrew McConnell, one of the city’s most unheralded chefs is striking out alone. Domain Road is teeming on Saturday mornings. Diners with dogs scope out the park-facing restaurant terraces – the best seats in the house – while joggers line-up for a post-Tan coffee. At Gilson, waiters race between tables delivering blueberry and ricotta fritters, poached eggs, and a distinctive new dish – garfish and charred eggplant on sourdough toast. That’s John Paul Twomey’s work. But you won’t see him, he’s in the kitchen.

Pre-dinner is a better time to chat with Twomey, who took over the kitchen here in May. It’s a little after 6pm on Wednesday in June. A few parties are beginning to fill the spacious South Yarra restaurant across from the Botanic Gardens. Out back in the kitchen, something is quietly stirring.

“I’m still trying to find my feet,” says Twomey as he inspects a parade of uncooked potato focaccias resting in small cast-iron pans, waiting for a spell in the wood-fire oven.

On his laptop, Twomey runs through the prep list with owner Jamie McBride. They peer at the computer, which sits incongruously on the stainless-steel workstation among the knives and boards. McBride, who knew he was getting much more than a garden-variety head chef when he brought on Twomey, is looking for a moderniser.

“I [was] looking for someone who can come and help me realise a vision,” McBride says. "Dining options on the south side are getting better, but the institutions are old. We’re trying to build a contemporary institution. We want to be here in 20 years.”

The situation is familiar terrain for Twomey. Until recently he was second-in-command across Andrew McConnell’s enterprise of Melbourne eateries – including Cumulus, Cutler & Co., Ricky & Pinky and Supernormal – where he helped develop and run virtually every operation for the past decade.

“I’d been with Andrew for 10 years,” says Twomey, who finished up last September. “I needed to do something different. I think I’d gone as far as I could go.”

Twomey, now 35, first appeared on McConnell’s radar in 2005 when he was cooking at Circa in St Kilda. He’d arrived in Melbourne five years earlier on a one-way ticket from Ireland, where he spent summers growing up scrubbing oysters and mussels at his uncle’s small coastal restaurant. After cooking for Chris Lucas and Paul Wilson at the Botanical he spent two years at Circa, before he found himself sitting opposite McConnell, discussing the opportunity to take on the role of head chef at McConnell’s Carlton white tablecloth Three, One, Two.

“He’s got incredible raw talent, a very natural cook,” McConnell says. “He stands apart from a lot of chefs.”

Then in 2013, Twomey got the big call-up. McConnell offered him the role of development chef – a job with the expansive scope of overseeing all the kitchens and “mentoring head chefs”, McConnell says, to help them design menus, train staff and make sure systems ran smoothly both back and front of house. Basically, says Twomey, he was there to provide McConnell with “a fresh pair of eyes over each business”.

Twomey had a hand in all the organs of McConnell’s business. Of all the challenges, he describes the nine months spent setting up Supernormal – the 140-seat Flinders Lane restaurant – as “probably the hardest opening” he’d been involved in.

Twomey faces a similar challenge at Gilson, which seats 125. The kitchen rumbles through three services, breakfast, lunch and dinner, seven days a week. To add to this, he’s overhauled the menu and reorganised virtually everything back of house.

"There aren’t many places in Melbourne that have managed to work across breakfast lunch and dinner,” Twomey says. “But we – Andrew – had success with that at Cumulus in the city. Gilson is designed to be that place, but in a local neighbourhood setting.”

"We’re cooking food that’s exciting,” he adds. “But it’s important that this is food you can eat a few times a week.”

This includes a menu rooted in Italian “that isn’t too fussy” Twomey says, adding that dishes “might travel across the Mediterranean to North Africa or Greece”. It’s a simple, focused approach that, with Twomey’s expertise, McBride believes has taken Gilson’s offering “up a notch”.

Under Twomey, new dinner mains include pumpkin and ricotta ravioli served with brown-butter dressing, and prawn gnocchi with tomato and chilli oil. There are some minor but notable McConnell flourishes, including lamb ribs, which are braised and then flash-fried with dry quinoa and spice coating, served with piped dollops of fermented chilli. Now-gone dishes such as the beef tartare with oyster cream have given way to more diplomatic but satisfying options such as cuttlefish and eggplant bruschetta, and pizzetta from the wood-fire oven. Soon, diners will be able to get a bowl of spaghetti with a glass of wine for $25 on Thursday nights.

“We want people to use Gilson in the way that suits them best. Come in for a coffee after walking the Tan, for a meeting during the week, a quick bowl of pasta after a movie … or a blowout with your friends on Saturday night,” McBride says.

Back in the kitchen, Twomey is still settling into this new environment, but there’s an unmistakable confidence.

He finishes preparing some ribs, then readies another new addition: roasted half-chicken with Jerusalem artichokes plated on top of a fragrant herbed mayonnaise emulsion he calls “green goddess dressing”. Refined, yet unfussy.

Broadsheet director Nick Shelton is a partner in the Domain Botanical Property, a minority investor in Gilson. 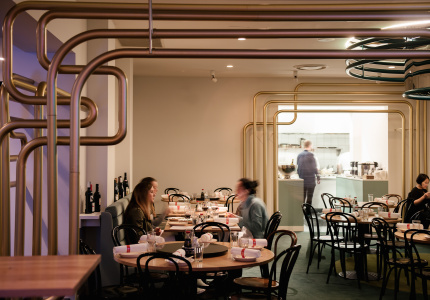 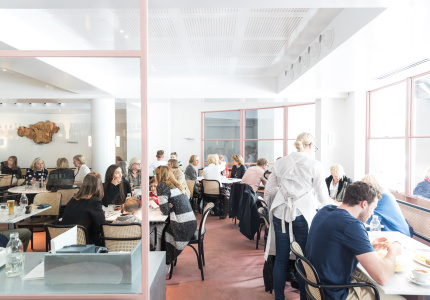