Rumi's Joseph Abboud has teamed up with a Lebanese beer legend to open a new brewery in Reservoir. 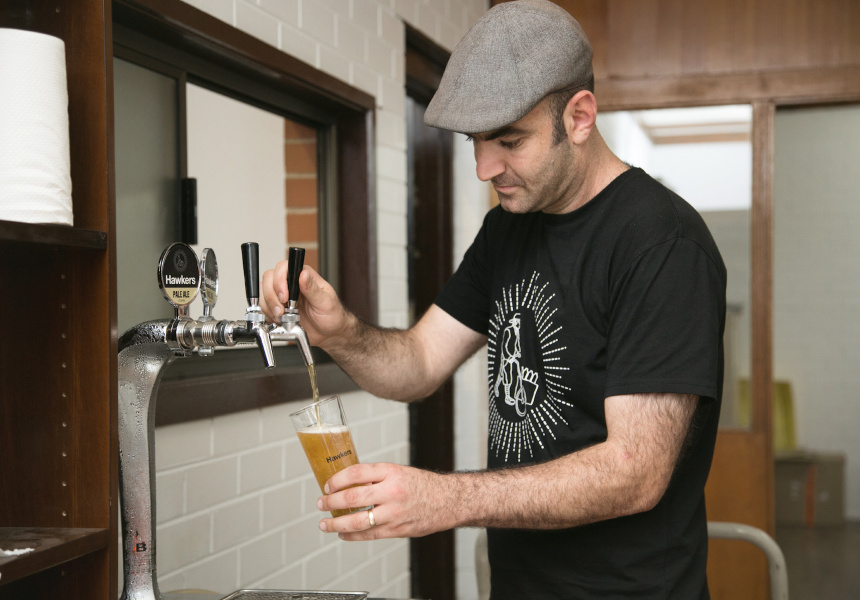 Three years ago Joseph Abboud didn't consider himself a beer drinker. Times have changed. On Monday the chef and restaurateur opened Hawkers, a new brand of beer, with friend Mazen Hajjar out of a brewery in Reservoir.

The pair met after Abboud travelled to Lebanon to source new beers for Rumi and The Moor’s Head, his Middle Eastern-inspired restaurants.

Hajjar is the founder of 961, Lebanon’s first craft brewery. “That was the light- bulb moment for me,” Abboud says, recalling his first sip of 961 Pale Ale, which is spiced with za’atar, sumac, chamomile, sage, anise and mint. “I said, ‘Wow, I didn't realise beer could taste this way.’”

Abboud was soon the exclusive importer of 961 to Australia, and Hajjar joined him here for a brief period to walk from door-to-door hawking the product. The duo’s new brewery is named in honour of this time.

When Hajjar returned for last year's edition of Good Beer Week the two became firmer friends. “We’d go to the bottle shop and buy $300 worth of beer,” Abboud says. “Then we’d just sit there tasting them all, learning about the flavour profiles.”

Their new brewery will cover several such profiles, initially producing an American-style pale ale, a traditional pilsner, an IPA and a saison. Hajjar and his family have moved to Melbourne permanently so he and a local brewer can oversee the operation.

Hawkers Pale Ale will be available for tasting this weekend at the Great Australian Beer Festival at Geelong Racecourse. Specialty bottle shops will stock Hawkers from February 23, and a cellar door is planned for the brewery in the near future.