Together with former Fitzroy pop-up Chotto, the chefs are serving a series of luxurious dishes tied to their food memories, including platters of chirashizushi, or “scattered sushi”; A5 Japanese Wagyu; fried chicken with plum salt; and more. 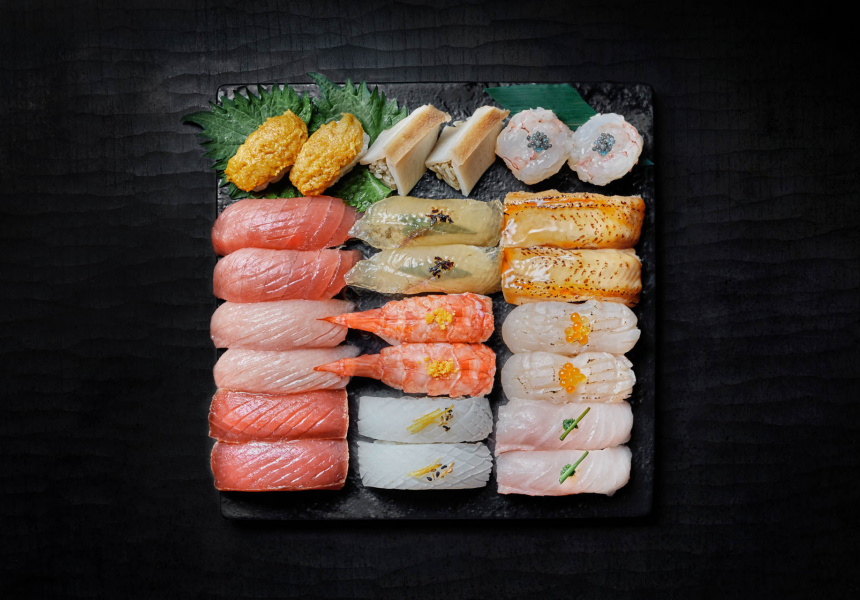 Though also Japanese, the food at Chotto stood in stark contrast to what the two chefs were cooking at Minamishima, which is known for its pure, unadulterated nigiri (raw fish on seasoned rice). Chotto’s menu was based on what you’d get at a ryokan, a traditional Japanese inn.

Now, you can get the best of both as the two join forces on a luxurious at-home menu, with dishes tied to the chefs’ food memories.

Expect elevated takes on nostalgic, comforting Japanese fare. Chirashizushi – known as scattered sushi – is a kaleidoscopic presentation of tuna otoro, engawa (sea flounder fin), Hokkaido scallop, prawn, trout, ikura (salmon caviar) and more, plus nori, cucumber, shiitake, bamboo shoots and snow peas, based on a dish Minamishima’s family would make during summer festivals in Japan. At $150 for two to three people (or $60 for one), it’s a real celebration dish.

A modern take on shabu shabu, a hotpot dish of thinly sliced meat, seafood and vegetables, is a nod to chef Tano’s father, who is also a sushi chef. Growing up in Japan’s Wakayama Prefecture, Tano would go fishing with his father, then together they’d make the dish. The shabu shabu here is Hokkaido king crab and scallops, abalone, scampi, prawns, sashimi-grade fish, vegetables and tofu, and ponzu made with sudachi, a citrus fruit.

There’s also A5 Japanese Wagyu in sukiyaki sauce (a mix of soy sauce, sugar and mirin) with onsen eggs, chrysanthemum greens, leek and noodles; and fried chicken two ways: one with soy, mirin, sake and ginger with black salt, and the other marinated in umeboshi (preserved plums) and dusted with plum salt.

Add a rare sake or wine and get 20 per cent off the dine-in price.

The Minamishima x Chotto At Home menu is available for pick-up and delivery from 4pm to 7pm Tuesday to Saturday. Delivery is $15 for orders over $200 to suburbs within the City of Boroondara, Melbourne, Port Phillip, Stonnington and Yarra.