Long misunderstood as being the cause of hallucinations and blackouts, absinthe is creeping back into inner-city bars and cocktail menus. 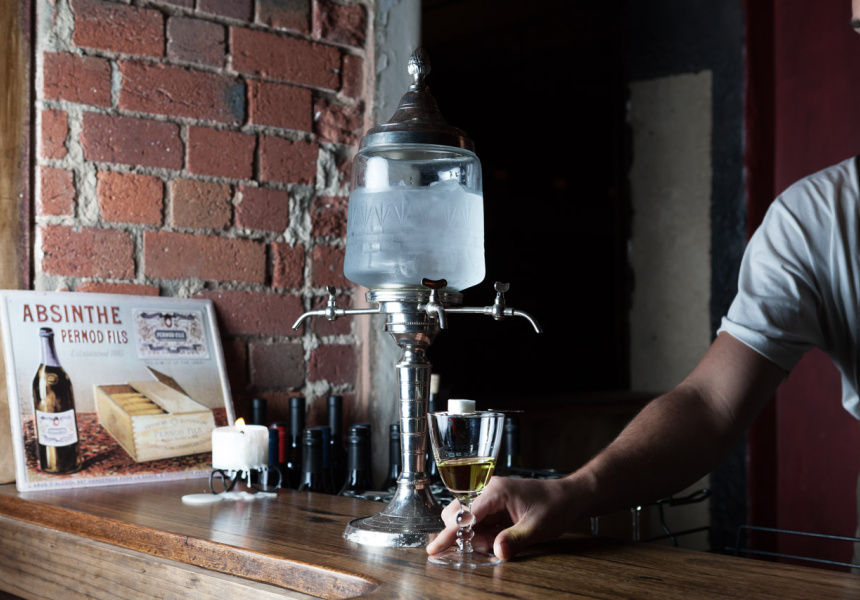 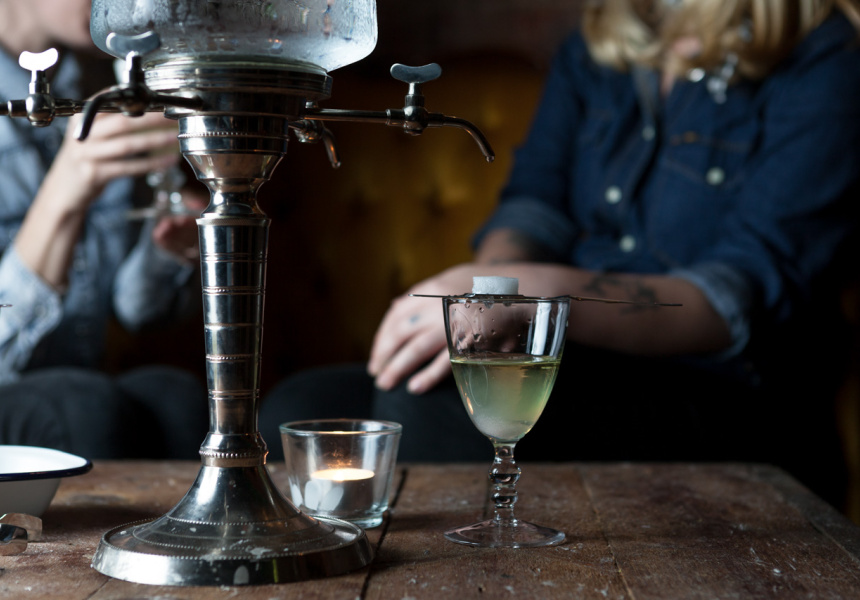 Taking in an absinthe in Bar Ampere in the city, co-owner of the Russell Place venue Benjamin Luzz laughs when he tells the story: “Recently, I offered a customer an absinthe and she said, ‘No, I can’t have absinthe! I have to fly today,’ and then she proceeded to drink three martinis.”

The ongoing misconception about absinthe, the famous green-coloured, anise-flavoured spirit, is that it will cause hallucinations and will have you lassoing pink elephants on Smith Street at 3am.

Luzz is changing that idea. There are other drinks here of course, but the focus is on the many different types of absinthe.

Absinthe gained notoriety in dusky Parisian bars in the late 19th century when it was being drunk by notorious imbibers such as Paul Verlain, Henri de Toulouse-Lautrec, Pablo Picasso, Vincent van Gogh and Oscar Wilde, much to the horror of the prohibitionists of the time. It became associated with a bohemian, creative culture and the stories of hallucinations were probably borne of the fact that it is a highly alcoholic drink. With from 45 to 70 per cent alcohol content, they were just very drunk.

Absinthe is a spirit made from wormwood, sweet fennel and green anise (these three ingredients are referred to as the holy trinity of Absinthe).

Traditionally, there is a ceremonial aspect to enjoying absinthe. A glass is filled with a measure of absinthe, covered with a small slotted spoon and a sugar cube placed on the spoon. The glass is then placed under a tap – some bars will use a specially designed water fountain with multiple taps – and the water drips through the sugar and through the grooves of the spoon to add a sweet dilution to the drink.

It’s personal how much water, sugar (or no sugar) and the type of absinthe one drinks, and Will Balleau of Le Bon Ton in Collingwood, who has opened an absinthe bar in his venue, embraces individualising the drink.

Balleau says it’s important to get to know the styles of absinthe available and what you like about the drink. “When prepared correctly, which means diluted through the fountain and sweetened with a cube of sugar, absinthe drinking moves from a simple swill into an exciting ritual. It becomes a group experience.”

Defining your preference is part of the adventure, French absinthe has a subtlety in its anise-richness, Swiss absinthe is more herbaceous than the French, and Czech absinthe can be a robust, 70-per-cent ABV punch to the palate.

“The range of flavours in the different styles of absinthe allows for a lot of exploration,” says Balleau.

Cocktail bar Eau de Vie (on Malthouse Lane in the city) presents absinthe as the co-star of a cocktail called The Versaille. For a minimum of four people, champagne saucers are filled with Tanqueray gin, lemon juice, pear and apple. Then absinthe is poured into the fountain with lots of ice. The absinthe is added to the gin mix as required or to taste. It’s a twist on the drink and a heady mix, although the anise-rich absinthe sits comfortably with the gin and fruit flavours.

Daniel Monk, owner and operator of the new North Melbourne bar, Joe Taylor, wanted a venue specifically about absinthe, “Although I’ve branched out into French brandies too, Cognacs and Armagnacs, but I have at least 12 types of absinthe.”

Monk says that it’s the mystique surrounding the drink that has attracted him to it, “That and the rich history of it. It’s great to open people’s minds to it and introduce them to something they may not have understood initially.”

Monk serves the drink traditionally with ice, water and sugar cubes but loves it in cocktails. His Nouveau Bleu is a mix of apple eau de vie, Blue Curacao, white absinthe and dehydrated rose petals. He is also planning to hold a ‘Wet Hour’ every day. From 5pm to 7pm, Joe Taylor will serve absinthe-based aperitifs with food to match. “Absinthe goes really well with white meat,” Monk says. “Chicken or pork terrine with tarragon or even a steak tartare.”

So take the plunge with absinthe; through a fountain, in a cocktail, or neat. You won’t be lassoing pink elephants at dawn – but don’t hold us to that.