I Thought Flamin’ Hot Cheetos Ice-Cream Would Spice Up My Life. Instead, It Broke My Heart.

What happens when you combine vanilla soft serve with the nostalgic, spicy Cheetos of your past? You get one fiery, cheesy, salty ice-cream – and one disenchanted writer. 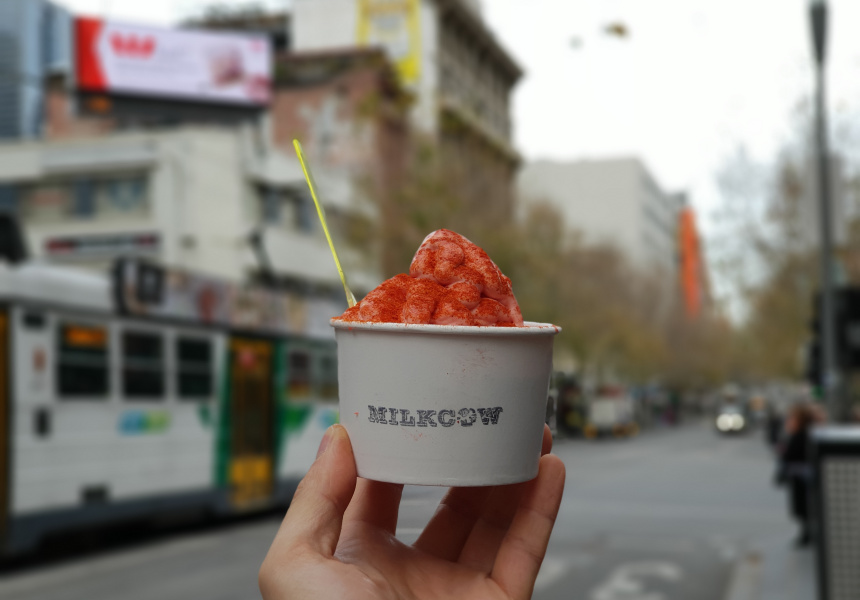 The first time I ever had Flamin’ Hot Cheetos was in the parking lot of a strip mall in East Los Angeles. A friend needed to buy refills for his vape – a very LA problem – so we pulled into the nearest bottle shop. I waited in the car for a short while, then my friend emerged: Juul in one hand, and, in the other, a crimson and orange packet of Cheetos, different to any I’d seen before.

The funny thing is, Flamin’ Hot Cheetos don’t taste very different to classic Cheetos. At least not at first. Flameys (as we diehards call them) creep up on you. When you start a bag you’re thinking of those cute little red puffs as friends. At about the halfway mark though, the heat presents itself. Your throat feels scratchy. Your cheeks feel flushed. But those little bombs of cheddar powder, food dye and MSG are too darn more-ish not to finish.

My approach is to race to the end, so the experience ends with you staring ruefully at Chester Cheetah – the don of the Cheeto empire – and his ice-cold, uncaring face while your eyes well up from the spice.

The strangest thing about that whole crazy ride? I can’t wait to hop on it again. Since I got back from the States I’ve been chasing that Flamin’ Hot high, but I haven’t been able to find them anywhere in Melbourne. Until I heard there’s a place in the CBD serving Flameys. The only catch? They come in ice-cream form.

That place is Milkcow, a popular Korean ice-cream chain with over 50 locations worldwide. Milkcow is well known for creating stunt flavours. Last year, it offered a soft serve topped with 24-karat gold leaf. The year before that was a soft serve studded with candied rashers of bacon. I was apprehensive, but good things can come from strange places. If I had to get my Flamin’ fix from ice-cream, then so be it.

I roped in a friend with whom I’d been planning a civilised evening. He wasn’t thrilled about the derailment of our agenda, but Flamin’ Hot Cheetos ice-cream waits for no-one. So, instead of sipping cocktails on a rooftop, we found ourselves on Swanston Street at Milkcow’s flagship Australian store. We made our approach.

“Has this been popular so far?” I ask a staff member.

“Not yet, we just announced it,” she says.

“Do many people find it spicy?”

“Some people have found it spicy, others not so much.”

Intel in hand, we order it: the Freakin’ Hot Ice-Cream.

Soon the Frankencream emerges, and – good grief – the colour. If you’ve ever wondered what snow-white vanilla soft-serve combined with electric-orange ground-up Cheetos (then dusted with more powdered spicy Cheetos) looks like, I am now equipped to tell you. It looks wrong. To see a glistening, orange ice-cream pulsing cheesy fumes is an unnerving thing.

So how does it taste? The spice wallops you twice. The first comes after a couple of spoonfuls, when the initial kick from the ground-up Cheeto dust lands. The second hit hurts more, because of the betrayal. Digging deeper into your ice-cream for cool vanilla refuge, you’re accosted with even more Flamin’ powder. I never want to have to describe something as being simultaneously sweet, cheesy, spicy and cold ever again.

While it won't be for everyone, for me it was heartbreak in five bites. That’s how long I lasted before I decided it was only tarnishing the orange-tinted nostalgia of my LA holiday.

The truth is, some food memories aren’t worth bringing back from the dead. Let them rest. Recall them with fondness, don’t try to relive them. Because if you try to recreate something, you might just end up with a Flamin’ Hot mess. You were right all along Chester Cheetah, it really ain’t easy being cheesy.

If you’re up for it, Freakin’ Hot Ice-Cream is available at Milkcow, 287 Swanston Street, Melbourne.