Three words. Seventeen letters. Say it and I’m yours. With a filling co-owner Tom Peasnell says is “kinda like a chicken-Kiev mix”, this beautiful molten mess will take you to garlicky nirvana. 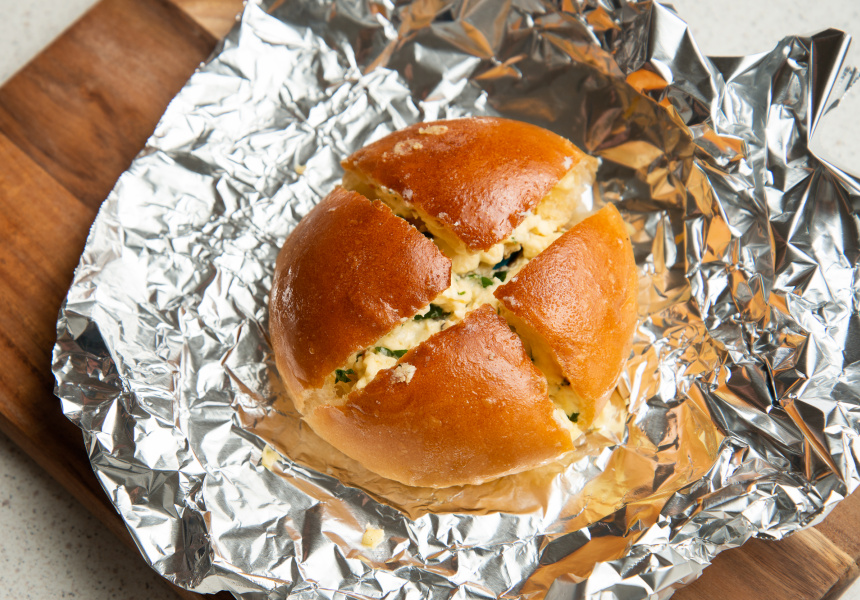 Even shit garlic bread is good. Great, even. The worst frozen, foil-wrapped log you can find in the supermarket freezer aisle still takes me to garlicky nirvana.

So you can imagine the euphoria induced by the slightly less-common take at my favourite pizza joint, Takeaway Pizza in Preston. It elevates garlic bread from starter or sidekick status in such a way that it feels almost disrespectful to quell its aftertaste with a mint.

Until lockdown 5.0, I’d never had anything other than pizza from Takeaway Pizza. And nothing had ever overshadowed the Pineapple – house-smoked ham, rum-soaked pineapple, stracciatella and mozzarella, and red sauce. It’s as singular a Hawaiian experience as The White Lotus. But during my most recent takeaway escapade, I watched that very pizza go cold while preoccupied by something else entirely. I had ordered one of the few picture-less items on Takeaway Pizza’s online visual menu – it simply read: “Pecorino Garlic Bun”. Three words. Seventeen letters. Say it and I’m yours.

It starts with the same kind of demi-brioche bun used across the road at sibling diner Dexter, which is left for a few days to “become stale”, says co-owner Tom Peasnell. Then, piped into a cross-shaped incision, is a mix of confit garlic, lashings of butter and a handful of herbs, plus cream cheese – similar to the Korean street-food snack. Peasnell explains the filling as “kinda like a chicken-Kiev mix” (I’ve never really been a fan, but maybe I just needed to swap chook breast for brioche).

It seems a fairly stock-standard roster of ingredients. But the “aha” moment won’t come until you tear into a quadrant of one of these roasted-to-order, just-garlicky-enough buns. The days-old brioche soaks up all the buttery goodness like a sponge and the cream cheese bubbles away in the middle – “for a nice pulling effect”, Peasnell says. It’s a beautiful molten mess.

And if you don’t feel like the decadence dial is maxxed out, there’s also a bone-marrow version filled with the same stuff used for the house-made pastrami and marrow pizza. Godspeed.

“I Can't Stop Thinking About” is a series about dishes Broadsheet’s editors are obsessed with. Tomas Telegramma is the Melbourne editor.