This sexy, gleaming half-moon was a flaky speck of joy when I first tried it during last year’s lockdown (the big, long and cold one). And every time I’ve had it since – locked down or otherwise – it’s given me wave after wave of pastry-induced serotonin. Instead, let me tell you about a croissant. My favourite croissant ever, I reckon. A perfect, sexy half-moon of laminated pastry glimmering with leatherwood honey and spangled with flakes of sea salt. The sublime creation comes from a little pastry shop in Carlton North called Monforte Viennoiserie.

We cover new openings on Broadsheet every day. But after a while you can start to tell which ones are going to be instant classics. And in my opinion, the one thing all of these successful openings seem to have in common is good timing.

Some places just show up in the right spot at the right time – so immediately familiar that you have a hard time remembering the old tenants, such a part of the furniture that going there just slots right into your routine (you barely even notice that it’s wiggled its way in there).

This teensy two-by-five-metre patisserie opened in September last year, which, as you’ll recall, was a bit of a weird time. We were all limping out of a strict and dreadful winter and trying to learn the difference between a stage in a lockdown and a step on a roadmap.

Everyone in my suburb was ravenous for somewhere new to go or something new to do. And then Monforte opened, and it wasn’t just new – it was bloody excellent. But I didn’t hear about the tiny pastry shop with the tiny menu. I saw it. Because its constant socially distanced queue stretched out so far that it was impossible to miss.

So, I lined up. And by the time I got to the front – because everything sells out every day – the leatherwood honey and sea salt croissant was the only thing left. I’m so glad it was.

Monforte’s chef-owner Giorgia McAllister Forte’s pastries are intricate and creative. She was a pastry chef at Northcote’s All Are Welcome before her side hustle, Monforte, got too successful (don’t you hate it when that happens?). Before that, she cooked in kitchens back home in the UK, including the renowned Violet, whose owner, Claire Ptak, famously baked Prince Harry and Meghan Markle’s wedding cake.

McAlliser Forte’s croissant recipe takes cues from the excellent croissants you’ll find at All Are Welcome and Q le Baker. The leatherwood honey and sea salt croissant was on the inaugural Monforte menu and it’s the only item – aside from the plain croissant – that’s always available (there’s usually a completely different menu every few weeks).

My tastebuds don’t care about technique or credentials, though. They just want to have a good time. And when I tried this croissant, they were giving me a big thumbs up.

Before you even bite into it, you can smell the floral layer of leatherwood honey that envelops it like a gleaming coat of varnish. You know how croissants are usually a huge mess to eat? Well, the honey comes into play there, too. It binds everything together in a way that (mostly) prevents a pastry blizzard from falling on your clothes. Aptly, the inside of the croissant looks like a beehive – a honeycombed warren of supple, buttery arches, like a cave you’d never want to leave. The sweetness of the honey and richness of the butter are reined in by the sea salt, which provides just enough savoury respite to stop the whole thing from being too much.

I’ve done my 10,000 hours of croissant-eating – the good, the bad and the ugly. There are only a few things in my life that I have total confidence in, and one of them is my unwavering ability to tell a good croissant from a bad one.

I grew up in the French schooling system. Instead of a tuck shop, we had a viennoiserie where everyone would meet in the mornings to quaff babycinos and eat croissants before class. (I wish I was exaggerating. We actually did this every morning. We were 12.)

So, trust me on this one. Go out and try this croissant when you can. It’s a self-assured humdinger of a pastry. It’s so good that when I was debating moving from Carlton North at the start of the year, “being close to Monforte” was legitimately on my pros-and-cons list.

But it’s delicious. It’s something you can have right now. And hopefully it will distract you just enough to smile – while you lick the salt and honey off your lips and fingers. 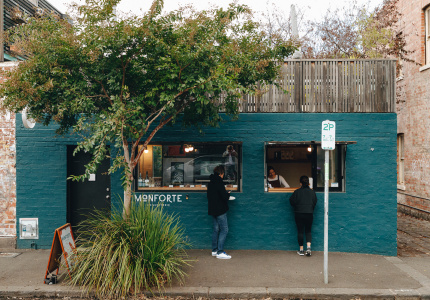 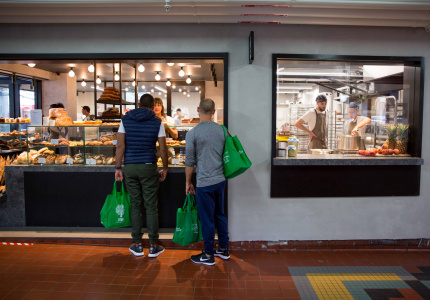