It goes without saying that fried chicken is a gift bestowed upon us by the poultry gods. And it's always fun to forego cutlery in such a snazzy space. 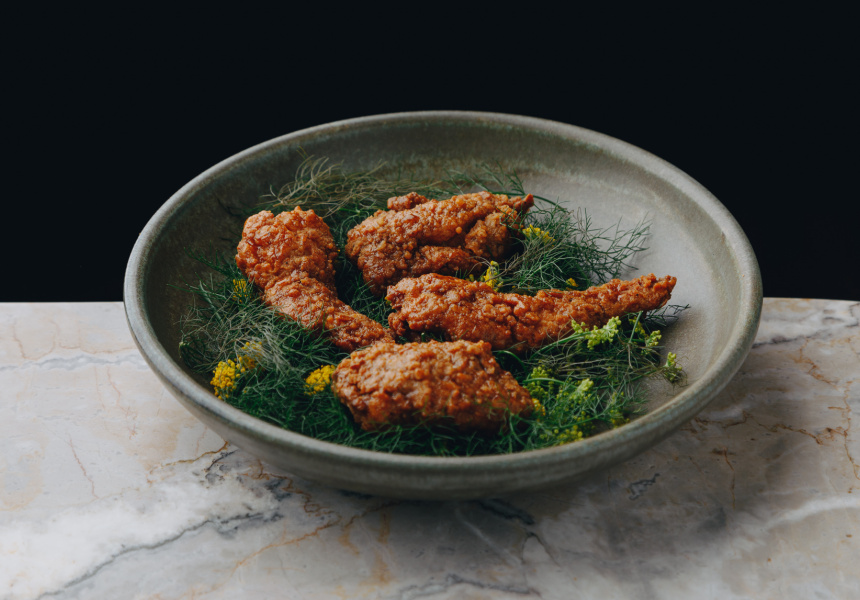 In last month’s “I Can’t Stop Thinking About”, I harped on about my obsession with a part-deep-fried, part-umami-wodge of a dish. And here we are again, with Cutler & Co.’s fried chicken. The difference is, where last time around I was a staunch proponent of sharing, in this instance I implore you: do not share this dish.

Launched as part of Cutler's spring degustation, the sticky, salty, aniseed-y goodness of “fried chicken, wild fennel glaze” has since moved across to the bar menu, which Andrew McConnell says is due to demand. In the dining room it manifests as fried, boneless legs, but in the bar you’ll get a combo of leg and wing. It makes a spectacular drinking buddy; I highly recommend commandeering a solo spot at a high-top marble table, ordering a Wildflower Brewing Gold Ale, and settling the heck in.

It goes without saying that fried chicken is a gift bestowed upon us by the poultry gods (and it’s an interesting coincidence “fried” so often auto-corrects to “friend”). But what’s so mind-blowing about this version? Price wise, it’s $16 for four rich little morsels, which is what you’d pay at a more casual spot, and you get the added swank of a McConnell encounter.

It’s best described as a take on buffalo wings. Normally coated in a fiery, neon-orange solution, at Culter the chicken is glazed with a clear, hot, sweet and sour wild fennel syrup (“kind of like a green Tabasco glaze with pine,” says McConnell). The meat is deboned (mostly – the wings are left with a little handle), brined in buttermilk with fennel and coriander overnight, then left in a spiced flour for another eight hours, deep-fried and tossed in the glaze.

The result is a little bowl of rich, heavy and salty nugget-like numbers sitting atop a little bed of fennel sprigs that provide sprightly pops of freshness. And you use your hands – always a bit of a lark to forego cutlery in such a snazzy space.

“I don't want to make eating in a fine diner stuffy or predictable,” McConnell says. “Most customers are surprised to have something playful like fried chicken feature on the degustation menu, sometimes shocked – but in a good way. Especially when you tell them to eat it with their hands. There can be a bit of doubt in their eyes initially, but then the penny drops once they get into it.”

Gladly, he’s on board with the whole dining-solo scenario too.

“If you are in the Cutler & Co. bar and order a whole plate of it on your own there will be no judgement at all,” he says.

“I Can't Stop Thinking About” is a series about Melbourne dishes Broadsheet Melbourne editor Ellen Fraser has an unnatural obsession with.