Piled high on a plate, they’re glossy and aromatic – a very pleasant triple-decker of flavour. 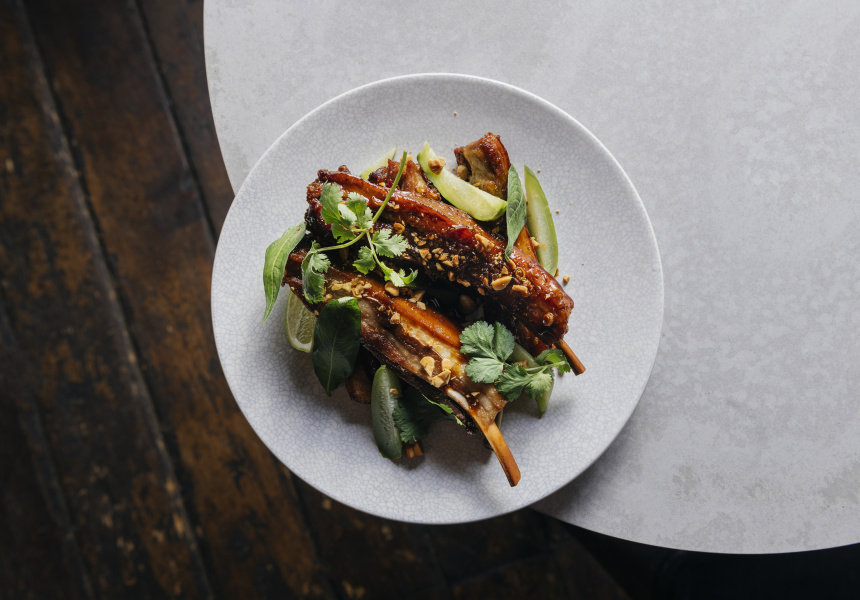 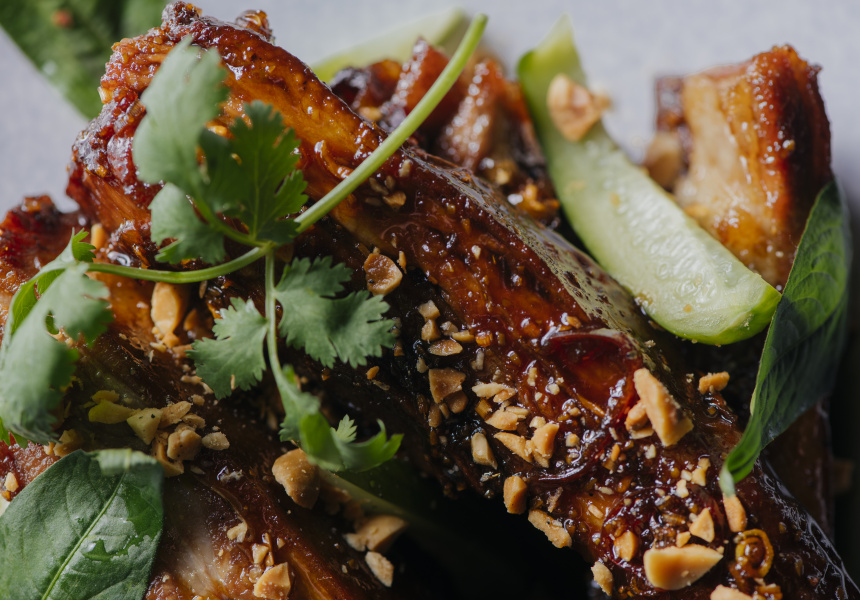 I’ve spent a fair bit of time at The Broadsheet Kitchen at Saint Crispin’s second residency, featuring Matti Fallon (of Princes Pies, and formerly Du Nord), and I’m distressed that I now have less than three months left with its sweet and sour lamb ribs.

Fallon’s menu is a high-concept play on the suburban Chinese food he grew up eating in Dromana. Fried rice. Deep-fried ice-cream. Sweet and sour pork.

The latter inspired the lamb rib dish, and like most of the items on Fallon’s menu – developed with Saint Crispin head chef Stu McVeigh – they riff off but don’t replicate the original versions Fallon grew up with. The food is familiar and unfamiliar at the same time. A contemporary twist here. A refined adaptation there.

The ribs are an outright highlight. They arrive piled high on a plate, garnished with crushed peanuts and pickled cucumbers. They’re glossy and aromatic and you can distinctly make out several layers in the architecture of each one. Those layers are effectively different ribbons of taste and texture. If you look long enough (and I have) they resemble those cross-sectional images of the earth’s crust, only instead of mineral deposits they’re meat and fat deposits. And they form a very pleasant triple-decker of flavour.

Layer one. The lean meat. Juicy, sweet, caramelised. Before they hit the fryer, the ribs are slow-poached over three or four hours in a master stock made from dark and light soy sauce, spring onion tops, rock sugar, dried mushrooms, ginger, garlic and Shaoxing wine. All of which infuses the meat with a subtle sweetness.

Layer two. Buttery fat. Lamb ribs are fattier than their pork and beef cousins, and that’s a good thing because fat is the flavour courier. Nick Connellan, Broadsheet’s publications editor, described this layer best at a Broadsheet Kitchen editorial dinner last week: “Usually I want fat to be rendered. But this – it’s like marrow.” That softer, gelatinous fat adds a decadent element to each mouthful of crunch and acidity and sweetness.

Layer three. Or: the top, crispy deck of fat (what McVeigh describes as more of a “cap” fat.) After they’re slow-cooked in stock, the ribs are fried and caramelised. In the process that top deck becomes nice and chewy, and the lamb meat becomes a bit porous, making it the ideal surface to absorb a generous dousing of sweet and sour sauce they’re covered in once they’re out of the fryer. Fallon and McVeigh won’t give too much away, but the dressing contains sugar, vinegar, fish sauce, sesame bean paste, ginger and other aromatic spices. It’s delicious. Sweet but not too sweet. A good dose of sour.

A sprinkle of crushed peanuts at the end adds crunch and more texture, and aromatic herbs and a squeeze of lime cut through the fat.

The rib meat falls straight off the bone as soon as you take a bite. It’s tender and juicy, crispy on the outside, and lacquered to the hilt in an amber, sticky slick that’s a gratifying balance of salt, sweet and acid.

You won’t be able to stop at one. And I’ve given up trying.

Growing up, I wasn’t a sweet and sour girl. Kung pao or black bean sauce – they were my go-tos at our local Chinese restaurant. But I’ve been converted.

“I Can't Stop Thinking About” is a series about Melbourne dishes the Broadsheet editors can’t get out of their heads.