A new spot to pick up fine European cheeses and smallgoods, or drop in for a glass of wine and a meal. 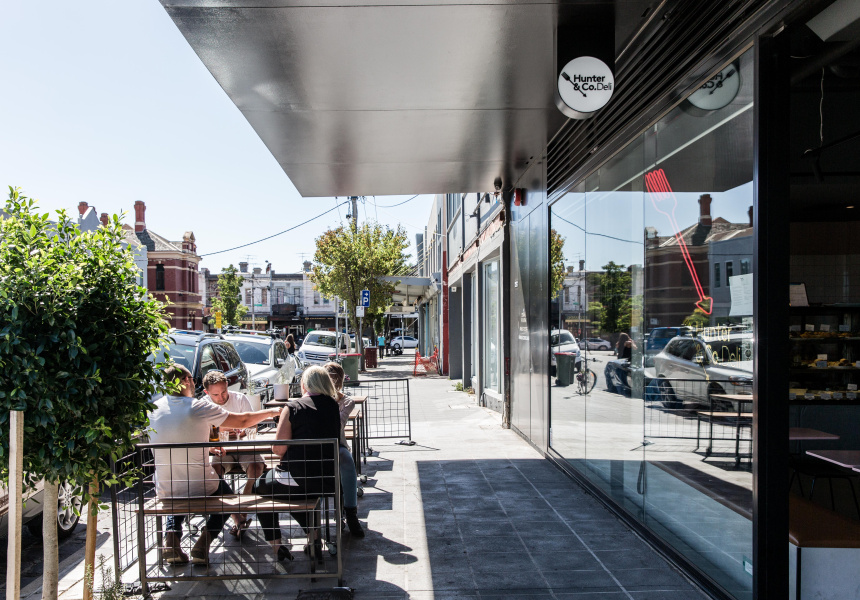 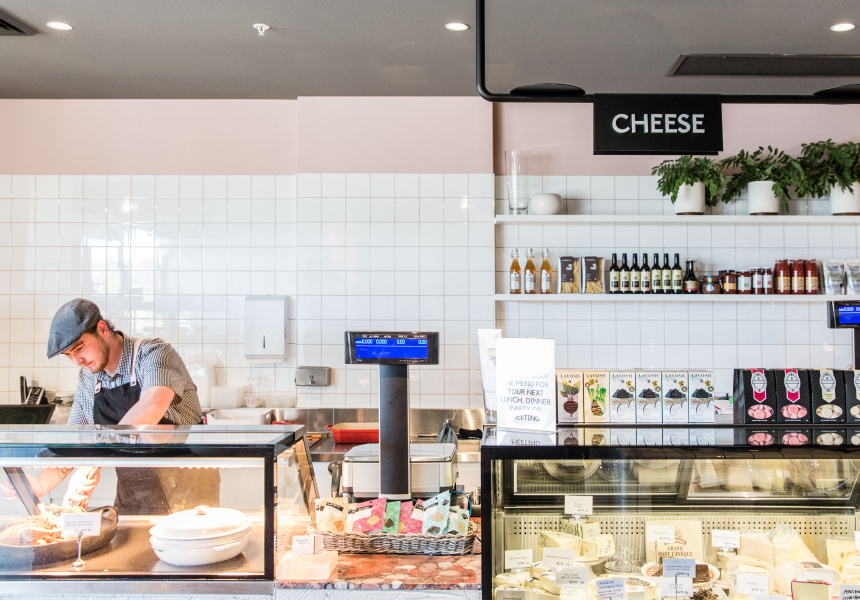 Charlotte Spong and Ben Jager are partners in life and business. They first started Hunter & Co Deli in Croydon in 2013, when Spong was on maternity leave with their twins.

“The plan was that we’d do this short term lease with the dream of bringing it closer to home,” Spong says.

Now that dream has been fulfilled – the original site has closed, and the couple has re-opened in Elsternwick. Mim Design is responsible for the fit-out, which includes bocconcini-inspired lights above the front counter.

“The interior is linked to a lot of food elements,” Spong says. “A concrete pour with chunks of stone in it resembles a piece of salami. The fronts of our deli fridges are done by the same person, and made to look like a camembert or a brie. It’s subtle and then when you tell people about it they go, ‘That’s it, that’s the link.’”

Jager has front-of-house experience at Nobu, Stokehouse and Pei Modern, and the couple worked together at Melbourne Wine Room.

“Between Ben and I, you might find us behind the coffee machine or slicing ham in the deli section,” Spong says. “We’re jack of all trades really.”

The venue is named after Jager, whose name means “Hunter” in German. The “& Co” refers to Spong and others that lend a hand. That includes her parents, who grow organic vegetables in Dromana for chef Matt Woodhouse (ex-Mr & Mrs Anderson).

His menu includes slow-cooked lamb shoulder with pumpkin and romesco; eggplant ragu with poached eggs, toast and labne; and marinated sardines on toast with pickled grape. Coffee is from Allpress.

Of course, this wouldn’t be a deli without a substantial take-home selection. There’s tinned seafood; dried pasta; condiments; good quality stock; European cheeses and smallgoods; and unhomogenised milk, butter and yoghurt from Warragul’s Butterfly Factory. Chooks, lasagnes and salads are available when you need a night off cooking, as well as picnic boxes to take to the park opposite.

We’d recommend sitting in, though. Hunter & Co is licensed and sells Mornington Peninsula’s Garagiste wines by the glass. Alternately you can grab a bottle from the shelves and pay corkage to drink it there.

There are 12 seats in the wine room slash bottle shop, 15 more in the main area, and 18 outside. But "Ben’s Bench" is right in the action. “You can sit there and watch the chefs prepare your meals, or your breakfasts, and have a chat with them at the same time,” Spong says.

Hunter & Co wants to restore that interaction supermarkets no longer provide. “You really lose that one on one, being able to try something, give feedback or ask for something. That’s what we want to differentiate ourselves from,” Spong says. “We’re in a neighborhood, a community, and we want to know the people that come into our shop.”