How to Poach an Egg with Top Paddock

Weekend brunches in Melbourne are vast and varied, but there is one staple that is almost always at the forefront of the menu – the poached egg. Richmond’s Top Paddock shows you how. 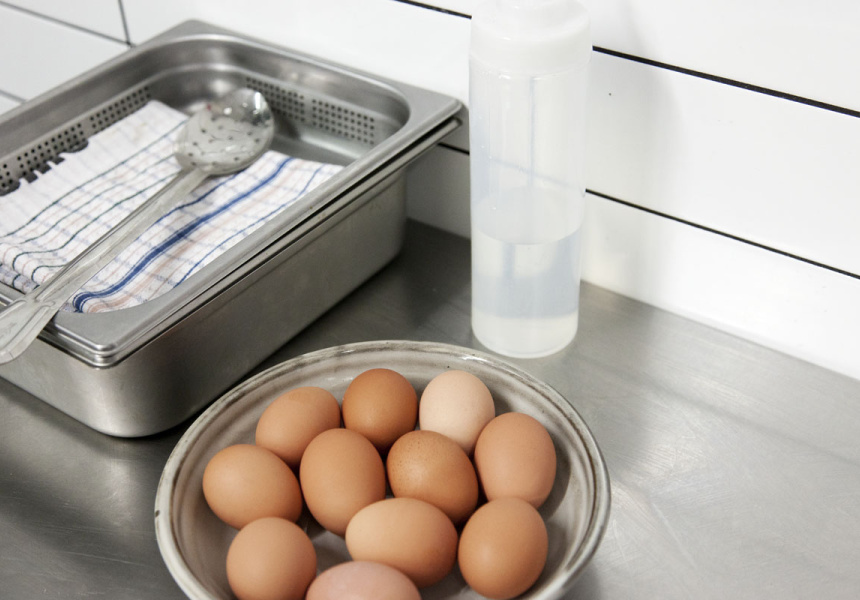 There’s something in the ritual of breaking into the outer layer of a just-poached egg to have the yolk erupt like a delicate, golden volcano onto a bed of sourdough. A perfectly poached egg is both a staple and a luxury of breakfast fare.

The sacred art of poaching seems simple enough, but it’s one we’ve yet to master. Our own attempts at poaching have often led to a stringy, foamy mess that results in an egg that is either too hard or too soft, or one that simply falls apart in the process.

In an endeavour to learn – once and for all – how to poach an egg while still maintaining some semblance of shape or form, we asked Top Paddock’s head chef Jesse McTavish how he gets it so right time and time again.

Richmond’s Top Paddock (from the guys behind Three Bags Full and Two Birds One Stone) has garnered a large and loyal customer base – one that enjoys eggs, it would seem.

“We go through about 4500 eggs a week,” says McTavish. That amounts to 375 dozen eggs, used across their menu in a variety of dishes from the chilli scrambled eggs to the gin and lime-cured ocean trout.

A seasoned professional at poaching eggs (when he flawlessly poached 60 eggs at once during his first breakfast shift in a Sydney deli he knew he was onto a winning method), McTavish says the key to getting a perfect egg on your plate is deep water, a splash of vinegar and fresh eggs.

At the risk of demystifying the secret to poaching presentable eggs, McTavish was kind enough to grant us access to the Top Paddock kitchen to demonstrate his magic touch.

The Eggs:
The Top Paddock team source all their own produce, including the eggs, which come fresh from the Dandenongs. “We specifically request only eggs from young chickens,” says McTavish. “What you want is the egg whites nice and tight around the yolk, which you only get from young chooks.”

The Water:
Despite many people still using the shallow water method, McTavish says this is nothing more than an old French tradition. Deep water (about 20cm–30cm) in a large pot is ideal for poaching multiple eggs.

We need the vinegar to prevent the egg from falling apart, explains McTavish. When the egg is dropped into the water, the ovalbumin in the egg white denatures and the vinegar makes hastens the process. It brings the pH in the water down, making it more acidic and meaning a thin layer of cooked egg rapidly forms, keeping the egg together.