This Turkish dish of poached eggs, butter and yoghurt has been around for at least 500 years. Tulum’s version brings modern techniques into play, to great effect. When Coskun Uysal was a hungry schoolboy in Istanbul, çılbır (say “chill-br”) was the snack his mother made him when she rushed in from work. “She would quickly whip yoghurt, poach an egg, heat butter, hand me pita bread,” Uysal recalls. “I was the happiest boy in the world.”

When he opened Balaclava restaurant Tulum in 2016, he wanted to share Turkish classics but dress them up with contemporary flourishes. His version of çılbır became instantly emblematic of this approach. “It’s the same ideas, the same flavours as the traditional but with more texture and a more composed presentation.”

Almost every table orders the dish, and at least one diner has wept while eating it. “I had a Turkish woman here recently. She was crying as she told me it reminded her of her mum. That was so nice.”

Egg
Belleview Farm eggs from the Yarra Valley are cooked in a sous-vide water bath for one hour at 62.5 degrees to bring them to perfect jiggly translucence. They’re held at 50 degrees for service and cracked to order for each dish.

Smoked yoghurt
Greek yoghurt is strained overnight then loosened back up with a little of the strained whey to bring it to a mayonnaise consistency. A smoking gun loaded with cherrywood chips is used to smoke the yoghurt twice, with 15 minutes between applications.

Brown butter crumble
Butter and skim-milk powder are heated and stirred on the stove for 25 minutes. The powder absorbs the butter; the fats cook to a deep golden colour; and the whole mass turns to a nutty, caramelised crumble.

Chicken skin
Supplied by Moorabbin-based company Gamekeepers. Tulum’s chefs scrub it free from meat scraps and any thick fat, sprinkle it with salt, then stretch it out between sheets of baking paper. It’s cooked at 180 degrees with a heavy tray on top to keep the skin flat. After about 25 minutes, flabby white turns to crunchy golden. The skin is snapped into shards and three are placed on each plate.

Brown butter sauce
Unsalted butter is caramelised in a pan until it’s dark golden, then seasoned with sumac, sweet paprika and a touch of salt. 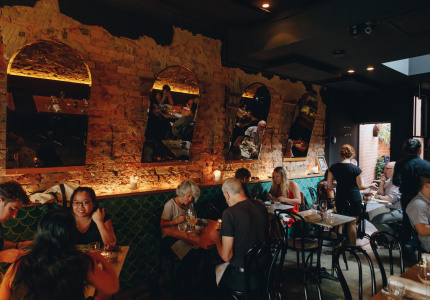