How It’s Made: Ides’ Black Box

The dramatic finale to every degustation at Ides is a featureless jet-black cube. But what’s inside? And how do they put it there? 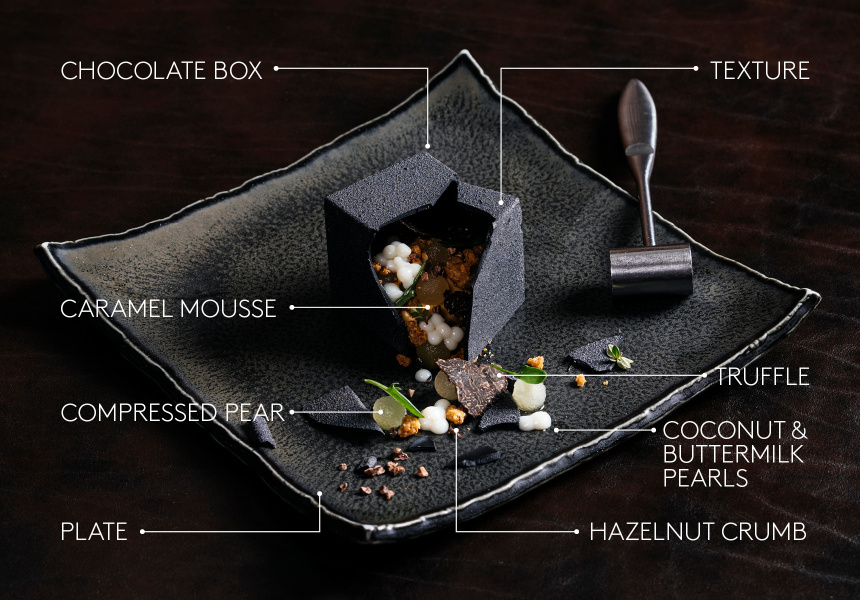 This mysterious chocolate cube is the last of 10 courses at Collingwood restaurant Ides. Owner and chef Peter Gunn added it to the menu late last year hoping to create a signature dish as storied and recognisable as the (now-retired) Snow Egg at Quay in Sydney. “The whole way through the menu we’re trying to keep people engaged and excited about what’s coming up,” he says. This dramatic finale is delivered with a small steel hammer used to smash the box open to reveal the textural, only mildly sweet “tumble” within. The contents change often and could include what we’ve captured here, or perhaps wild thyme, lemon, honey, mandarin, grapefruit ice and pomegranate.

Chocolate box
Properly black chocolate doesn’t exist, so Gunn had to create it. The kitchen roasts coconut shells until they turn to ash, then mixes the ash through white chocolate. Silicone moulds are prepared with vegetable oil then dipped in liquid nitrogen to prevent the oil mixing with the chocolate. After the chocolate is poured in, the moulds are plunged into liquid nitrogen once more. In the early days the kitchen broke “about 40 per cent” of the boxes trying to remove them from their snug, angular moulds. Nowadays it rarely breaks any.

Texture
The box’s first iterations looked too glossy and perfect to Gunn’s eyes. “We had to rough it up a little bit,” he says. The kitchen sprays each cube with a mix of cocoa butter and more coconut ash, using a regular paint gun from a hardware store.

Hazelnut crumb
Blitzed hazelnuts, brown sugar and gluten-free flour, mixed together and toasted. This combination grew out of an earlier dish, a hazelnut tart with caramel custard and shaved truffle.

Coconut and buttermilk pearls
These tiny marbles are formed by trickling a mixture of buttermilk, sugar and coconut into a liquid-nitrogen bath.

Truffle
Shaved raw truffle from Manjimup, Western Australia. This gives the dessert a musky, savoury and lingering – yet delicate – flavour.

Plate
Sourced through Melbourne-based supplier Made in Japan. The plate comes from Gifu Prefecture, which has a handmade ceramics tradition stretching back at least 500 years. Ides started with 38 plates, but it’s now down to 15 – in part due to guests getting a little too frisky with their hammers and accidentally shattering the Black Box and the plate it comes on. 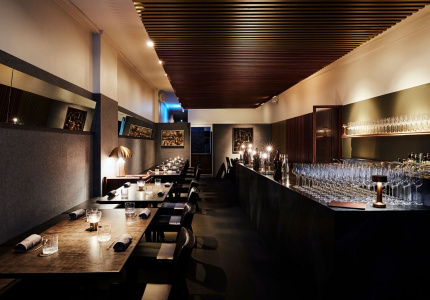