Five years after opening bayside wine bar Hampton Wine Co, a trio of hospitality vets is back in the restaurant game with this small, well-polished venue. They’re repping lesser-known pastas such as paccheri and tortelli, and obscure Italian wine varieties to drink with them. Plus there’s house-made limoncello, best enjoyed in a spritz. 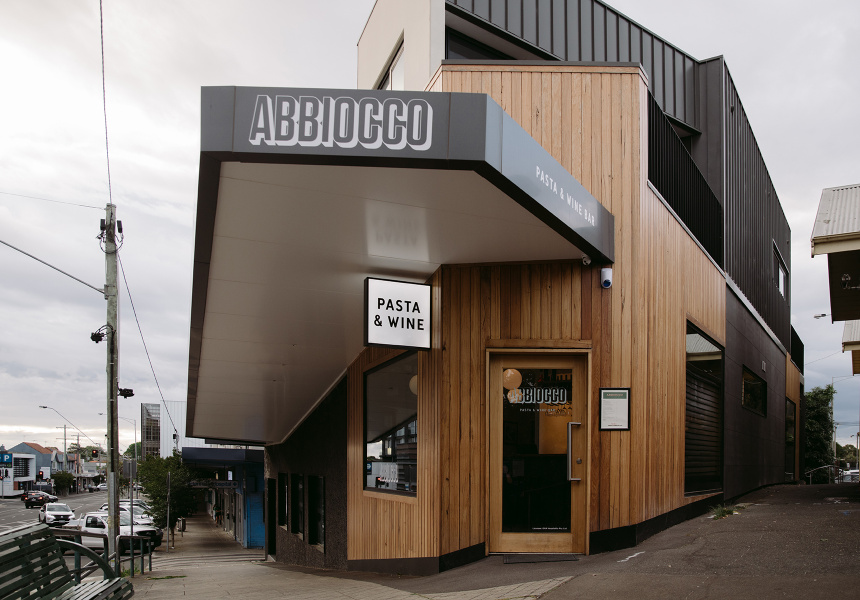 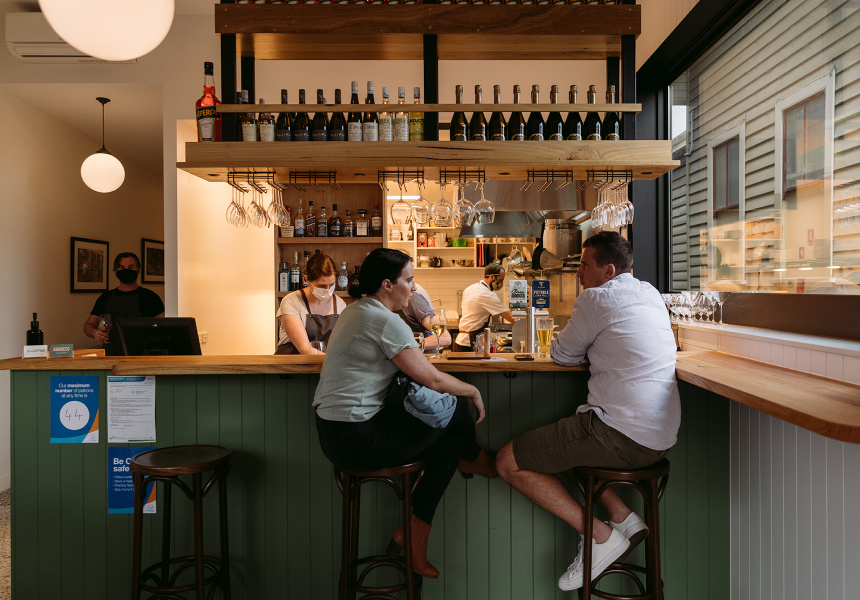 Chef Jarrod Amos and sommeliers Glenn Mill and Pierre Geoffroy met at Jacques Reymond more than a decade ago and worked there together for five years. Following their departure from the now-closed French fine diner and some time spent globetrotting, they reunited and opened the wine bar Hampton Wine Co.

Highett’s new pasta-focused restaurant Abbiocco (pronounced “ab-byok-ko”) is their second venture, and, Amos says, “an opportunity to go back to our roots and have an increased focus on food, in a full restaurant setting”.

The space takes notes from the era of stile liberty – the Italian version of art nouveau – featuring prints of old Vermouth and Campari advertisements on its timber-panelled walls. There’s a front bar if you’re in for a quick drink, and a dining room and courtyard that can seat 30 people each. Front to back, it’s all rather swish, with terrazzo floors and dark-green accents.

“There’s a lot more room to bring sophisticated dining to bayside suburbs, so people don’t have to head into the city,” Geoffroy says. True. And this new option is especially handy for locals prone to the eponymous abbiocco – “drowsiness after eating”, i.e. a sort of food coma.

The carb-heavy menu leans into it. The trio is keen to introduce customers to lesser-known pastas, such as the large, tubed paccheri and the dumpling-like tortelli (which translates to “little pies”, not to be confused with tortellini, even smaller “little pies”).

The former is paired with a classic tomato-basil sauce and That’s Amore buffalo mozzarella, while the latter is stuffed with prawn meat and doused in a stock made by roasting the heads and shells and cooking them down with cream. All the pasta – including gnocchi, squid-ink spaghetti, tagliatelle and pappardelle – is made daily on-site.

Before you get to that, there’s antipasti such as charred eggplant and fontina arancini; Sicilian white anchovies marinated in a traditional sweet-sour mix of vinegar, onions and raisins; and that old classic, San Daniele prosciutto with sliced melon.

This is food that demands an aperitivo, and you’re sorted with the Limoncello Spritz (house-made limoncello, grapefruit, prosecco, soda) and Aperol Margaritas (tequila, Aperol, lemon juice, sugar). The restaurant has also teamed up with Cheltenham brewery Bad Shepherd to create its own Birra Abbiocco – a crisp, low-alcohol, Italian-style lager.

Of course, with two owner-sommeliers, there’s also a decent focus on wine. The majority of bottles come from Italy and showcase lesser-known native varieties such as catarratto, falanghina, primitivo and montepulciano, alongside a few familiars such as pinot noir and chardonnay.

“Like the pasta, we want people to go out of their comfort zone when it comes to wine and not be afraid to ask us questions,” Mill says. In other words, trust this team, which has spent five years and counting running a successful wine bar.

Another tip: don’t leave without trying the tiramisu, which has already reached the stage where it’s too popular to take off the menu. Abbiocco’s Venetian sous chef, Pietro Gatti, makes it the old-school way, sans cream. Each creamy wedge is finished with a fuzzy afro of shaved chocolate.

This article first appeared on Broadsheet on January 20, 2021. Menu items may have changed since publication.