There is far more to chillis than just red ones and green ones. Take a dive in to the heady world of the five peppers that are key to Mexican cooking. For Bruno Carreto, chef and owner of Brunswick’s Los Hermanos Mexican Taqueria, a meal without Mexican chilli is hardly a meal at all. “In Mexico we don’t eat much food without chilli in it,” he laughs. “There are so many different types of chilli that we’re able to create and shape the flavours of the food with the varieties we have.”

In Australia, chillies are typically thought of as either red or green. But in Mexico, there are more than 40 varieties of native chili, each with its own level of heat and flavor. Which is why, in partnership with Connoisseur Gourmet Ice Cream, we've sought out Carreto.

According to Carreto, there are five peppers integral to Mexican cooking, and that he uses every day: ancho, arbol, morita, guajillo and the jalapeno. Each has unique flavours, varying from the sweet fruitiness of the morita, to the distinct roast-capsicum flavour of the arbol – a staple ingredient in red salsas.

Carreto says in Australia it’s a common misconception that chillies are used only to add tongue-numbing spice to dishes. “It kills me a bit when people come into the restaurant and ask for tacos without salsa because they don’t like chilli,” he says. “A taco without salsa – it’s just not right."

“Traditionally, in Mexico, we have lots of different chilli-based salsas on the table,” he explains. “It allows people to build their own level of heat and flavour. It’s really all about adding life to the food, getting that maximum flavour without making the dish too hot.”

In recent years Melbourne has seen the steady rise of Mexican eateries. But Carreto welcomes the competition, because there’s a beneficial side effect.

“In the past two years there’s been a growth in Australian suppliers sourcing true Mexican ingredients,” Carreto says, explaining he sources most of his produce from Aztec Mexican Products and El Cielo.

“It’s amazing for us because we get Mexican people coming into the restaurant and saying our food tastes like home.”

Carreto is enjoying the attention. “Chillies bring life to food and it accentuates so many flavours,” he says. “It’s an ingredient that really enhances a dish. It’s exciting to share that with people.”

Pablo Galindo Vargas, the Mexican-born chef at Los Vida in Crows Nest tells us how to choose the best chilli peppers and treat them right. “If you’re looking for great fresh chilli peppers, then they need to be crunchy,” he says. “Look for unblemished, shiny ones, and like any other vegetable, seal them in a container and use them very fast, within one week is best.”

Atop a traditional Mexican soup made of fried corn-tortilla pieces (Sopa de Tortilla) at Los Amates. The ancho chilli used in this dish is roasted and served with it.
34 Johnston Street, Fitzroy
(03) 9417 0441 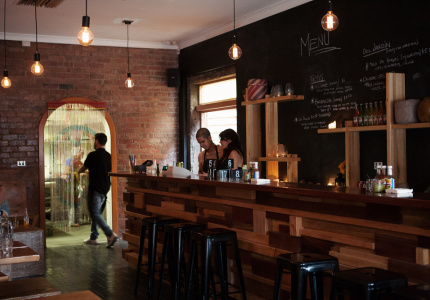