Play “Smells Like Tee Spirit” while you sip on a Teeyonce Knowles in the CBD. 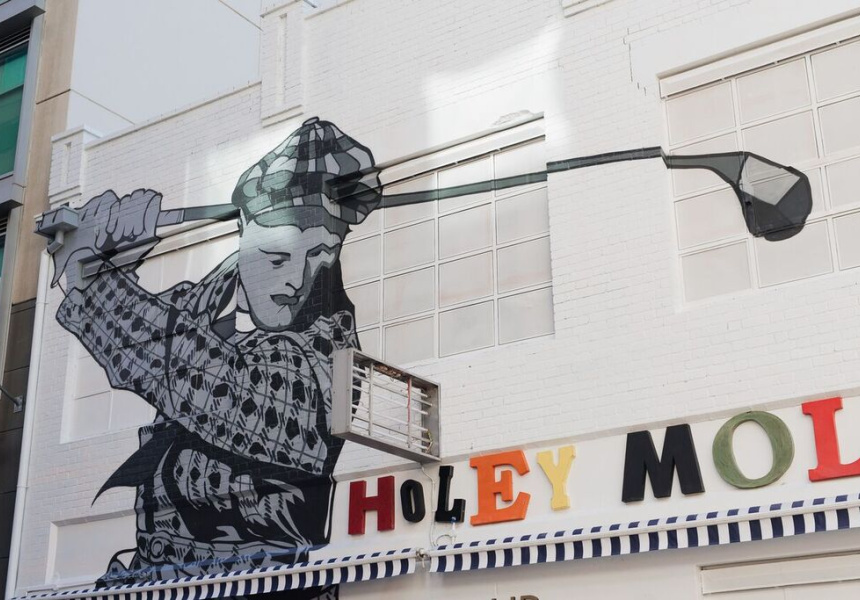 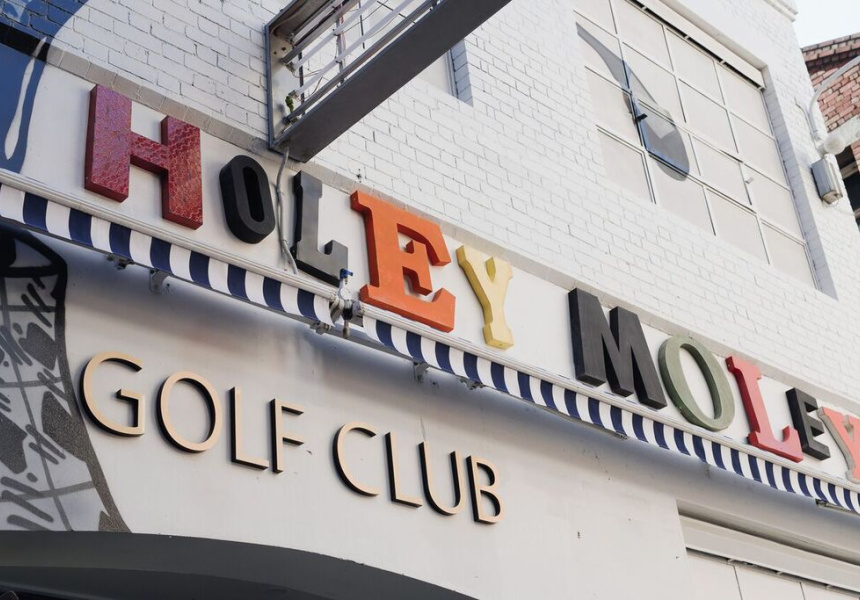 One hole begins by navigating your ball through a refurbished pinball table. From there the ball drops onto a foosball table, and it becomes a two-player game: whoever scores gets a bonus point. Then there’s a Game of Thrones hole, with a throne made from putters.

“It’s not your standard walk through, bang a ball through a windmill,” says creative director Keith Walsh

The original Holey Moley is in Brisbane, and while there are similarities (such as the GOT hole), both courses are different. Walsh says the plan is to keep evolving to make sure there is always something new.

“We have a bank of holes we can keep changing and rotating. As we’re going, we’re learning how to make them easier or trickier or more competitive,” says Walsh.

The concept is by Fun Lab, which owns Strike Bowling and Sky Zone Trampoline parks. Michael Schreiber, the company’s CEO, says he likes tactile concepts like this one. (He saw similar bars in the UK and thought they would work well in Australia.)

“A lot of the holes are more about luck than they are about skill. It’s more about fun and having a good time,” Schrieber says. His favourite is Smells Like Tee Spirit.

“We’ve built a large-scale turntable and you have to hit the ball across the spinning turntable into a hole.”

Building something like this involves a lot of trial and error. The course is multi-level, colourful and loaded with pop culture references, from a Simpsons (Sampsons for legal reasons) lounge complete with couch, to Pac-Man with ghost obstacles.

“It’s not something you can check online to see how it works,” he says. “We’re coming up with the ideas, putting them on paper, then we’re building it. It’s all kind of make-it-up-as-you-go-along and fix it until it’s perfect.”

Cocktails come in red solo cups – the ones you’ve seen in every American house-party film – and the food is simple: margherita or pepperoni wood-fired pizza and chips. Cocktail-wise you can go for a Teeyonce Knowles, Holey Moley’s take on a Cosmo, or a sweet Sugar Caddy, made with vodka, Blue Curaco, lemonade, a dash of raspberry, and topped with coke bottles and sour worms. There are also classics: Sazerac, Old Fashioned and Negroni.

With nine holes downstairs and 18 holes upstairs, there’s plenty of room for groups and larger bookings. But if you want to sink some putts for your office Christmas party, get in quick: as soon as the bar’s opening made the news, people were calling to book for the festive season.