The History of Dinner

Heston Blumenthal’s newest restaurant, Dinner, is now open. We spoke with the chef about the medieval roots behind one of the biggest openings on the planet. Heston Blumenthal at Dinner by Heston 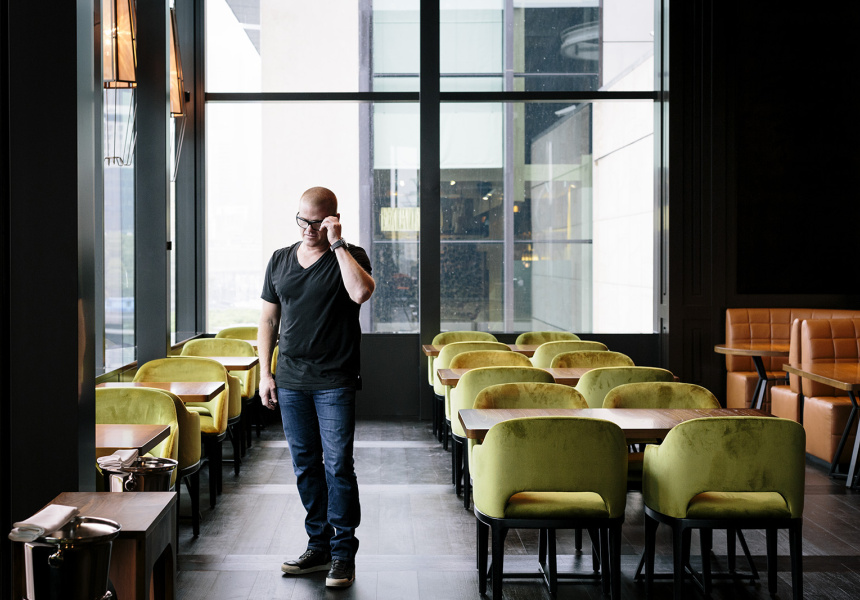 Among the 200-odd recipes of Guillaume Tirel (also known as Taillevent), the chef to the French Valois Kings, the most entertaining is simply entitled, “How to Roast a Chicken and Bring it Back to Life”.

Perfected somewhere around 1355, Taillevent (whose mates called him “Slicewind”) would take a live chicken, pluck it, paint it in wheatgerm, saffron and dripping, stick its head under its belly and rock it gently to sleep. Meanwhile, he’d roast a dead bird, stuffing its neck with mercury and sulphur – which, according to Taillevent, would cause a reaction that sounds like a chicken clucking. When plating up for Charles V, he’d start on carving the genuinely roasted bird, while the other was rudely awakened. His cookbook describes the panicked chook careening down the table, “Upsetting goblets, and whatnot”. That’s Heston Blumenthal’s favourite bit.

That Tirel’s recipe appeals to Blumenthal is hardly a surprise. This is the man who’s made his name serving seafood with edible sand, spume and the sound of seagulls coming out of a shell; whose signature dishes include snail porridge, crab ice cream and mock turtle soup. Blumenthal’s dishes are just as likely to be served in an atomiser as they are a on a plate. No one will be shocked to know he considers a nude chicken escaping during dinner somewhat entertaining.

The cookbook, Le Viandier de Taillevent, began a new phase in Blumenthal’s career – one that moved past the fascination with mid-century British nostalgia at the heart of The Fat Duck, and which delved much further into the history of English cuisine (linked inextricably with French cuisine). Dinner by Heston, which opened this week at Crown, is the culmination of that phase. “You realise that creativity’s nothing new,” Blumenthal says, sitting in a plush green chair by a window over the Yarra, the nearby walls pressed in patterned leather and giant nature morte. “I wondered what it would be like if a chef, with modern knowledge and modern kit, started to play around with these recipes.”

Like its sister restaurant in London, each dish at Dinner has a date by its name, with footnotes and a partial bibliography provided on the back of the menu. The Savoury Porridge, for instance, was inspired by the cookbook The Whole Body of Cookery Dissected, written by William Rabisha in 1660. But it’s not a mere recreation – the “porridge” is a delicate, miniature garden of fennel fronds with flakes of grilled abalone, wedges of pickled beetroot, and a miraculously clean garlic and parsley butter. “The dishes are not replicas,” says Blumenthal. “They’re inspired by. Obviously, we don’t know what the food would have tasted like at the time.”

So, if the dishes are historical, the techniques are clearly not. The kitchen, run by Fat Duck lifer Ashley Palmer-Watts, is aswarm with neatly barbered young chefs over Jospers and waterbaths, stuffing probes and surgical-looking kitchenware into everything. There are, Blumenthal estimates, anywhere between 3000 and 6000 people hours in the development of any one dish. “If somebody knew what we went through just to get the aerated chocolate bars that we serve as petit fours, they wouldn’t believe it,” he says. Dinner’s signature dish, for instance, the Meat Fruit, is a study in care and consistency. Inspired by a medieval folly dug up by Hampton Court, Meat Fruit is a ball of chicken liver pate encased in a startlingly convincing mandarin-like casing. The dish, which has developed over six years of tweaking, is time-consuming and intricate. Blumenthal explains: “You’ve got to cook it really delicately, then you form it into two semi-spheres, and then you form it together with a skewer, and dip it in the mandarin mixture of mandarin juice, mandarin zest, mandarin leaf, mandarin oil, fructose and gelatine. It’s dipped in nitrogen for about five seconds, just to freeze the outside, then it goes straight into the bowl of liquid. As it’s pulled out, the cold exterior sets it and the by-product of this is that you get these little pimples,” he says. “It took years to figure out.”

Obviously, the effect is surprising. But, once you’ve defiled the dimpled sphere and mashed it over a bit of toast, what stands out on reflection is how conservative the dish really is. Meat Fruit tastes, in essence, like really good pate. At Dinner, many dishes are amplifications or intensifications of tastes we already know: the bed of saffron rice around the kangaroo tail is monumentally saffronny, and the chicken cooked with lettuces is sous vide until it’s almost unnaturally tender and brined for a near ham-like flavour. It’s an interesting aspect of Heston; while he works tirelessly to surprise his diners, he’s also extremely careful about their being pleased. “If you give somebody something too savoury or too dense, it’s going to be discombobulating,” he says. “I’m not trying to re-educate people. I do like the challenge of getting somebody to eat something they’ve never eaten. They eat it and there’s a real surprising effect. But I don’t want anything to shock.”

What divides Dinner from the Duck is its lack of theatricality – well, relatively. A fleet of liquid-nitrogen-fuelled ice-cream carts patrol the dining room, spewing scented smoke over all and sundry. But, for the most part, it’s genuinely produce driven, with Blumenthal’s characteristically experimental techniques used to heighten their inherent qualities. They also make full use of Australian produce, altering the recipes to suit local ingredients. “Obviously things that are local here are slightly different to what’s local in the UK, because the country’s so huge,” he says. “Most of the fish here no-one’s ever heard of in the UK. Bass grouper, racewing, gemfish, marron. And they’re all cooked differently.”

There aren’t, however, any resurrected chickens on the menu. But their absence is not for lack of trying: “So we tried the mercury and sulphur – not with a live chicken,” Blumenthal says, and continues, almost disappointed. “Nothing happens when you mix them together.”

Dinner by Heston is now open at Level 3 of Crown Towers in Southbank. 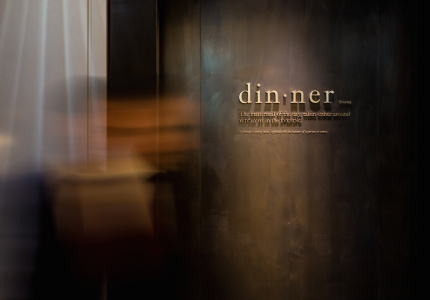